I said to Earth, so cold and gray,

'An emblem of myself thou art.'

'For Spring shall warm my frozen heart.'

I soothe my wintry sleep with dreams

Of warmer sun and softer rain,

And wait to hear the sound of streams

And songs of merry birds again.

I had tried to fall asleep a little bit early on Thursday evening. I had been a little bit fatigued. It had been a solid week professionally. I had stayed up late (for me) for Tuesday night's debate, and still really had not caught up. I had closed my eyes with the Jets and Broncos playing their game on local radio. No idea what happened during that meaningless game.

Next thing I know, all my gadgets start lighting up and making noises. I had known last night that Hope Hicks, close advisor to President Trump, had tested positive for the virus that causes Covid-19 and was apparently symptomatic, so I was cognizant that there was increased overnight risk to the markets.

I sat up. U.S. equity index futures were already in free-fall, and one of my sons (the one who trades) was already knocking on my door to get me up for work. "You heard about the president?" "Yes, son. This is going to get rough."

The news for those who successfully put in an entire night's sleep is that President Trump and the First Lady of the United States have tested positive for SARS-CoV-2. Both as of now are feeling well. The president is as of now capable of carrying out the responsibilities of his office and is quarantining at the White House.

The uncertainties of the day and month ahead now move beyond imagination. The only thing certain about Friday is that the September employment situation, while still key, will not be the headline story.

The president is 74 years old. This virus is a wicked opponent. If you read me often, then you know what I have been through. This virus is not just about survival, it is also about what remains of one's quality of life as well what remains of their intellectual and physical abilities long after the virus has left the body. Let us hope and pray that this passes over the first family without the presentation of symptoms or further spread.

Now, thoughts must move on to how this impacts the election, which is now just 32 days out. Obviously, the president will not be campaigning despite trailing significantly in the polls. Does this further weaken his chances on Nov. 3?

The president shared a stage on Tuesday night with the Democratic Party nominee, former Vice President Joe Biden. Biden is 77 years of age and will need to be watched very closely over the coming days by his medical team.

Beyond the former vice president, the nation is left wondering just how far this outbreak within President Trump's inner circle may spread. Hope Hicks was on Air Force One on Tuesday night, and she did travel with the president on his campaign stop in Minnesota on Wednesday.

Prime Minister Boris Johnson of the U.K. became ill earlier in the year and did need help running that nation from his top lieutenants. Johnson is 56 years old. Should the president show symptoms and become too ill to work, obviously current Vice President Mike Pence, by virtue of the 2016 national election, is second in the line of succession. Let's hope that the president and vice president have not rubbed elbows too closely or late.

Because you were about to ask, after the vice president, the line of succession runs through the Speaker of the House (Nancy Pelosi-D), and then the President pro tempore of the Senate (Charles Grassley-R). The Secretaries of State, Treasury and Defense are the next three in line, in that order.

What Was I Thinking?

As I drifted off last night, allowing the New York Jets to bore me to sleep, I thought about this morning's Market Recon. I thought about Thursday. I had been thinking of the day's positivity from an equities perspective. I was probably going to cover the overwhelmingly positive breadth across our marketplace. I was probably going to mention that there had been a profoundly optimistic move made by the small-cap indices as well as large-cap technology stocks.

I thought it interesting that the industrials, especially the transports, were left behind despite strength (for the wrong reason) in the airlines. Aerospace and Defense also out-performed the sector, but not the broader market. The rails suffered on Thursday, despite a level of reliance on economic growth factors somewhat similar to what drives small-caps.

I was going to write about how Datadog (DDOG) made me feel smart, and Twilio (TWLO) had made me feel stupid. I was going to show you how much I still like the chart of Veeva Systems (VEEV) . I was thinking about whether our leading indices could hold their 50-day simple moving averages (SMAs). All of that seems superficial this morning.

I could think out loud about what happens to markets during a Joe Biden administration. At this time, that would be in poor taste, and a bit premature. We will not yet go there.

Perhaps more importantly, the House of Representatives passed its Heroes Act on Thursday night. Surprising, at least to your author, was how narrow the passage of this bill was at 214-207. Even allowing for the fact that there are 197 Republicans in the House and none of them supported this bill, a number of Democrats voted "nay" as well. Indeed, 21 Democrats either defected to the other side or abstained.

My hope, as an American, would be that maybe this jarring news will shock both sides into a more honest assessment of middle- to lower-class reality. Away from D.C. and a life of luxury, there is human suffering. Compromise. Get this deal done. Today. Today. Today. Today.

Open Message to Our Legislators

If the virus infiltrating the White House is not enough to scare the stuffing out of you, maybe the September data released by the Bureau of Economic Analysis on Thursday will. Yes, income is up from a year ago. Whoop-dee-doo. Every one of you saw Personal Spending rise 1% from August. Everyone of you saw Personal Income contract roughly 2.7% from August. Unsustainable. This is because the stream of help is running down for people who either cannot work, are justifiably afraid to work, or their jobs no longer exist.

Consumer-level inflation surprised to the upside for September. Savings are up? OK, but savings are finite. What then? Credit? The banks are tightening those screws. They have to.

Is inflation scary yet? Not yet. Maybe I should say that inflation remains controlled. Inflation, though, is always scary. Some of you may be too young to remember. I am not. Higher spending on higher prices on lower income. Seems kosher to you?

Open Message to Those Celebrating on Social Media

I have seen a few posts on social media that are completely out of line overnight. You oppose the president? Terrific. Get out and vote. Be heard.

If this is you, you just might be the problem. Get up, go to the restroom. Look in the mirror. That's it, right there. That's what ugly looks like.

I had a couple charts that I wanted to show you. I was going to show you a couple of "Fives." One, I had mentioned Fiverr International (FVRR) last week. That one has/had been working well. Two, I have been looking at Five9 Inc (FIVN) of late, and thought that one close to breaking out. I have not yet pulled the trigger on that name. Neither of these two interesting tech names matters much to me at this moment. What matters this morning for investors is the S&P 500. 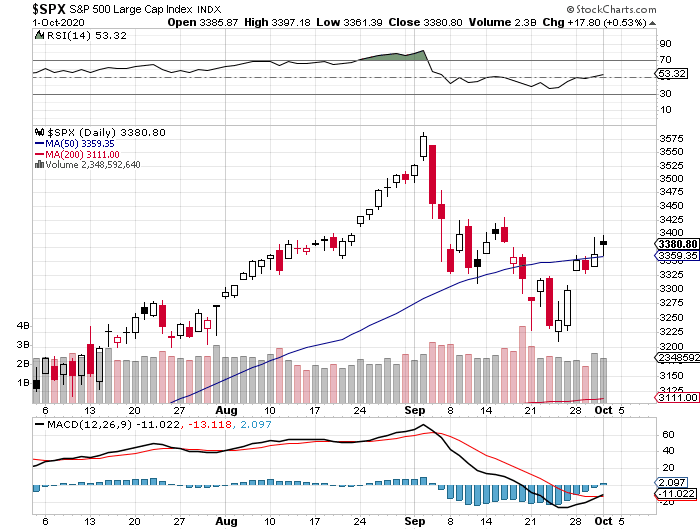 Our broadest of large-cap indices closed just above the 50-day SMA on Wednesday and about 21 points above this key technical level on Thursday. The hour is still early as I finish up this early morning missive, but S&P futures are trading roughly 65 points below fair value still hours ahead of the opening bell. This line is important, especially to portfolio managers and their algorithms.

Can it be held? Going into the weekend? Could threaten to alter the September rebound that equities have enjoyed. Does not look good right now. September job creation in a couple hours. Then again, Congress has the ball.

Get an email alert each time I write an article for Real Money. Click the "+Follow" next to my byline to this article.
TAGS: Economic Data | Economy | Indexes | Investing | Jobs | Stocks | Technical Analysis | Real Money | Coronavirus

Earnings season is still a couple of weeks away, but we have to wonder if Nike is an illustration of what may await us as other reports start to roll in.