Regular readers of my columns on Real Money Pro know that I'm considered a rare bird in today's market.

I care about fundamentals, think long-term and eschew technical analysis. The reality is that I'm what is commonly referred to as a "value" investor.

Many people think that means waiting years to see profits and missing out on the quick gains that come from momentum trading. Sometimes it does take a bit longer to see results based on valuation, but that certainly has not been the case over the past year or so.

Just ahead of the presidential election, traders were nervous. Some were worried that Donald Trump would be reelected, others feared that now-president Joe Biden's policies toward business would knock stocks for a loop.

I doubt many people thought we would see record after record, regardless of who won.

Rather than focus on politics, I was busy picking stocks that would do well and sharing my thoughts on Real Money Pro. 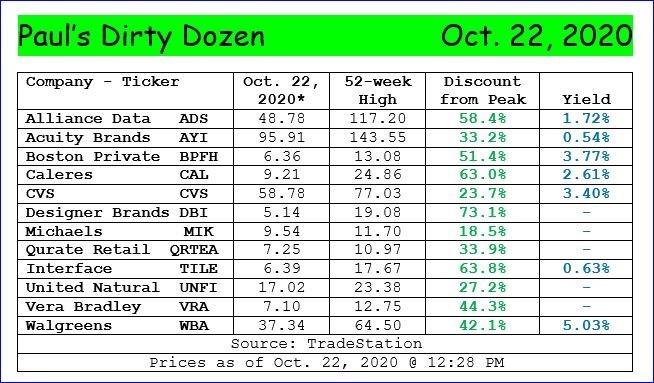 As of 9:48 a.m. on Thursday, these were the results had you simply bought equal dollar amounts of each of my "Dirty Dozen" selections. 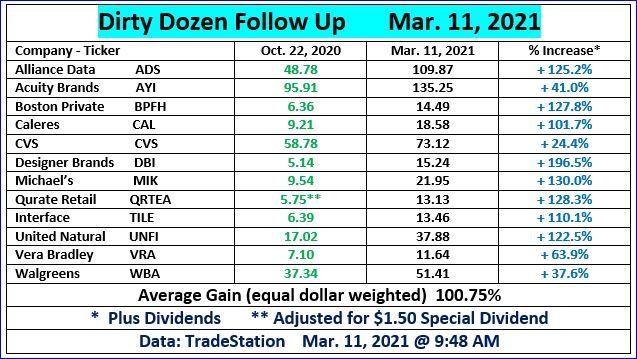 All of the stocks moved up nicely. Eight of the 12 more than doubled over just 119 days. The average return was 100.75%, plus any normal quarterly dividends paid.

Investing in just a few of those names would have paid for your subscriptions many times over.

After the election, some traders thought there were no more good buys to be had. I disagreed and expanded my Nov. 16, 2020 list to 16 stocks.

I deleted CVS Health (CVS) and Walgreens Boots Alliance (WBA) from that second list to make room for a total of six new picks. I still liked and held CVS and WBA, but wanted to put out more new ideas. 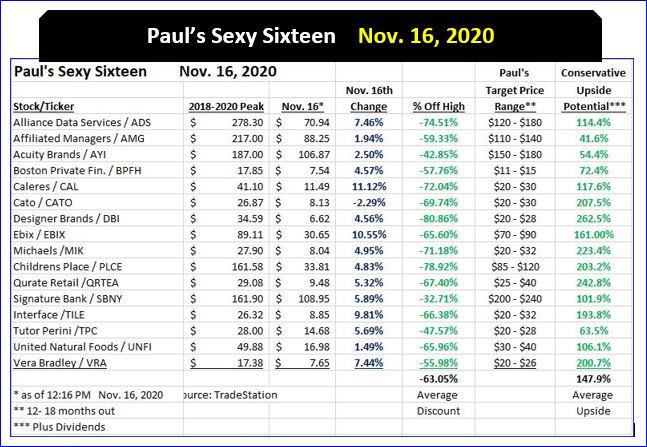 EBIX was the squeaker, initially climbing nicely before being pounded below my recommended price. As of Thursday, though, it was fractionally above where I first included it. I've been a huge buyer of EBIX on the recent drop, taking it up to one of my larger dollar positions. There's no reason EBIX can't get back to $50-$90 within a year.

Amazingly, six of the 16 picks more than doubled from their Nov. 20, 2020 prices in under four months. Buyers of whole group would have made average gains of almost 83% plus dividends. 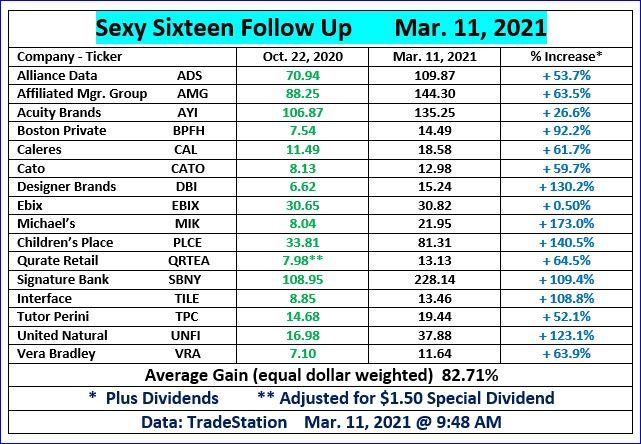 Two of my picks, Boston Private Financial Holdings (BPFH) and Michaels' (MIK) accepted take-over bids since I wrote about them.

I am completely out of BPFH these days, as it was an all-stock deal and I don't fancy the shares of the acquiring firm SVB Financial (SIVB) . So far, though, that stock has continued to rise since the deal was announced. Oh, well.

You'd be smart to ask if a rising tide lifted all boats. It did, but not nearly to the extent that my selections elevated.

As always, past performance is no guarantee of future returns. That said, I'm proud of my track record and gratified that so many of my readers have let me know how much they've made by owning some, or all, of these names.

(This article originally appeared on Real Money Pro on March 12.)

Get an email alert each time I write an article for Real Money. Click the "+Follow" next to my byline to this article.
TAGS: Fundamental Analysis | Investing | Markets | Stocks | Trading | Value Investing | U.S. Equity