Aha! You see, we knew there was a reason the Transports were acting so poorly. And now comes FedEx (FDX) with the news of an earnings disappointment.

Let's look at the chart of FedEx and note that $150 has been support quite often this year. Sure, in October it had the plunge underneath that lasted for a few weeks, but was not sustainable.

I fully expect if the markets are up on Wednesday, the narrative will be that the Transports don't matter. They do matter. Do they matter at the minute that the divergence takes place? No. But ultimately, they will matter if they can't get going.

What I would love to see on the FDX chart is a break under $150. Why? Because that would bring out hysteria. You know the sort I am talking about, when every chart person in the world draws in the line and shows us how it is at a lower low. You see, if FDX can snap $150 and then rally, we'd know we'd cleaned out the sellers. And then any good news would be a plus for the stock.

I realize Apple (AAPL) is a very different company than FedEx is, but recall last January when Apple had its bad news and it was poised to break those previous lows. There was some serious hysteria about that. I remember, because I said -- right here on these pages -- that a break and a snap back were bullish and therefore anything in the $140 area was bullish. Apple has since just about doubled.

I am not saying FedEx is a similar company with similar dynamics to Apple, but when a chart is already down and out and a break of a well-watched level doesn't materialize into any more selling, it's important to pay attention.

The market started acting overbought mid-morning on Tuesday as it tried to rally, but the momentum just wasn't there. The breadth of the market has been good -- and thus the indicators are bullish -- but it has been green for each of the last 10 days and that makes it short-term overbought.

I know sentiment seems giddy, but statistically we don't have the data behind it yet. We sit on the verge. But days like Tuesday don't tend to get us there, because flat days in the market remove the excitement. Therefore the Daily Sentiment Indicator (DSI) backed off to 81 for the S&P and 80 for Nasdaq. 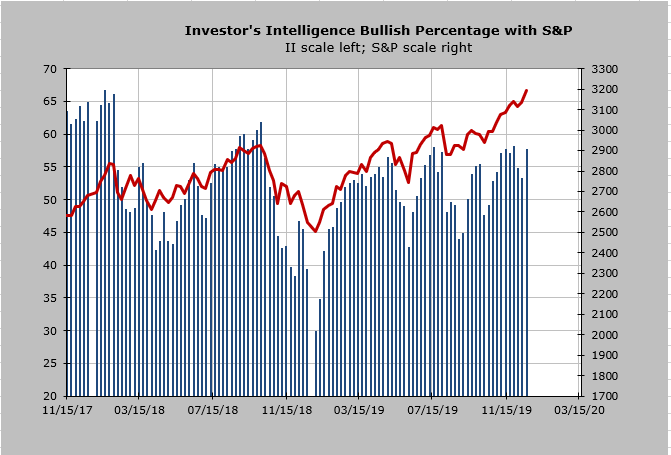 The Investor's Intelligence bulls added our points and are now at 57.7%, a few ticks from where they were just prior to Thanksgiving. But they are not quite over 60% yet.

The S&P 500 and Nasdaq have been green for five straight days. The S&P hasn't gone to six since April and Nasdaq hasn't done it since July. With the market overbought, no one should be surprised with a pullback later this week.

Get an email alert each time I write an article for Real Money. Click the "+Follow" next to my byline to this article.
TAGS: Earnings | Investing | Stocks | Transportation |