All of the major equity indices closed higher Friday with positive internals but on lighter trading volumes than the previous session.

Chart improvements were seen on the Dow Jones Transports (see below), which closed above its short-term resistance as well as its 50-day moving average, turning that trend positive. The same events occurred on the Russell 2000, which remains neutral.

As such, all of the indices are now above their 50 DMAs with all trends remaining neutral except for the Transports mentioned above. 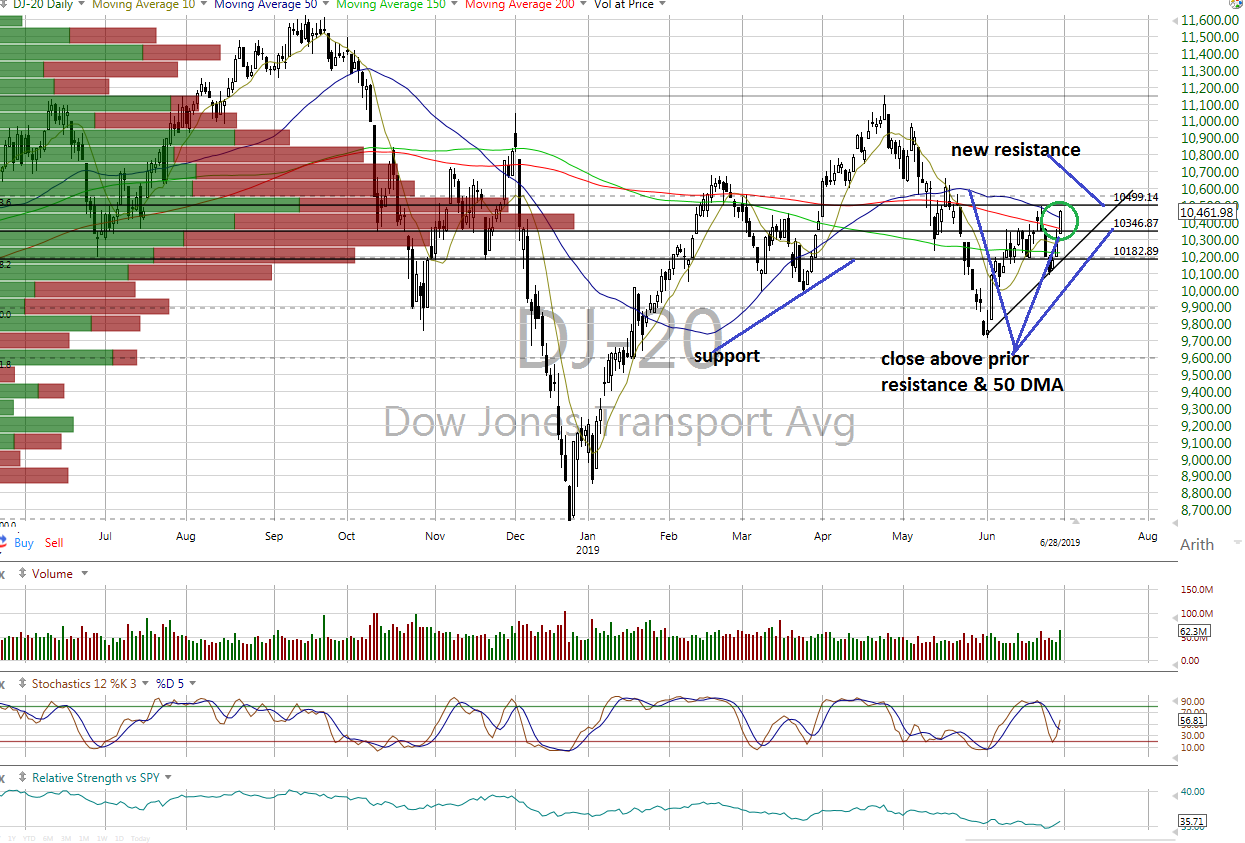 The high "volume at price" (VAP) levels are supportive on the S&P 500, DJIA and Nasdaq 100 and resistant for the Nasdaq Composite, S&P MidCap 400 and Value Line Arithmetic Index.

The cumulative advance/decline lines for the All Exchange, NSYE and Nasdaq are positive and above their 50 DMAs.

The data remains generally neutral although the one-day McClellan Overbought/Oversold Oscillators are now in overbought territory on the All Exchange and Nasdaq while the NYSE's remains neutral (All Exchange:+51.18 NYSE:+47.02 NASDAQ:+56.16).

The Open Insider Buy/Sell Ratio continues to see a pickup in insider buying activity from 59.5 early last week to 105.6. However, it remains neutral as are the percentage of S&P 500 stocks above their 50-day moving averages (71.7) and detrended Rydex Ratio (contrary indicator) at +0.22.

Last Tuesday's AAII Bear/Bull Ratio (contrary indicator) found bearish crowd sentiment persisting at 36.0/25.67. We continue to view this lack of enthusiasm on the part of the crowd as a positive.

The S&P 500 is trading at a forward P/E multiple of 16.8x consensus 12-month earnings of $174.63 per share, while the "rule of twenty" fair value multiple is 18.0x, suggesting the S&P is somewhat undervalued at these levels.

While there has been some technical improvement on the charts, there has not been enough of a shift in them or the data to cause a change in our near-term "neutral/positive" outlook for the major equity indices.

Get an email alert each time I write an article for Real Money. Click the "+Follow" next to my byline to this article.
TAGS: Indexes | Investing | Markets | Small Cap | Stocks | Technical Analysis | Transportation