Anyone who showed up in early October for the bullish seasonality and forgot to buy the SPDR Dow Jones Industrial Average ETF (DIA) isn't feeling all that great. But now, with DIA threatening to break beneath its 10-day exponential moving average (EMA) for the first time since soaring above it on Oct. 13, even the boring, old DJIA stocks are looking tired. 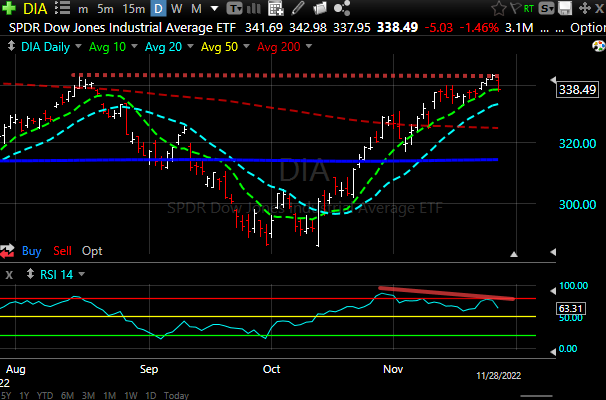 The DJIA aside, I've also seen a noteworthy increase in the number of investors who normally downplay the value of technicals and chart patterns but are all concerned by the DIA stalling near its mid-August swing high and the SPDR S&P 500 ETF (SPY) struggling to break above its declining 200-day simple moving average (SMA). 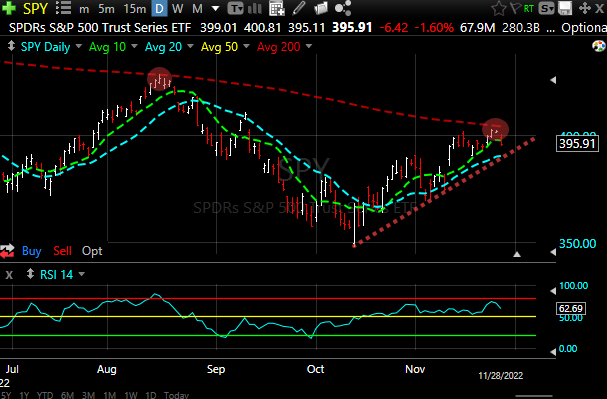 I don't see much of an edge trying to buy SPY at its current level. With SPY holding above its 21-day EMA and the 14-period Relative Strength Index (RSI) sitting well above 50, I'm not bearish on the S&P 500. But given the proximity to the declining 200-day SMA, I'd rather buy SPY against its 21-day EMA (to reduce my risk) than right here, between the 21-day EMA and 200-day SMA.

Regarding the Invesco QQQ Trust (QQQ) , while the ETF hasn't gained any net ground over the past 11 trading days (similar to SPY and DIA), there's no denying how crummy the daily chart looks. Sure, QQQ has held above its 21-day EMA since Nov. 10. But Monday's close on QQQ was less than a nickel above its close on Nov. 10. If you're trying to do anything other than scalp QQQ for dimes or quarters in this environment, you're probably taking a few years off your life.

Monday morning Rev Shark noted that the market had lost significant ground the last three times Fed Chairman Jay Powell has stood in front of a microphone. With Powell speaking at the Brookings Institute on Wednesday and the indexes looking a bit vulnerable, this may be an excellent time to trade a lot less.

Get an email alert each time I write an article for Real Money. Click the "+Follow" next to my byline to this article.
TAGS: ETFs | Index Funds | Indexes | Investing | Stocks | Trading | Real Money