Vince from "ShamWow?" Uhm. No. You would not know that Monday's 2.5% rally still left Tesla (TSLA) down 4.4% for December. Tesla shares gave up 11.9% back in May. It had been smooth sailing ever since.

The stock turned for the better on Dec. 22. What happened that day? CEO Elon Musk, who had made a Twitter game of having to sell 10% of his initial stake in the firm for tax purposes, announced that he was done with those forced sales. The stock had traded at a discount and the market had effectively absorbed that discount.

Dec. 22 was also the day that we learned that the NHTSA was investigating Tesla over vehicles with Passenger Play installed on the front center touch screen allowing for gameplay while the vehicle was in use. Tesla has informed the NHTSA that the Passenger Play feature would be disabled.

Tuesday morning. Tesla has now been red hot for days. Totals for fourth quarter deliveries are due next week. Wall Street is in love. Right now.

On Monday night, five star (at TipRanks) analyst Dan Ives of Wedbush reiterated his "overweight" rating on Tesla, while increasing his price target to $1,400 from $1,100. Ives cited strong demand from China, as well as new factories built in both the U.S. and Germany as factors. Ives said, "The linchpin to the overall bull thesis on Tesla remains China, which we estimate will represent 40% of deliveries for the EV maker in 2022." Ives goes on to mention that he sees chip shortages easing in 2022, which should allow Tesla, as well as competitors, to meet growing demand. Ives sees Tesla delivering 1.4M to 1.5M vehicles in 2022, with an improving margin profile.

Tesla could report fourth quarter deliveries anytime between this Saturday (January 1st) and next Wednesday (January 5th). Consensus seems to be for around 277K vehicles, comprised primarily of the Model 3 and Model Y varieties and a small portion of the Model S and Model X types. For the third quarter, Tesla delivered 241,300 vehicles which beat the street's central estimate of 232K coming into that report. Last week, Joseph Spak of RBC Capital Markets projected deliveries of 285K vehicles.

Currently, or as recently as September, a rough two thirds of all U.S. electric vehicles are Teslas, as the space has quite recently become more crowded with the likes of Lucid (LCID) , Rivian (RIVN) , Fisker (FSR) and several others having entered the arena even if they are not far along in their collective ability to deliver. Who has been better able to compete in the space has been the legacy automobile manufacturers such as General Motors (GM) and Ford Motor (F) . Both have been pouring investment dollars into catching up from a technological perspective and both have seen their ability to deliver only hampered by the ongoing chip shortage.

One item going forward that now seems elusive would be the new electric vehicle credits that would have been part of the "currently going nowhere" Build Back Better plan. This would not only have benefitted the newer additions to the EV race, but also have made both Tesla and GM eligible once again for the credit. That thought must be put on hold for now.

Tesla is not set to report fourth quarter earnings for another month. Currently Wall Street (22 analysts) is looking for EPS of about $1.94, with the range of expectations spanning from $1.39 to $2.61. Wall Street is also looking for revenue of $15.08B. The range there runs from $13.51B to $16.58B. At consensus view, these numbers would amount to earnings growth of 143% on revenue growth of 40%.

The balance sheet is in much better shape than many who take only a peripheral view realize. Current assets are quite a bit larger than are current liabilities. Total assets dwarf total liabilities less equity. The cash balance could easily pay off the firm's total debt-load. The firm's current ratio is healthy.

The only glaring issue for Tesla is the never ending, and seemingly inconsequential question over valuation. Investors do not care as sales and margins grow. They didn't care before the company was profitable. The stock still trades at 177 times forward looking earnings, 330 times trailing earnings, 25 times sales, and 38 times book. That said, free cash flow is positive, has been for three quarters and is now decidedly so. The valuation argument will not matter until portfolio managers are forced to raise cash. This is not today's problem. 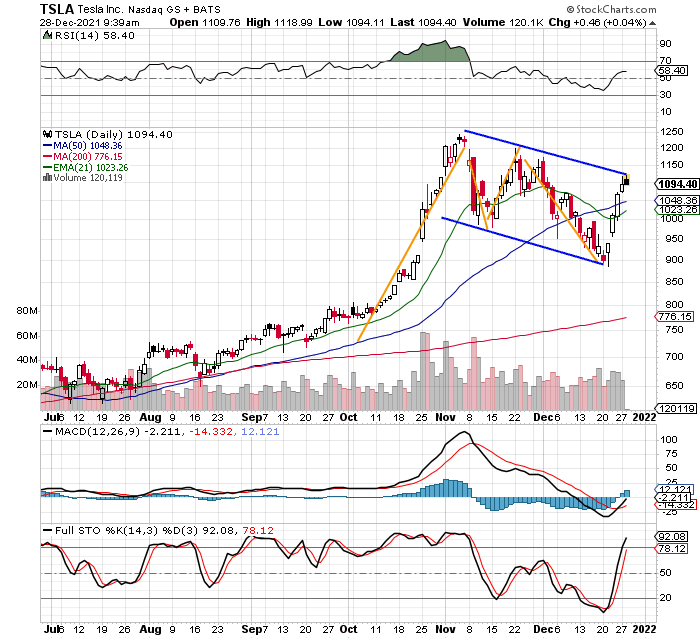 What do you see? Do you see a "double top"? That would have been bearish, and did work as long as Elon Musk was selling shares in size. Do you see a "falling wedge"? I thought I did, and that would have been bullish, but the channel never narrowed. I think we can toss that idea. How about a bull flag? I don't know. Flags generally don't have $300 ranges but Tesla has always been different. I think it might be, and if it is, the shares need to get past the upper trend line, which is where they are trading right now.

You'll see below that I am flat Tesla. That's meaningless. I will probably be in and out of Tesla twice this week. (I also trade LCID fairly often.) I think if the shares take $1,100 and survive at least one retest from above, that this could be a first quarter double or triple. I think $1,000 makes $1,320 possible. and that puts me in agreement with Bill Salesky of Argus Research.

Get an email alert each time I write an article for Real Money. Click the "+Follow" next to my byline to this article.
TAGS: Earnings | Investing | Markets | Stocks | Technical Analysis | Trading | Automotive | China | Electric Vehicles

Regardless how the Fed tea leaves fall today, the recent spike in volatility is likely to be with us for a while.

Shares of Logitech Rally but a Bottom Is Not in Place

Traders could put LOGI on their market-minder and let's see how things develop.