By TIMOTHY COLLINS Apr 20, 2020 | 01:04 PM EDT
Stocks quotes in this article: SPY
Friday, I had concerns. The SPDR S&P 500 exchange-traded fund trust ( SPY)  struggled under $285, trading around $283.50 when I wrote about what could become of bulls if we closed under $285 after such a strong afterhours on Thursday. A strong, even if illogical, late-day rally took those closing price concerns out of the picture.
Fast-forward through the weekend and we get another weak Monday open, but again, bears couldn't follow through. At least, not yet. I still worry about the air underneath the April 17 gap. We kissed it with the open to start the week, but the market ramped strong through the first few hours in a very similar fashion to the closing hours of trading on Friday. We now have to watch the closing high on Friday as well as the intraday highs.
Even if the rally on Friday felt fake or illogical, the trades still printed. We have to respect those. I'm more focused on the closing level, rather than the spike in the last 10 minutes. If you've been following the intraday action closely, you already know that since the human element has been removed from the trading floor, the last 10 minutes of the day have been wonky. Traders aren't seeing Market on Close numbers until around that 10-minute market, then all heck breaks loose.
If I'm watching for reversals Monday on the SPY, $285.35, then $284.90 and $283.85 are the areas of interest for me. I probably put more weight on the latter two, but that's what I am watching.
I wouldn't get overly excited about the cannabis rally today. Having cannabis stocks red on April 20 (4/20) is similar to seeing U.S. markets lower on Sept. 11. There's psychology about those dates that bring out supporters. Obviously, I view one much more meaningful than the other.

To be a buyer here, one truly must believe that the Fed will be there with a bucket, scooping out the water filling the boat and plugging the holes with money.

I can't decide which is more impressive: The market pushing higher in the face of crashing oil or the market pushing higher in the face of insanely higher unemployment data. To be a buyer here, one truly must believe that the Fed will be there with a bucket, scooping out the water filling the boat and plugging the holes with money. That's kind of what we see happening, but the more I talk to small business owners in the area, the more I'm hearing about imminent bankruptcies if there isn't another round of small business stimulus that actually reaches small businesses who need it.
Is it a case of "head in the sand" or hiding behind the Fed's bazooka with full confidence?
I'm pretty sure it's both. If you're long, enjoy the trend as long as it lasts, but keep your eyes on the exit. If you're short, there's not much to say other than fighting the Fed is a tough game. It's sitting short-stacked at the poker table against someone who starts with better hole cards every hand, can push you all-in on every hand without stressing themselves out, and has no fear. It doesn't mean you can't win, but the chips are stacked against you ... pun intended.
none 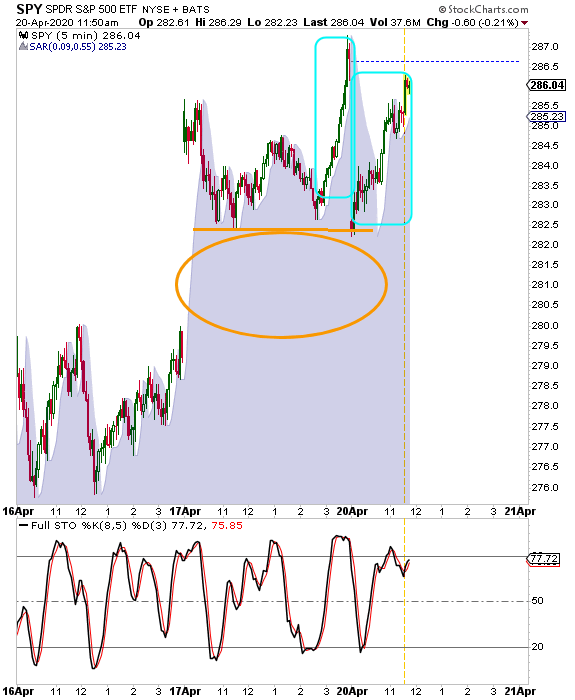 Get an email alert each time I write an article for Real Money. Click the "+Follow" next to my byline to this article.
TAGS: Small Business | ETFs | Federal Reserve | Investing | Options | Stocks | Cannabis