There seems to be a great debate over whether we have inflation and if we have it, if it is transitory (as the Fed believes) or if it is here to stay. Up until this week, there was also another great debate in the markets: Are the work-from-home-stocks done or just taking a breather?

After Tuesday's action, it seemed folks had made their decision: Work-from-home stocks -- last year's winners -- are this year's losers.

And all those folks who thought stocks were just dandy in mid-April? Now they are writing missives about why stocks are ahead of themselves and how corrections are normal and natural. Yes, I know the S&P is where it was in mid-April, but the fact that Tuesday's decline spurred these folks into changing their tune says a lot about sentiment.

I can't tell you that the put/call ratio was super high; it was .86 (recall Friday was .95), but it definitely was a sharp rise from last week. What I can tell you is we saw the sentiment shift in terms of the volume.

Nasdaq's volume was the highest in six weeks. Remember, volume tends to rise when stock prices fall. It's the fear of losing that overcomes people. The Invesco QQQ (QQQ)  saw their highest volume since March 24. Notice how high down volume days tend to lead to short-term rallies. 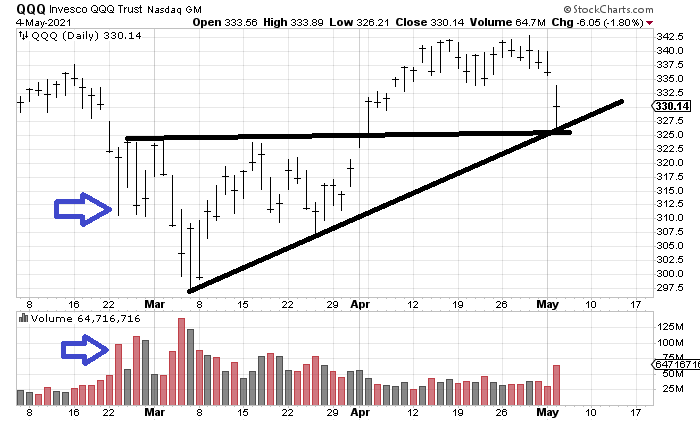 I have put in two blue arrows, because while Tuesday's volume wasn't nearly as high as that volume in late February, it was the first significant rise in volume we saw when we tumbled from those highs. I would say this is similar (not exact) to that.

I would also point out that the QQQs bounced off an uptrend line and a flat support line. My guess is we see something similar to what we saw in late February, meaning a short-term bounce.

I would add something more, another reason I can see a short term bounce. The number of stocks making new lows on Nasdaq did not expand beyond mid April's peak reading, yet Nasdaq made a lower low. That's a minor positive divergence.

Finally, we all know the semis have led the way lower. The Semiconductor Index -- SOX -- is down 10% from the highs. In the last month the SOX has had exactly five green days. And only once were there consecutive up days. Yet squint hard and you can see the SOX outperformed Nasdaq on Tuesday.

Lastly let me point out the SOX has a one-year uptrend line that was tested on Tuesday. It really ought to bounce in the short-term. It would give technology players some relief.