Shares of the e-commerce giant sank on Friday but that is more of a consequence of macro headwinds stemming from NSA hacking announcements, blustery talk from policy advisors, and apprehension over upcoming tariffs than it is from anything wrong with the company. Alibaba stock declined by 2.78% to $144.85 on Friday.

A pivotal piece that is being overlooked as the company's shares retreat back toward their October lows is the rapidly accelerating cloud business, which could become the key story for the company in the future.

"Cloud computing is our long-term strategy," CEO Daniel Zhang said in an interview with CNBC on Friday morning. "Alibaba has transformed from an e-commerce company to a data company to a digital economy."

While the business only accounts for 6% of company revenue as of its last quarterly report, the growth story available in the sector is a remarkable one.

Morningstar analyst R.J. Hottovy told Real Money that it could be similar to Amazon's (AMZN) growth story in the space just a few years ago.

"I see China a lot like Amazon was four or five years ago, as some big names are increasing demand for cloud solutions," he told Real Money in the third quarter. "It could be an important part of their story in the future."

Given the over 90% growth in the cloud business achieved over the past few quarters, the comparison to Amazon might not be overly outlandish.

To be sure, given the more mature cloud space in the United States and the established players in the US market already, Alibaba remains a minor threat.

Wedbush analyst Dan Ives explained in an interview with CNBC that the existing players in the space could severely mute near term growth. 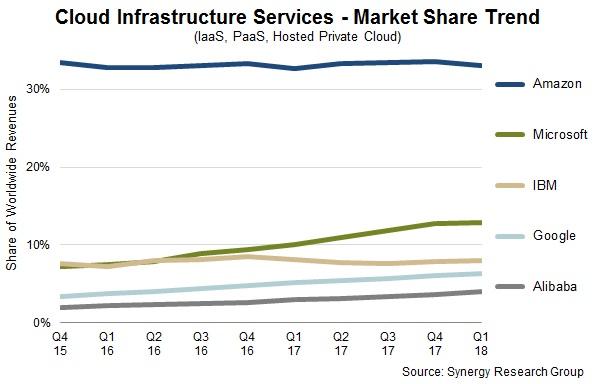 "It's going to be an Everest-like climb for Alibaba," he said. "It's a two-horse race right now with Amazon and Microsoft (MSFT) ."

A Synergy Research Group report from the first half of 2018 notes that Amazon controls 33% of the cloud market, Microsoft 13%, IBM (IBM) 8%, Alphabet (GOOGL) 6% and Alibaba just 4% of the global market. 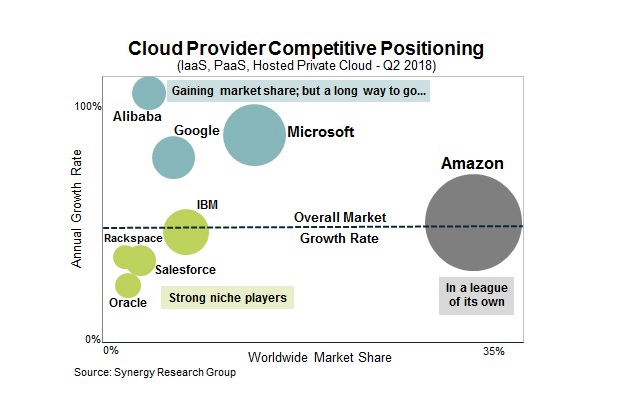 The climb to get into the game against the existing giants will not be an inexpensive one either.

"In the near- to- mid-term it is important to remember that this build out is causing the segment to be unprofitable, a trend should be expected to continue for the time being," Action Alerts Plus analyst Zev Fima said. "That said, if it's anything like what we saw with Amazon, it should serve to expand margins in the long run, once the massive investment cycle necessary to build out the cloud starts to wind down."

Fima and his team remain bullish on the cloud in general, and noted that the company's shift away from its core commerce business is a wise one.

"If you believe in the cloud the way we do, you have to think that this is the right direction for the company," he said.

Get an email alert each time I write an article for Real Money. Click the "+Follow" next to my byline to this article.
TAGS: Investing | Stocks | World | Software & Services | China