When was the last time you did something for the first time? Okay. I get it. That's a tough question in the year 2020. That reminds me, I saw a Praying Mantis the other day. Supposedly, these guys absolutely prey upon Murder Hornets. True story.

Easier question. When was the last time you considered taking an equity stake in Micron (MU) ? It has been a long time since I rock and rolled. I will tell you that much.

Some semiconductor stocks have been rocking. Advanced Micro Devices (AMD) , Nvidia (NVDA) , and Qualcomm (QCOM) immediately come to mind. The stocks of semiconductor firms more focused on memory than on processors, graphics or smartphones? Hmm... not so much. Pick a chart, any chart -- Micron, Western Digital (WDC) , even hard disk drive champ Seagate Technology (STX)  -- these stocks are struggling.

July 29 seems a good while ago already. That was the day Micron reported a fiscal third quarter in which both adjusted and GAAP EPS beat the street, as well as revenue that not only beat, but increased by 13.6% year over year. Not bad. Adjusted gross margin beat the experts, but landed toward the lower end of the firm's own guidance, while (not adjusted) gross margin contracted from 38.2% one year ago to 32.4%.

Looking within, DRAM revenue grew year over year. Shipments grew quarter over quarter. NAND revenue was up big on the year. Free cash flow landed at $101 million, despite operating cash flow that totaled just $2.02 million. The stock took off that day. Why? Simple. The cash position is still huge and the firm raised Q4 guidance for both sales and profitability.

The shares, however, have remained range bound, even trending toward the bottom of that range. Key competitor Western Digital beat earnings expectations last week, but missed on revenue. Even worse, WDC took current quarter guidance for sales down well below consensus. Earnings? Way, way below consensus. Then came Wednesday (last) night.

Highly respected (five star) analyst Sidney Ho of Deutsche Bank downgraded Micron from a "Buy" to a "Hold", while reducing his target price from $60 to $48. Ho says that after the dour outlook offered by Western Digital, he checked on quite a few metrics, and that there could be a "tough quarter ahead" for memory stocks. Ho says that "demand has dropped off sharply since mid-June." To be fair, just a few days ago, the equally respected Hans Mosesmann of Rosenblatt, who has a "buy" rating on the name, set a price target of $100 (way above the street) on these shares.

What Should We Do?

You know the answer in your heart. Two smart guys who watch the stock closely. Two opposing opinions. We are going to have to look at the charts and think for ourselves. I hear you. You were hoping for a different answer. It's okay. Lunch is in a few hours. I hear the PB&J is excellent today. 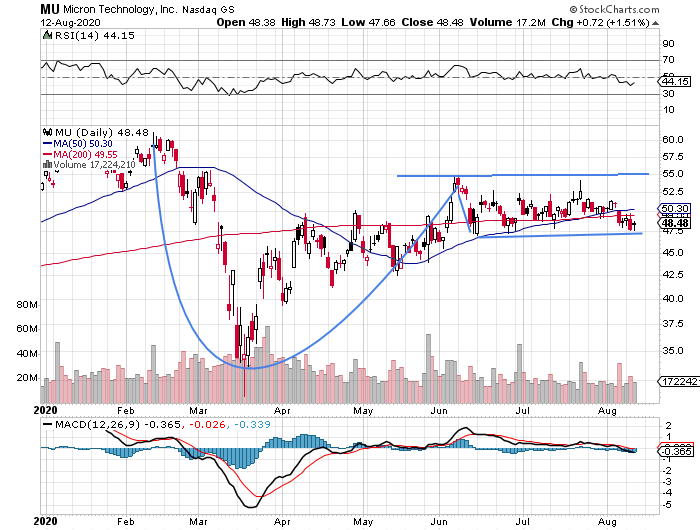 You see it as well as I do. We have the pandemic-induced cup with handle that is so pervasive this year across the entire galaxy of equities. The pivot created, by the way, was nearly an even $55. However, the pivot point evolved into resistance instead of providing a catapult-like breakout. This happens. Significant support has been developed down around $47.50 -- and a basing pattern was born.

Micron will test this support level Thursday morning. Should that support show itself, I would be willing to go out small (meaning a trade, and not an investment), and look to sell the position close to $55. Should this test fail, I wash my hands clean and look for another field to play in. Maybe put on an October 47.50/55 bull call spread if I can do it cheap enough. I don't need this trade, this is a matter of gauging the potential for opportunity.

(Advanced Micro Devices and Nvidia are holdings in Jim Cramer's Action Alerts PLUS member club. Want to be alerted before Jim Cramer buys or sells these stocks? Learn more now.)
Get an email alert each time I write an article for Real Money. Click the "+Follow" next to my byline to this article.
TAGS: Investing | Options | Put Call | Stocks | Technical Analysis | Trading | Semiconductors & Semiconductor Equipment | Technology | U.S. Equity