By BRUCE KAMICH Sep 19, 2019 | 04:43 PM EDT
Stocks quotes in this article: TTD
During Wednesday night's Lightning Round as part of the popular Mad Money program, Jim Cramer responded to a caller about The Trade Desk Inc. ( TTD) : "I think this is oversold. People have given up but I haven't given up," said Cramer.
Let's check out the charts and indicators before we make up our minds about TTD.
In the daily bar chart of TTD, below, we can see that the price of TTD has been correcting to the downside from early August. Prices are below the declining 50-day moving average line and getting close to the rising 200-day moving average line. The last test of the 200-day line was in late December.
The daily On-Balance-Volume (OBV) line peaked in early June and has been weakening since telling us that sellers of TTD have been more aggressive.
In the lower panel is the 12-day price momentum study, which shows lower lows in momentum which matches the price action. The past of the decline the past six weeks has not slowed.

In this weekly bar chart of TTD, below, we can see that prices have rallied significantly the past three years. TTD has pulled back to test the rising 40-week moving average line.

The weekly OBV line shows a decline from February and the Moving Average Convergence Divergence (MACD) oscillator has crossed to the downside for a take profits sell signal.

In this Point and Figure chart of TTD, below, we can see that prices have overshot the bearish price target of $217. Unless we get a trade at $220.28 we could see further weakness. 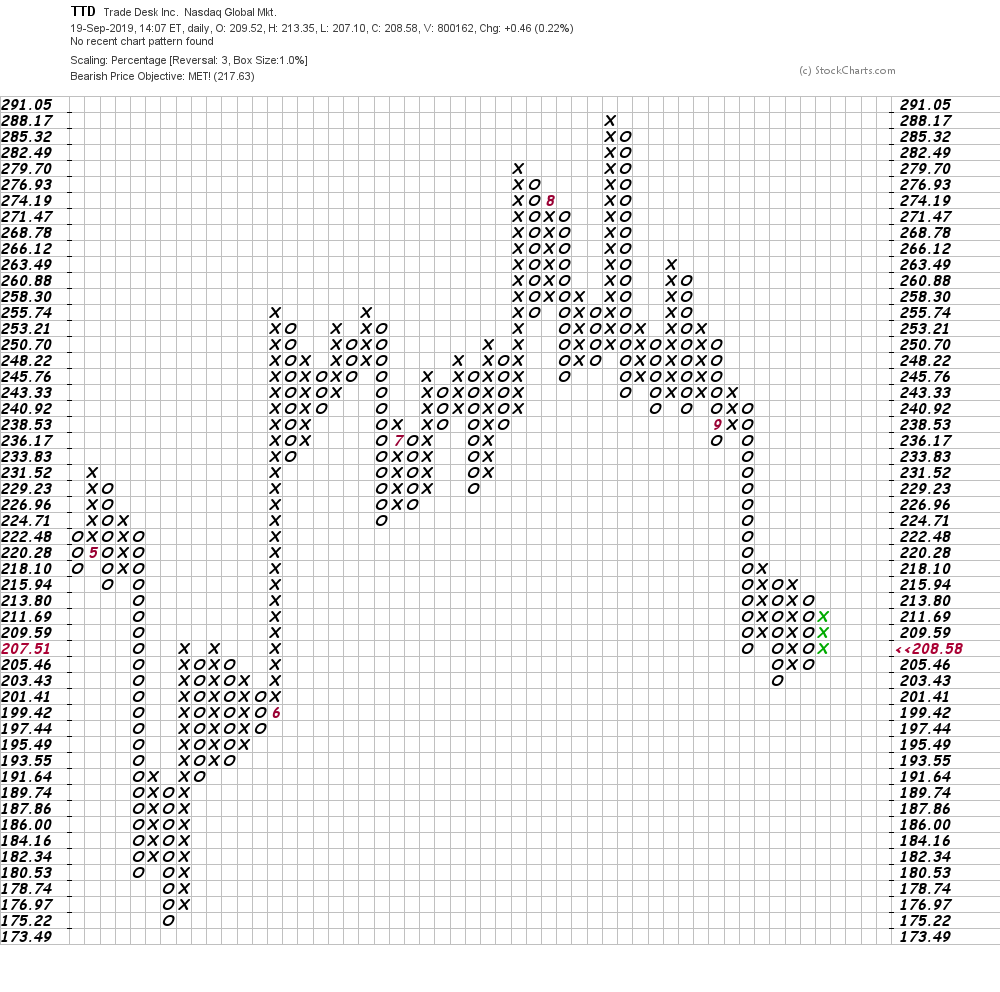 Bottom-line strategy: Prices can go down too fast and they can be considered oversold but that does not necessarily make them a buy, like TTD for example. Prices may test and hold the rising 200-day moving average line but our indicators are not (yet) indicating that will happen. Stand aside for now.

Get an email alert each time I write an article for Real Money. Click the "+Follow" next to my byline to this article.
TAGS: Investing | Stocks | Technical Analysis | Technology | Mad Money