By STEPHEN GUILFOYLE Jul 29, 2019 | 12:53 PM EDT
Pfizer ( PFE) and Mylan ( MYL) : Both firms reported second-quarter earnings first thing Monday morning. Pfizer beat expectations for earnings per share, while falling short on revenue. Mylan beat on both lines.
Pfizer's revenue is six times Mylan's. The results, at least for this day, are close to meaningless.
Those numbers are news today, but not  the news.
Upjohn. Remember that name? Been a while. Pfizer will divest its off-patent drug business, the old Upjohn, and combine that unit with generic drug maker Mylan in an all-stock -- and tax-free-- deal known as a reverse Morris (not the cat) trust.
The newly formed, still unnamed, U.S. domiciled company will run with an expected $19 billion to $20 billion in pro forma 2020 revenue. Adjusted earnings -- before interest, taxes, depreciation and amortization -- are expected for that year to range between $7.5 billion and $8 billion, that includes a projected $1 billion in total phased synergies annually to be realized from 2023 after complete integration.
Now, for the deal. each Mylan share will convert into one share of the new entity. leaving Pfizer with control of 57% of the new firm, and Mylan shareholders the balance. The new company will boast a line-up that includes Lipitor, Celebrex, Zoloft and Viagra from the Upjohn/Pfizer side, and the EpiPen from the Mylan side.

My thoughts? Probably a smart move for Mylan. Including this morning's beat, Mylan has missed expectations for revenue generations in 16 of the last 18 quarters, with seven in a row, prior to this morning, having printed in a state of year-over-year contraction. Even with this "Merger Monday" pop of 9%, these shares are roughly 73% lower over the past four years, and  down 26% year to date.
Leadership will come from the current teams of executives from both sides. Robert J. Coury stays on as Executive Chair. Upjohn head Michael Goettler will serve as CEO, and current MYL president Rajiv Malek will serve in the same role. Mylan CEO Heather Bresch is retiring.
The deal obviously reduces Pfizer in size, while perhaps keeping Mylan relevant for longer.
The Chart 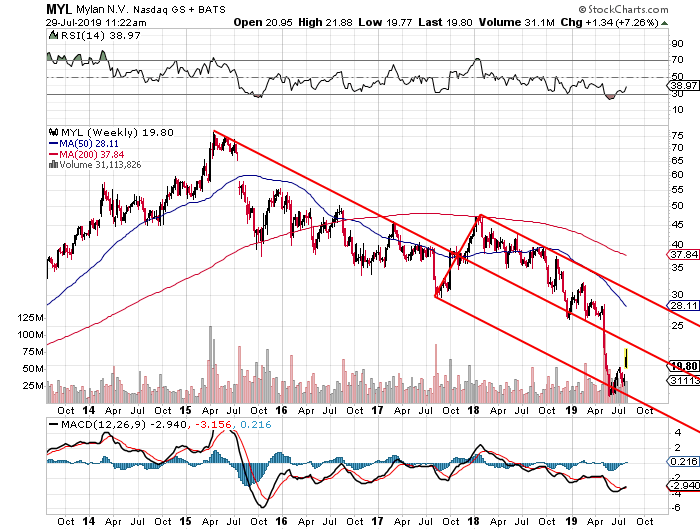 Am I going to get excited about the shares finding support at the lower bound, five-year downward sloping Pitchfork? No. I would not have bought MYL with your money. Even if I didn't like you. Does this deal change that? Well, it means there's a chance. I find the fact that so many Mylan executives will be involved moving forward a negative, but that the chief executive will come from Upjohn a positive.
While I do not see a reason for someone not already in the name to get involved, this would be a reason to add for someone managing a lousy position in my opinion.

Get an email alert each time I write an article for Real Money. Click the "+Follow" next to my byline to this article.
TAGS: Mergers and Acquisitions | Investing | Stocks | Biotechnology | Healthcare | Pharmaceuticals | Stock of the Day