Never mind that nobody, and I mean nobody spends 36+ years on active duty. Nobody. Fail to earn that first star in 28 or so, and they cash you in for a younger pup. Never mind, this is the movies.
Ever hear of John L. Burns? No, he was just a 69-year-old U.S. Army "War of 1812" veteran who showed up with his musket at Gettysburg... in early July 1863. Heck, there were 35 years in between my first and last day in uniform. Then again, I spent more years out of uniform than in.
Though highly unrealistic, do you know what a movie about a middle-aged naval fighter pilot is? Interesting. The movie, Top Gun: Maverick starring Tom Cruise who reprised his role from 1986's "Top Gun" drew $126M over the three-day weekend.
Remember the U.S. Navy recruiters setting up tables inside movie theaters in 1986? I do. I remember rolling my eyes, given that I was already serving elsewhere.
The sequel is poised to possibly threaten the $153M four-day Memorial Day weekend record of $156M. That record was or maybe still is held by the Pirates of The Caribbean: At World's End (2007) starring Johnny Depp. One record that this movie set for sure, is the opening day reception to the tune of $51.8M, which is a Paramount ( PARA) Pictures record (topping Iron Man 2). That may be a good thing because Paramount only has two features slated for theatrical release for the balance of the summer.
There's more.
Top Gun: Maverick added $124M in international gross sales, despite the fact that it's not being shown in either Russia nor China. Additionally, the movie did well, bringing in 22% of its overall gross from premium venues. IMAX Corp.  ( IMAX) is projected to have brought in $21M domestically and $32.5M globally.

1) Are the movies back? That could be a catalyst for AMC Entertainment ( AMC) and Cinemark ( CNK) , not to mention IMAX. Comcast's CMCSA Universal has seven feature films scheduled for the summer and then there is always Disney ( DIS) . I think "going to the movies" remains an uncertainty as long as Covid remains a risk. Certainly, more folks are feeling more comfortable sitting in a movie theater than at any point since the start of the pandemic.
2) Is it time to be in Paramount? Hmm. This name has befuddled me over and over again. From once being perceived as a content "arms dealer" to the CBS marriage and reorganization, to unfulfilled takeover speculation, I have been in and out of this name more often than I care to remember. I am currently in, and "this time," I am up 19% on the name. I have an ally this time, though. Unless one has been hibernating one is aware that Warren Buffett's Berkshire Hathaway ( BRK.A)   ( BRK.B) amassed a $2.6B stake in the name back in the first quarter.

Paramount Global ( PARA) posted its first-quarter performance almost a month ago now. The company put GAAP EPS of $0.60 to the tape, which easily beat Wall Street expectations. Revenue generation, however, totaled $7.328B, which was a slight miss as well as a contraction of 1.1% from the year-earlier comp.
The company added 6.3M subscribers to its Paramount+ streaming service (which is probably where I will catch Maverick), bringing the number of global subs up to 62M. Pluto TV, which is part of the family, expanded monthly active users to just under 68M. As a result, Direct to Consumer revenue popped 82% year over year to $1.089B. This growth mostly offset a 6% decrease in TV Media revenue to $5.645B, and a 27% decrease in Filmed Entertainment revenue to $624M. Now, that's some friendly low comp going forward, isn't it?
Turning to the fundamentals, Paramount had $5.3B in cash and equivalents on the balance sheet as of the end of the first quarter. Receivables were up, prepaid expenses were down... overall Current assets were down small to $15.4B. This measures up well against current liabilities of $9.7B for a current ratio of 1.59, which is very healthy. Total assets amounted to $58B, including $33.5B in "goodwill" and "other intangibles." Obviously we don't love that. Total liabilities less equity add up to $34.8B, including $16.7B in long-term debt.
While Paramount is in good shape "currently," we can not like that assets you can touch, count or feel add up to a rough $10B less than long-term liabilities. We also can not like that long-term debt is running at an approximate three times the company's cash balance. While Paramount does not necessarily fail my balance sheet test, this balance sheet is in serious need of some focus.

I don't really trust this stock. I do, however, recognize its place as a content champion.
You already know that I don't like the balance sheet, but that, in my opinion, is priced into the stock. PARA trades at just 12 times forward-looking earnings expectations, whereas DIS, another content king, trades at 26 times. I know the businesses are not an apples-to-apples comparison, but even Netflix ( NFLX) after all of its problems trades at 17.
Comcast, which is more of an apples-to-apples comparison, also trades at 12 times, but Comcast's balance sheet is in worse shape than Paramount's. Comcast runs with a current ratio of 0.86, which would fail my test.
I do think that Paramount is worthy of some exposure as an investment, given its decent fundamentals, its growth in the right places, and its user-friendly DTC offerings. 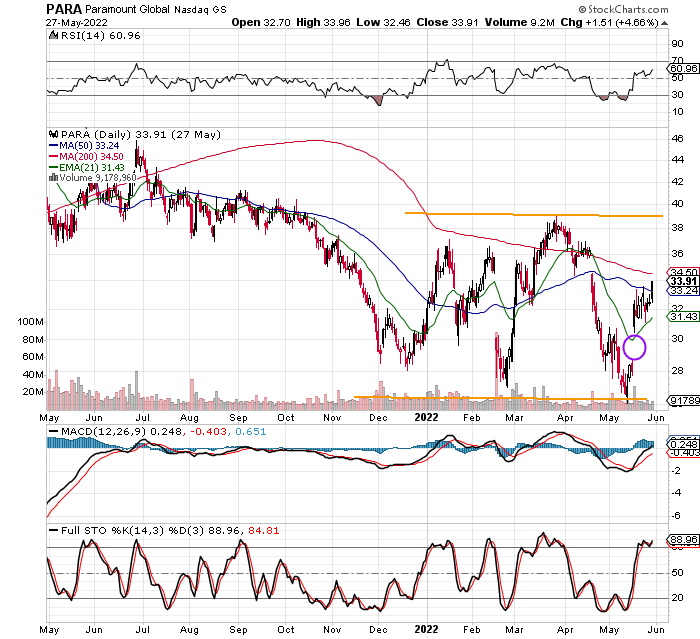 The stock has formed an ongoing flat base starting with the new year.
Has PARA broken out? No. The stock has, however, taken back its 21-day exponential moving average (EMA) ($3.43), as well as it's 50-day simple moving average (SMA) ($33.24). The next hurdle would be the 200-day SMA.
Both the daily Moving Average Convergence Divergence (MACD) and Relative Strength Index (RSI) are in good shape without being technically overbought, though I will admit that the Full Stochastics Oscillator is slightly out of step with those two indicators. I will also admit that PARA created an unfilled gap between $28 and $30 in mid-May, which I don't love.
Oh, did I mention that if you are long this one that Warren is on your side?
Price Target: $46
Pivot: $39 (March high)
Add: $28 (bottom of unfilled gap)
Panic: $26.50 (8% discount to my net basis of $28.92)
Get an email alert each time I write an article for Real Money. Click the "+Follow" next to my byline to this article.
TAGS: Fundamental Analysis | Investing | Stocks | Trading | Movies | U.S. Equity | Warren Buffett