The market got short-term overbought Friday. The S&P 500 is now about 10 points higher than it was at Friday's close. So far, I'd call that working off the short-term oversold condition. You can see on the chart of my Overbought/Oversold Oscillator that it has come down quite a bit. It's not enough to make it oversold, but at least the air is coming out and the upside momentum has slowed.

Also, note that my weekend Saturday Twitter Poll showed the largest tilt to the bulls since I started doing this weekly poll several months ago. Again, it is not scientific, but I have found when the poll is more even, say 50-50 or close to it, the market can tend to move higher, since there is very little conviction.

Saturday Poll
The next 100 points for the S&P

But when the conviction is so high, as it was last weekend with bulls over 60%, we tend to chop or go down. Too much conviction is never a good thing, for bulls or bears. In fact, I have a button that reads: "If you have all the answers, you don't understand the questions."

But if we want to talk about scientific polls, or at least one that has been around a long time -- since the 1960s -- and has been a good indicator over time, then we should talk about the Investors Intelligence bulls. The bears ticked down from 23.5% to 21.2%. I don't have a strong line in the sand for bears as I do with bulls, but I'll call 21.2% neutral.

The line in the sand for bulls is two-fold. Over 55% and I consider it a yellow flag; over 60% and it's a red flag. This week's reading was 56.6% which puts it in the yellow category. 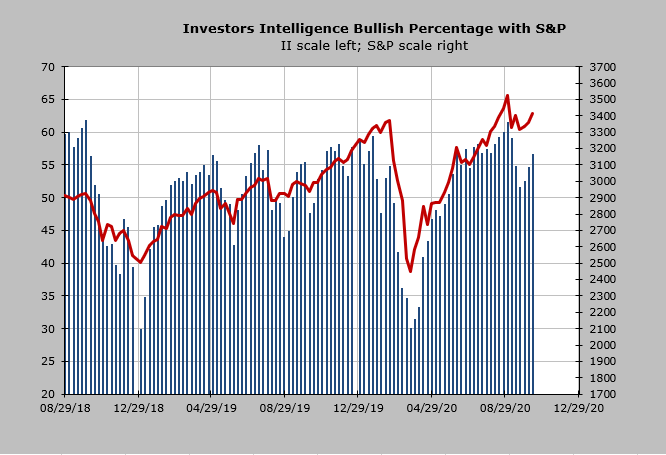 The other sentiment issue I have is this week's pullback hasn't seemed to bother many, as the equity put/call ratio was .39 on Tuesday. That means the 10-day moving average is now around .45. I know you will look at the chart and think but we rallied all summer. But the majority of stocks topped out in late July, as this indicator was lifting off that .43 reading. A little fear would be a good thing. I mean, where has all that talk about scary elections talk gone? Heck, I'd even settle for some chatter about the potential for a double-top in the indexes.

Away from that the breadth has been relatively mild for the last few days. Therefore there has been no change to any of the indicators.