Porridge. You know the tale. I might have first referred to "the three bears", but that would have sent a certain unintended market message. I could have started out through the mention of "Goldilocks", the lead character from that 19th century fairy tale. That itself might run with its own market implications. However, when one thinks about the porridge that the tale revolves around, I think we discover our equity market takeaway from Monday.

Investors witnessed what was really a continuance of trend that has now been in place for weeks. Leadership provided by Technology, Communications and Health Care put the Nasdaq Composite out in front of the other major large cap indices, and the Nasdaq 100 out in front of the Composite. This of course, occurred on trading volume that was indeed elevated from Friday (odd for a Monday?). Too Hot? Unsure. While losers at the Nasdaq Market Site did outnumber winners, advancing volume did beat declining volume by a decisive margin.

The Dow Jones Industrial Average? Too Cold. The index surrendered nearly half of one percent, as five "blue chips" experienced declines of 2% or greater, led lower by American Express (AXP) , and Boeing (BA) . Just right? I don't know if one would call it just right, but the S&P 500, the broadest of these indices, really closed within a smidge of unchanged, which might be a little deceiving. The breadth across the index certainly shaded to the negative, even if the headline read differently. At the New York Stock Exchange, losers beat winners by an almost a two-to-one count, while declining volume beat advancing volume by nearly three to one. Trading volume directly attributable to the index itself did rise slightly from Friday.

Truth be told, I think markets were working on a fairly negative session until there was a noticeable lift in pricing around late morning or midday. We were focused upon the steep rally that had picked up steam on Friday, as well as what appears to be deteriorating conditions between the U.S. and China. What turned markets for the better? Some are crediting New York Gov. Andrew Cuomo, who in his daily press conference sounded confident that certain (more rural) parts of the Empire State might move into the earliest stages of reopening local economies sooner rather than later. As New York and New Jersey have been the epicenter of the coronavirus outbreak in the U.S., traders took this well -- and I might add, took profits going into the closing bell... just as well.

The final score for the day's action really presents as a mini-version of the market picture that has been working for traders for several weeks now. As the Nasdaq Composite now stands +2.5% year to date, the S&P 500, even after this nice rebound, remains -9.3% for 2020. What some casual readers might have not have noticed would be that while the Technology Select Sector SPDR ETF (XLK) is now +4.6% for the year, the Health Care Select Sector SPDR ETF (XLV) is now knocking at that same door, at -0.2%. Using these sector SPDR ETFs as our tool for measurement, Communications (where internet-based stocks can be found) are -3% YTD.

Where is the "old economy" year to date, in terms of performance? Energy, even after rebounding nicely, stands -35%, the Financials -28%, Industrials -22%, and Materials -15%. Opportunity? Only, in my opinion, if one sees a "V-shaped" economic recovery. Otherwise, these are the industry groups that suffer most in a recessionary environment. And for the three leading groups? Far more inelastic demand, regardless of economic backdrop, especially while traversing a public health crisis for what the purveyors of software services, internet based commerce and the biotechs provide to a changed business to business, or even consumer driven marketplace.

I don't think it should be too hard to find risk on Tuesday. Yes, the Federal Reserve Bank will commence with its "Secondary Market Corporate Credit Facility", to be managed by BlackRock (BLK) , and certainly a historic step taken as far as pushing the bounds of domestic monetary policy is concerned.

The idea, for those who focus elsewhere, is to purchase ETFs that themselves invest primarily in investment-grade corporate debt. That said, there will be some high yielders, newer high yielders in particular, that should see benefit. This will be a market positive. This is not the "Primary Market Corporate Credit Facility," which has not yet launched and will purchase debt directly from the issuer. This is also not where the risk I speak of will come from on Tuesday.

Three of the administration's high-level Coronavirus Task Force doctors will testify on Capital Hill this morning either in person or virtually due to quarantine related conditions. Washington will hear from Dr. Anthony Fauci of the National Institute of Allergy and Infectious Diseases, Dr. Stephen Hahn of the FDA and Dr. Robert Redfield of the CDC, will field questions from the Senate Committee on Health, Education, Labor & Pensions. Those questions will focus upon the reopening of the U.S. economy and how progress might be made as safely as possible.

Just an aside, in case our legislators ever want my advice. Committee-level proceedings need to be not done on separate days in front of committees comprised solely of the membership of that particular legislative body, especially when the two bodies are led by opposing political parties. These committees, in times of crisis, need to be represented in equal measure, by both houses. What, perhaps, was George Washington's greatest attribute as a general? Or George Meade, for that matter? They were still in charge and the responsibility rested with them, but ahead of taking action, they would call a "council" of all of their officers in order to aggregate opinion. Even the junior officers were encouraged to speak up. When in a position of leadership, I have always tried to emulate that model.

The important questions today will likely focus upon testing for both the virus itself and for the antibodies created once an individual recovers. Roughly nine million tests have been conducted in this country across an unknown number of individuals. How much testing is necessary to make reopening safer? For schools to open in the fall? To feel secure at the workplace, or to travel to the workplace. In many places, just feeling awful is not a good enough reason to get tested. Obviously, that has to change. Ahead of this, the administration did announce $11 billion in additional funding meant to aid the states in the expansion of testing availability. How granular this sounds, and how difficult -- or perhaps discouraged these doctors appear in their response today -- is where the overt market risk lies.

The deteriorating geopolitical condition between the U.S. and China is not going to just go away, especially after headlines circled that the FBI and the Department of Homeland Security appeared set to warn that hackers possibly tied to the Chinese government have been working on pilfering information from U.S. sources working on vaccines and treatments in the fight against this coronavirus. Don't forget that direct Chinese investment in the U.S. dropped last year to the lowest levels in a decade, and that newly released data shows that this kind of investment landed at just around $200 million for Q1 2020. The quarterly average for 2019 had been around $2 billion, which was down from $2.7 billion in 2018, according to the Rhodium Group and the National Committee on United States-China Relations. (Which I read in the Financial Times.) The decoupling of economies that we sometimes mention here had apparently been underway prior to the spread of this virus, which would seem to the layman to have accelerated the process.

What? The Amazon (AMZN) news? You mean the talk about AMC Theaters (AMC) ? No, not that. The opinion put forth by Morgan Stanley's highly rated analyst Brian Nowak, who rates AMZN as a "buy" and has a price target of $2,600 on the shares, that's what. Nowak sees the $1 billion spend on an initiative between April and year's end to test Amazon employees on a daily basis in order to ensure a Covid-free (or free as possible) logistics chain for the prosecution of e-commerce.

Nowak, in short, sees the potential for perhaps an easier, quicker type test could return the business to more normalized functionality, and ultimately improved profitability going forward. Nowak expands on the idea, that should Amazon get where it needs to be on this issue, not only would that differentiate the firm from its competition, but could in the end be shared. Just a pipe dream? Maybe. Investors should read the piece, not my two paragraph and thus woefully inept synopsis. Reason to invest? Already there.

Such a dog. Not exactly. Datadog (DDOG)  -- which is a name that I have often liked, but have just as often swung and missed on (That reminds me, baseball may be back, but with universal use of minor league (designated hitter) rules.) -- went to the tape with Q1 results on Monday night. The firm surprised the Street with adjusted EPS profitability on revenue that grew 87.4% year over year, also a beat.

The provider of cloud-based monitoring of servers, databases, etc, through the use of analytic tools also guided both earnings and revenue higher for both the second quarter and the full year. In addition, clients worth $100,000 or more grew from just 508 a year ago to 960 as the reporting period closed. Take a look at the chart going into last night's numbers. 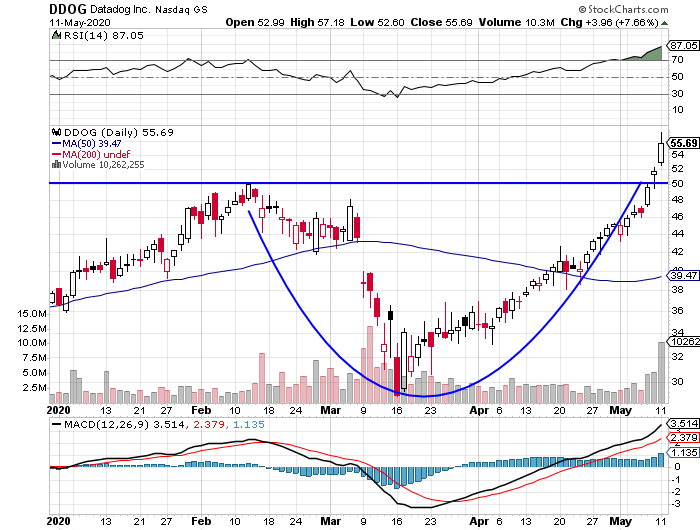 I know what you are gong to say. "No handle." No kidding. You all know how much I prefer to see a handle attached to my cups, which makes this name risky today. Sure, we have a serious breakout going in to earnings. The shares are trading even higher (around $58) overnight amid a "weakish" looking futures market.

Two facts. I hate to chase. Every pro does. I also covet this name. Good chance that at some point today, I will price out a strategy that allows me to get long $60 calls expiring Friday, and short either the $55 or $50 puts expiring at the same time, if I can get paid to do it. Would love to lay out specifics for you, but cannot until options markets open. That said, you know my intent. Oh, and short interest is not especially high for this name. You see them buying this name, it's really buyers, not a squeeze.

Get an email alert each time I write an article for Real Money. Click the "+Follow" next to my byline to this article.
TAGS: Earnings | Indexes | Investing | Markets | Politics | Put Call | Stocks | Trading | U.S. Equity | Coronavirus