By STEPHEN GUILFOYLE Feb 26, 2020 | 12:20 PM EST
Stocks quotes in this article: DIS, NFLX, AAPL, T, AMZN
The bell had rung its last. I still had financial television on in the office, preparing to work on a few positions in the after-hours markets.
"What was that?" Did I just hear that Bob Iger was leaving his post as chief executive at Disney ( DIS) ? Let me turn up the volume. Over the next few minutes, I would flat Disney, and then long Disney, or was that vice versa? I would think this would be bad for the stock. But, wait, they'll address the media. Of course they will. Why ride a roller coaster in the dark? Maybe I should just cool my jets until I hear them out. Yeah, that's it. That's the ticket. The E-ticket.
Note to the new guy, who's really a three-decade Disney veteran who has been running the parks: Nobody my age would mind if you brought back "Mr. Toad's Wild Ride."

Motley Crue? No, Bob Iger. The man who had replaced Michael Eisner in 2005 to become the firm's sixth chief executive stepped aside, but he's not gone. It appears that Iger is not even close to being gone. The man who oversaw the acquisitions of Pixar, Marvel Entertainment, LucasFilm, and the entertainment assets of 21st Century Fox throughout his tenure, while also building out the direct to consumer business that now includes Disney+, ESPN+, and majority control over Hulu will take on the role of executive chairman. The plan is that Iger will stay in that position for the duration of his current contract, which runs through the end of 2021.
Why now? Every investor was well aware of Bob Iger's intent to retire in 2018. Iger had been persuaded to stay at his post as the firm went into an era of great transition. So, again, why now? Iger was blunt. Basically, the strategies that the firm had planned to pursue had largely been deployed. Folks wanted to know, is it his health? Apparently not. The firm's finances, or the troubles presented by the coronavirus? No. Bob Iger wants to focus on the creative side of the business and leave the running of the entire firm to someone else.
That someone else is Bob Chapek, who has been with the firm for decades, and had run the theme parks since 2015. Chapek will still report to Iger. That has not changed, and quite obviously with almost two full years left on Iger's contract, this will be a long, and hopefully smooth transition.

Of course, Bob Chapek will face some immediate challenges. Some of those, as head of the theme parks segment, were already under his supervision. They challenges include the impacts of the coronavirus upon parks in Hong Kong and Shanghai that have been forced to close. Secondarily, there will likely some expectation of knock on effects upon parks still open for business as well as the cruise line as travel and tourism becomes a more difficult business.
Chapek just might be the right person for that job, He is after all, the one who led Disney's expansion into Asia, built up the "Star Wars" additions to the U.S. parks, and doubled the size of the cruise line.
As to the streaming business, or direct to consumer, Chapek admits that he has little experience in that field, but that he has been working directly with the consumer for his entire career. As Disney+ expands into new markets, and goes head to head with Netflix ( NFLX) , Apple ( AAPL) , AT&T ( T) , Amazon ( AMZN)  and others for the streaming dollar, the business will require increased investment, as will as better integrating the assets acquired from Fox. Chapek will still have Iger focusing on creativity. That will matter. As far as Disney+ is concerned, the firm has already told investors that this growing segment will not be profitable in isolation until the year 2024.
Speaking for investors, I would love to have Bob Iger run the day-to-day business forever. That's unrealistic. Iger is 69 years old, and does not want to do this job any longer. We pretty much already knew that. Wouldn't we rather have someone doing the job who wants the job? Many of you may recall, and I was a shareholder at the time, that we were unsure of Iger when he replaced Eisner. Iger turned out to be great. I am prepared to accept that Bob Chapek was probably not chosen by accident. 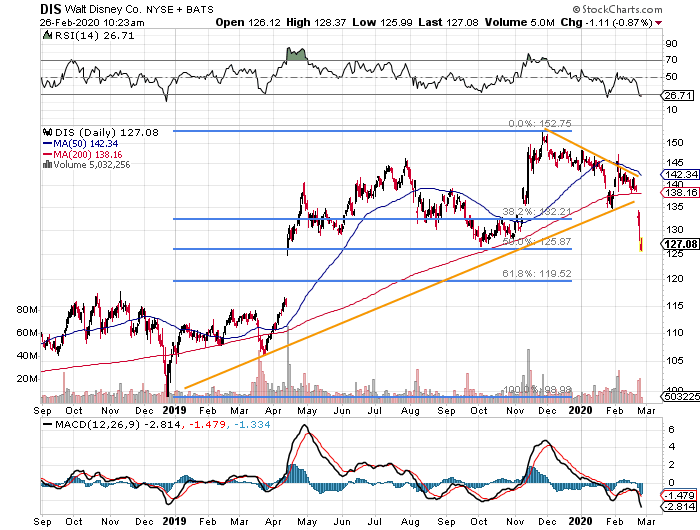 The shares did in fact experience the explosive volatility suggested by the closing trend lines that converged at the 200-day simple moving average just a few days ago. I did tip my toe into the name during the regular session on Tuesday, and then traded the name after the bell. My goal was to land with a net basis of $125.87, which is a 50% retracement of the entire 2019 move higher. My actual net basis right now is $126.15.
My current plan is to add down to the that spot, or maybe slightly lower to get my average there. Currently, but this is subject to change as news regarding the COVID-19 case evolves, my target price is $138, and my panic point is $118 -- a break of the 61.8% retracement level. Again, this position is fluid, as are my Apple ( AAPL) and Amazon longs, as these three names have been the core of my day-trading operations this week.
(AMZN, AAPL, DIS are holdings in Jim Cramer's Action Alerts PLUS member club. Want to be alerted before Jim Cramer buys or sells them? Learn more now.)
Get an email alert each time I write an article for Real Money. Click the "+Follow" next to my byline to this article.
TAGS: Entertainment | Investing | Stocks | Stock of the Day