I really do think the complacency we see is seasonally related. For example, if it wasn't closing in on yearend, and was instead April, I think we would have seen bullishness ride swiftly into the sunset, and we'd see bears coming out of the cave. But that's not what we have. We still have a high level of complacency.

I realize sentiment shifts take time. They do not happen overnight. More often folks go from one camp to the other with a stop on the fence. But we have barely seen the intermediate term sentiment gauges budge.

Last week's Investors Intelligence bulls stayed steady at 56% for the third straight week. Sure this reflects the prior week's trading but the Russell 2000 was already down 5% coming into the week and these folks didn't flinch. I do expect we'll see a change this coming week, but do you think it will get to 40% like it was in October? I don't.

The National Association of Active Investment Managers, who back in early October were at 55 on their Exposure are still sitting just over 100 for the third straight week. This survey is taken Wednesday morning, so while it does not include Friday, I still think it shows no fear. 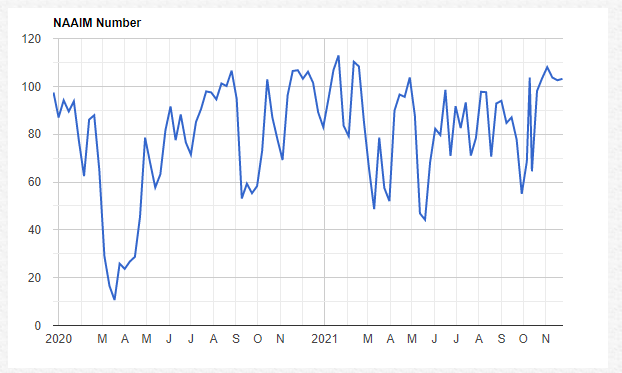 The American Association of Individual Investors folks have done some shifting. The bears are now the highest since the early October time frame. But for now they stand alone.

The put/call ratio was 0.92 on Friday. That's getting high but on a relative basis, take a look at how many times it tagged over 1.0 in September and October. So we'll call this shifting, but are folks bearish? Not that I can see.

Yet we find ourselves oversold. Well, the small caps are oversold. If I use the Russell Momentum Indicator and walk the Russell 2000 down another 100 points this week, you can see the indicator turns upward. That is the definition of oversold: when price goes lower but the momentum does not. 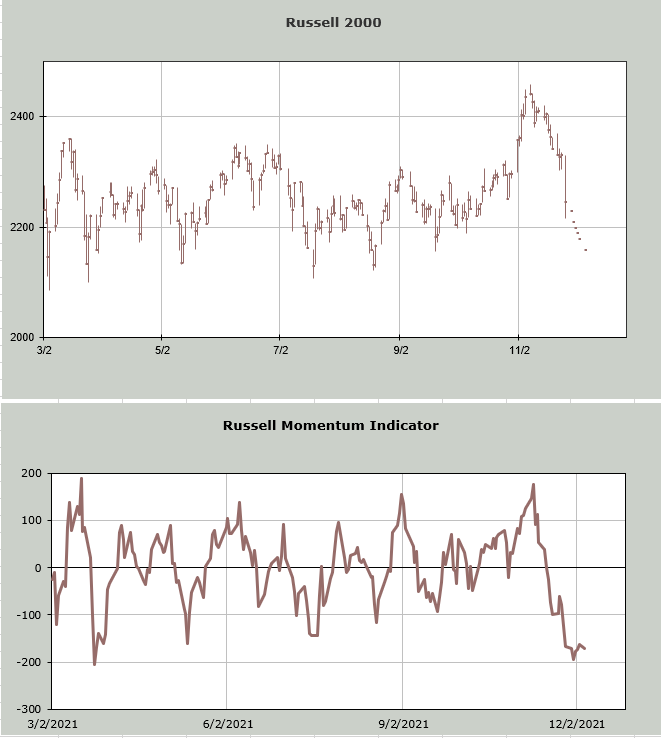 If we use the 'what if' for the McClellan Summation Index, where we look to see what it will take to halt the decline in the Summation Index, we find that it needs a net differential of plus-4,000 advancers minus decliners on the New York Stock exchange. You can see in the past that has marked an oversold condition.

If we use my own Overbought/Oversold Oscillator, we can see it on the chart. But you know, I like to look at the math behind it. I use the 10-day moving average of the net of the advance decline line here. So, we look back 10 trading days to see what numbers we are dropping. A long string of red numbers to be dropped means we are oversold. With that in mind, take a look at how much red this indicator is dropping starting Tuesday. 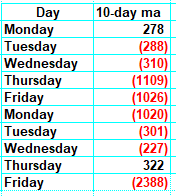 The NYSE saw 90% of the volume on the downside on Friday, which is often the sign that sellers got a little panicked and we are due for a bounce. It was a half day of trading but the PowerShares QQQ Trust (QQQ: Nasdaq)  traded 51 million shares, when average volume for this ETF is 40 million. Imagine if we'd had a full day of trading.

The number of stocks making new lows for the NYSE continues to expand (that's bearish as I've explained) but for Nasdaq, where the expansion began much earlier, we saw some contraction last week with Friday's reading approximately 200 fewer than Monday's reading. That is a short term positive divergence.

I expect an oversold bounce in the market this week, especially if Monday opens down or even if it stays down all day. I think the fact that we still have complacency in the market limits the upside but this week we should be oversold enough to bounce.