For quite some time, The Trade Desk, Inc. (TTD) was my alternative choice to Alphabet Inc. (GOOGL) .

The stock traded in the low $50 area at the time. With TTD trading above $220 today, it might be time to turn programmatic advertising attention back to Alphabet. Add in all the love Disney (DIS) is seeing from streaming, and you have to wonder when YouTube will get some attention. It's rarely brought up in conversation among analysts, yet many of those I know who have cut the cable have YouTube TV as a new staple.

You can check out the price action below. 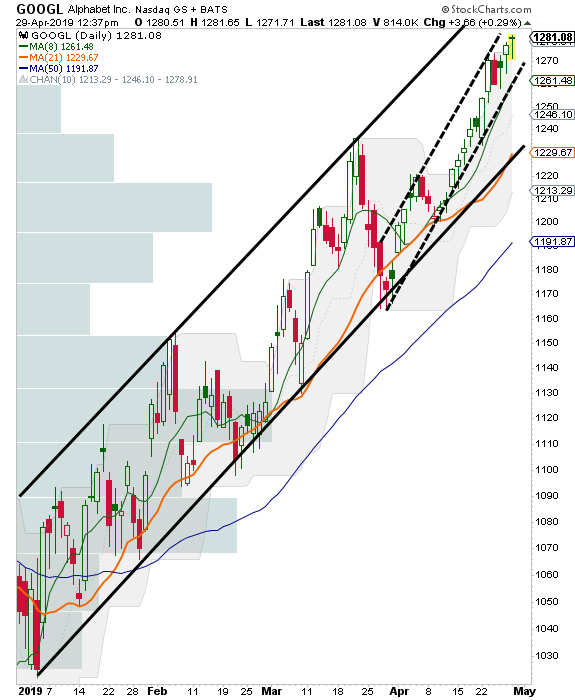 The move over the last month has accelerated its speed. If $1,270 is broken, then I have my eye on $1,230 for support. The upside is a head-scratcher since there is no clear resistance. That makes shorting the stock, even on a post-earnings pop, very difficult because you get into a Disney scenario where you have no idea what the stop should be.

Heading into earnings, the option's market isn't pricing much of a move in Alphabet's stock price. The current move for the week sits around 3.4%. That's measuring from Monday's close until Friday's close.

That may not feel like much, but over the past 2+ years, the 3-4% range has been a common result. That being said, there may be an opportunity for active traders. The stock has experienced an intraday maximum move of 5%+ six of the last nine reports. That means if you are willing to watch the stock intraday after going long a May 3 straddle at the strike closest to the closing price today, you may be able to flip that tomorrow.

That ain't half bad, but remember, if the stock barely moves, we could see those same straddles drop to $15. In other words, the likelihood of a triple-digit percentage winner isn't all that high. In fact, I'd say the upside is roughly equal to the downside, but for active traders the odds of the upside slightly outweigh the downside. In other words, I like the idea of the long straddle into earnings.

Stretching the trade until May 17 will result in a cost closer to $58, but the downside should be less than the May 3 straddles. Given the cost is $13 higher, I don't believe it creates any advantage, especially once you scan the stock's history and see the three-week post-earnings moves fall in the 3-6% range.

If I'm trading this one, I'm rolling the dice on the May 3 $1,285 straddles (or the closest strike within the last 30 minutes of trading).

Get an email alert each time I write an article for Real Money. Click the "+Follow" next to my byline to this article.
TAGS: Fundamental Analysis | Investing | Stocks | Technology | Television Production/Distribution | Advertising | Stock of the Day