During the Lightning Round segment of Mad Money Wednesday night one caller asked Jim Cramer about Halliburton Co. (HAL) . "Halliburton is up big. I recommend taking out your costs and letting the rest run," was Cramer's advice.

Let's check out the charts of HAL Thursday morning.

In the daily bar chart of HAL, below, we can see that prices collapsed rapidly in February and March before reaching a single-digit low in late March. Trading volume was very heavy in March and April perhaps telling us that weak hands were sellers and other, stronger hands were buyers.

HAL rallied to early May and then traded sideways till early November when another uptrend took hold. Prices are now up more than four-fold from their lows.

While HAL is trading above the rising 50-day and 200-day moving average lines we can see that the On-Balance-Volume (OBV) line has been weak since September indicating that sellers of HAL have been more aggressive.

The 12-day price momentum study shows lower highs from November into the new year and this is a bearish divergence when compared to prices making higher highs. The pace of the advance is slowing and that is often a "heads up" that someone may be a scale-up seller.

In the weekly bar chart of HAL, below, we can see that prices have turned sideways after a multi-year downtrend. HAL has rallied into a prior support area in the $26-$18 zone. This zone was support on the way down and is likely to "reverse roles" and act as resistance on the rally. Prices are above the now rising 40-week moving average line.
The weekly OBV line is positive and the MACD oscillator is bullish but shows some narrowing.

In this daily Point and Figure chart of HAL, below, we can see a potential upside price target of $25 -- not quite a breakout over the resistance zone from $18 to $26 on the weekly bar chart above. 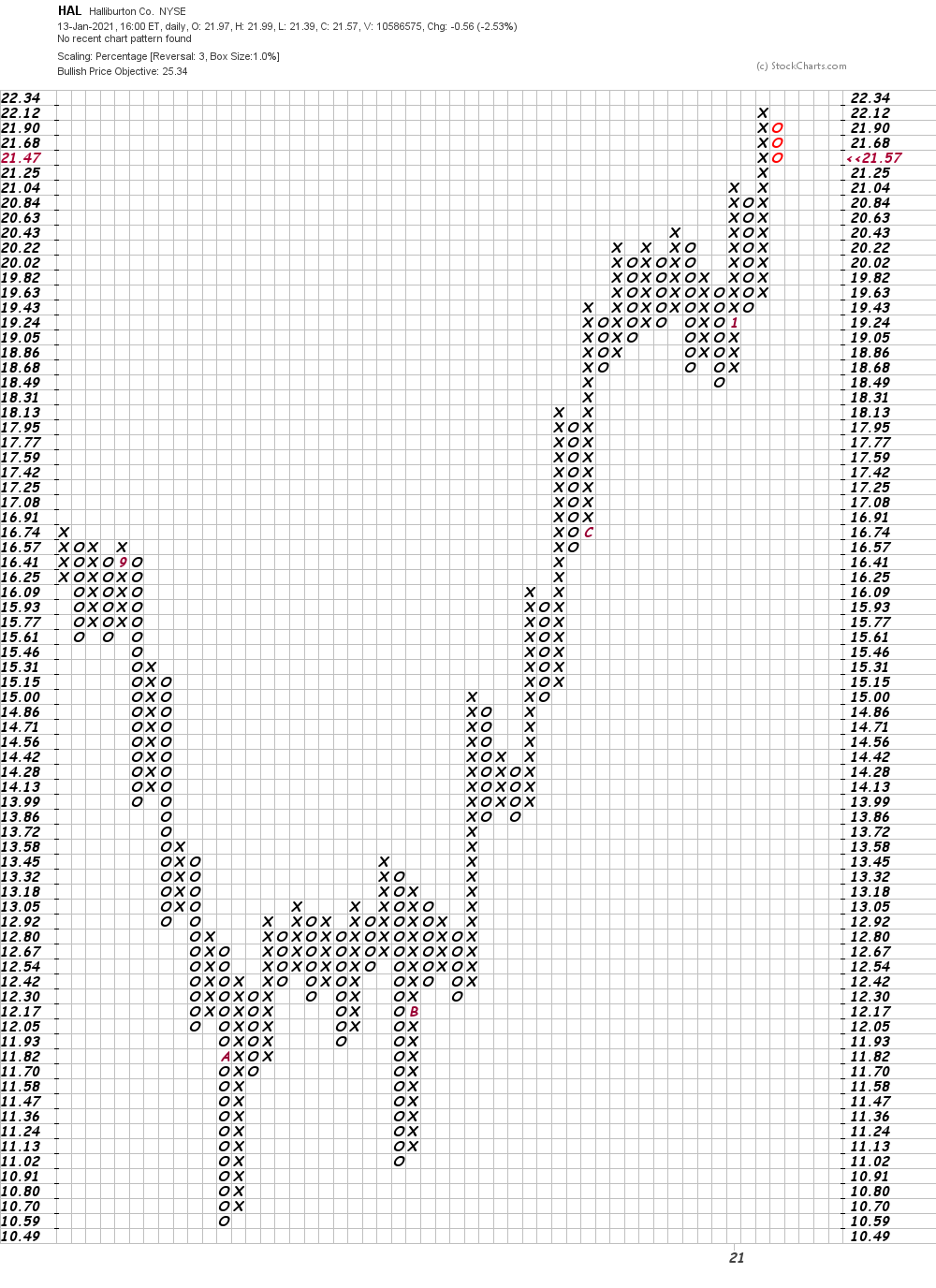 In this weekly Point and Figure chart of HAL, below, we can see a longer-term price target of $38.

Bottom-line strategy: HAL has recovered to retest overhead resistance. Prices have pushed roughly halfway into the resistance zone and this is a typical place where prices could be rejected and a place to nail down profits. We can repurchase HAL later in the first quarter.
Get an email alert each time I write an article for Real Money. Click the "+Follow" next to my byline to this article.
TAGS: Investing | Stocks | Technical Analysis | Energy | Oil Equipment/Services | Mad Money |