We saw some interesting tidbits in Wednesday's trading. I would not call any of it significant, but certainly worth noting and discussing.

Yesterday we discussed the McClellan Summation Index, which peaked in December and has been slowly leaking for the last two months. Remember this tells us what the majority of stocks are doing. With the positive breadth on Wednesday this indicator stopped going down. It has not really turned upward yet but it stopped going down and that is a change.

There is still no marked increase in the number of stocks making new highs, so I would say it is a high probability that a higher high in any of the indexes (since we're so close) will come with fewer new highs and therefore a negative divergence.

But then there is sentiment. Last week we saw a change in the American Association of Individual Investors' weekly survey with bulls falling and bears rising. The National Association of Active Investment Managers (NAAIM) saw their exposure fall quite a bit, as well. Now we have the Investors Intelligence bulls at 57.8%, which is the lowest reading since the election. Bears are steady, with the bulls jumping into the "correction" camp.

I grant you 57.8% is not extreme in any fashion, but it is a shift in sentiment. 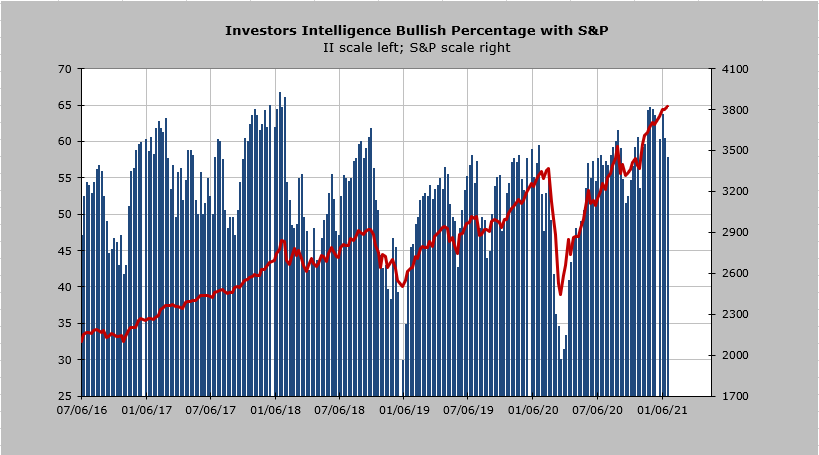 Finally there are the bonds. The yield on the 10-year is back to where it was a few weeks ago (when bonds got oversold). The Daily Sentiment Index (DSI) for the bonds is around 45 now. An extreme reading for bonds comes in the 20s. I don't think I have ever seen it get to single digits, so a move to a higher high (in yields) has to be watched.

Speaking of the DSI, with Nasdaq giving up the gains on Wednesday, it managed to keep the DSI from going over 90 and it retreated back to 83. Now we will watch the DSI for the Volatility Index, which chimed in at 18. Remember, a low reading in the VIX is bullish the VIX, and not good for stocks.

For now, I have said a pullback in stocks would lead to another oversold reading, and I still think that. That will change later next week when we lose that "oversold window. "There are a lot of moving parts now with bonds, the dollar and some of those DSI readings. I wonder if they all "come together" as we get back to overbought later next week.