By STEPHEN GUILFOYLE Jul 16, 2021 | 12:05 PM EDT
Stocks quotes in this article: CRM, WORK, ZM, MSFT, PFDR, GE
The Twitter page of Salesforce ( CRM)  CEO Marc Benioff says that he is intentionally off-line until Aug. 1. Salesforce is not expected to report the firm's second quarter financial performance until around Aug. 25, so that's not reason for Beioff's timed return to social media. Some readers who have good memories, or are at least quick with an internet search, might point out that on May 27, when Salesforce reported its first quarter, the firm's CFO, Amy Weaver, said on the call that investors could expect the firm's acquisition of Slack ( WORK)  to close "near the very end" of the second quarter. The firm's second quarter ends on July 31.
So, as a Salesforce investor who has always felt that this CEO indeed had a special knack for leadership even if we might not agree on everything, I want to know if I should stay the course, or cut bait and take profits ahead of the deal.
I look back to Benioff's interview at Yahoo Finance in mid-June. Read what Benioff had to say "We're going to rebuild all of our technology, once again, to become Slack-first to help our customers have a harness to work in this new world -- where you're working at home; you're working in the office; you're working at events; you're working anywhere. Well, if you're going to be successful from anywhere, you're going to need an incredible platform like Slack."
Just Sarge thinking here. I think as L.A. County out in California reinstates its mask restriction, as the state of Missouri pays a serious price for such a low vaccination rate, and as Major League Baseball once again suffers disruption at the hands of this virus that just maybe it won't be as easy as blowing a whistle and returning everyone to their old 9-5. Monday thru Friday office life. It has become clear that even those vaccinated can become infected by the delta variant, and even if these folks have more protection against serious illness, they still catch and transmit the virus. As long as the virus infects, the virus mutates. Understand? There will be a permanency in demand for what Zoom Video ( ZM) , Microsoft Teams ( MSFT) ), and Slack provide for business.

Earlier this week, Salesforce announced "Advertising Sales Management for Media Cloud, an industry-specific application for managing cross-channel advertising sales. This software allows publishers to maximize advertising revenue generation through bringing together media planning and analyzing campaign performance from multiple first and third party sources.
On Thursday, the Pathfinder Acquisition ( PFDR) , which is a special purpose acquisition company, agreed to take ServiceMax, a software as a service management provider, public in a deal valuing the company at $1.4 billion. The new firm will trade under the symbol SMAX at the Nasdaq market site. Why do Salesforce investors care? Existing ServiceMax investors include General Electric  ( GE)  and Salesforce. Both are expected to retain their entire equity stakes.
Also on Thursday, according to a report at CTFN, Slack had canceled pricing and reference data subscription service for user log-ins, as the service will use Salesforce credentials going forward. CTFN, in addition, reported that as the Department of Justice has been working on this deal, there has been no additional resources added to the review. While one never says that anything is a slam-dunk, it would appear that none of the things one might look for that could slow down a transaction are there for this deal.

While earnings may still be six weeks out, this will likely be that last quarter reported without any impact (positive or negative) from Slack upon the numbers. Wall Sreet is looking for earnings per share of $0.92 on revenue of $6.24 billion. The entire range of expectations for the 29 analysts following the name spans just ten cents from $0.85 to $0.95. This would be a contraction from the $1.44 reported one year ago. That has been expected. The sales growth projection is accurate, would amount to annual growth of 28%, which would be a second consecutive month of acceleration.
In my view, Salesforce has made itself unique to businesses needing to better manage their own customer relationships. Benioff has been very clever at buying growth when that might be the quicker route to where the firm wants to go. More recently, the Mulesoft and Tableau acquisitions come to mind, and have greatly expanded both what Salesforce can provide as well as total addressable markets for accessing corporate data, but if we went out in the weeds we could probably come up with almost 10 acquisitions that all worked after a period of digestion.
Expect the same here? Maybe. That said, also expect the firm to produce $50 billion in sales come fiscal year 2026. At least that's what we were told at Investor Day 2021 back in December. In recent days, Kirk Materne of Evercore ISI, who is rated at five stars by TipRanks, reiterated his "buy" rating on CRM and set a $300 price target. Yesterday, Stifel's Parker Lane (3 stars) assumed coverage of Salesforce with a "buy" rating and a $295 price target.

Force of the Chart

There's more than one thing going on here on this year-long chart. While one can say that the stock has been basing for 11 months, one can also point to the uptrend (illustrated in orange) present within that began once the gaps of both last August and last November had been filled. 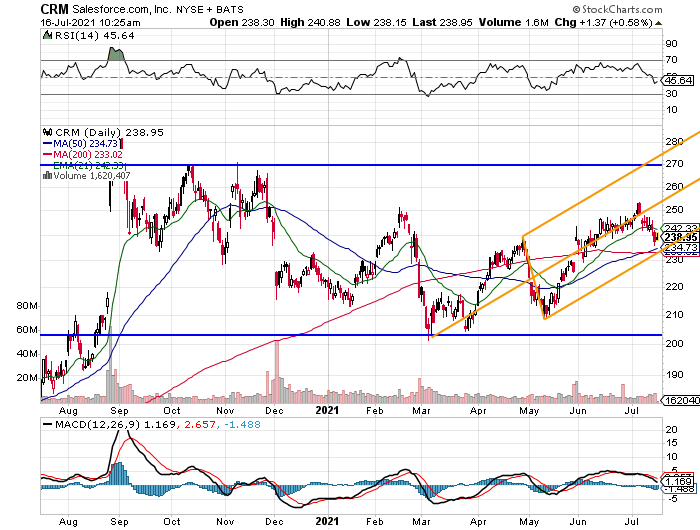 I would normally like to place a pivot at the top of a basing pattern, but the company is about to swallow another, I don't think that would be realistic. We can always adjust later if needed. The stock is certainly not in danger of being technically overbought anytime soon.

(CRM and MSFT are holdings in Jim Cramer's Action Alerts PLUS member club. Want to be alerted before Jim Cramer buys or sells these stocks? Learn more now.)

Get an email alert each time I write an article for Real Money. Click the "+Follow" next to my byline to this article.
TAGS: Investing | Stocks | Technology