When I first heard that Elon Musk had determined the identity of his successor, I breathed a sigh of relief. I figured Musk was finally ending his obsession with Twitter (TWTR) , and getting back to the business of running Tesla (TSLA) .

Unfortunately, that's not the case. Musk's successor will run Tesla, not Twitter. Elon is sleeping at Twitter headquarters, and says he'll continue to do so until that company "is in a strong place." He added, "People have no idea how fast Twitter will evolve."

The news about Musk's replacement has helped pushed Tesla back to our recent entry point of $182. That's where the trade originated, and that's where it'll end. I'm happy to exit Tesla here with a breakeven result.

There are three reasons why I'm selling Tesla now. First, Musk embodies Tesla. It's difficult to imagine Tesla without Musk at the helm, and impossible to imagine anyone better suited to run the company. That uncertainty is weighing on shares, as the stock has fallen by over 20% this month. 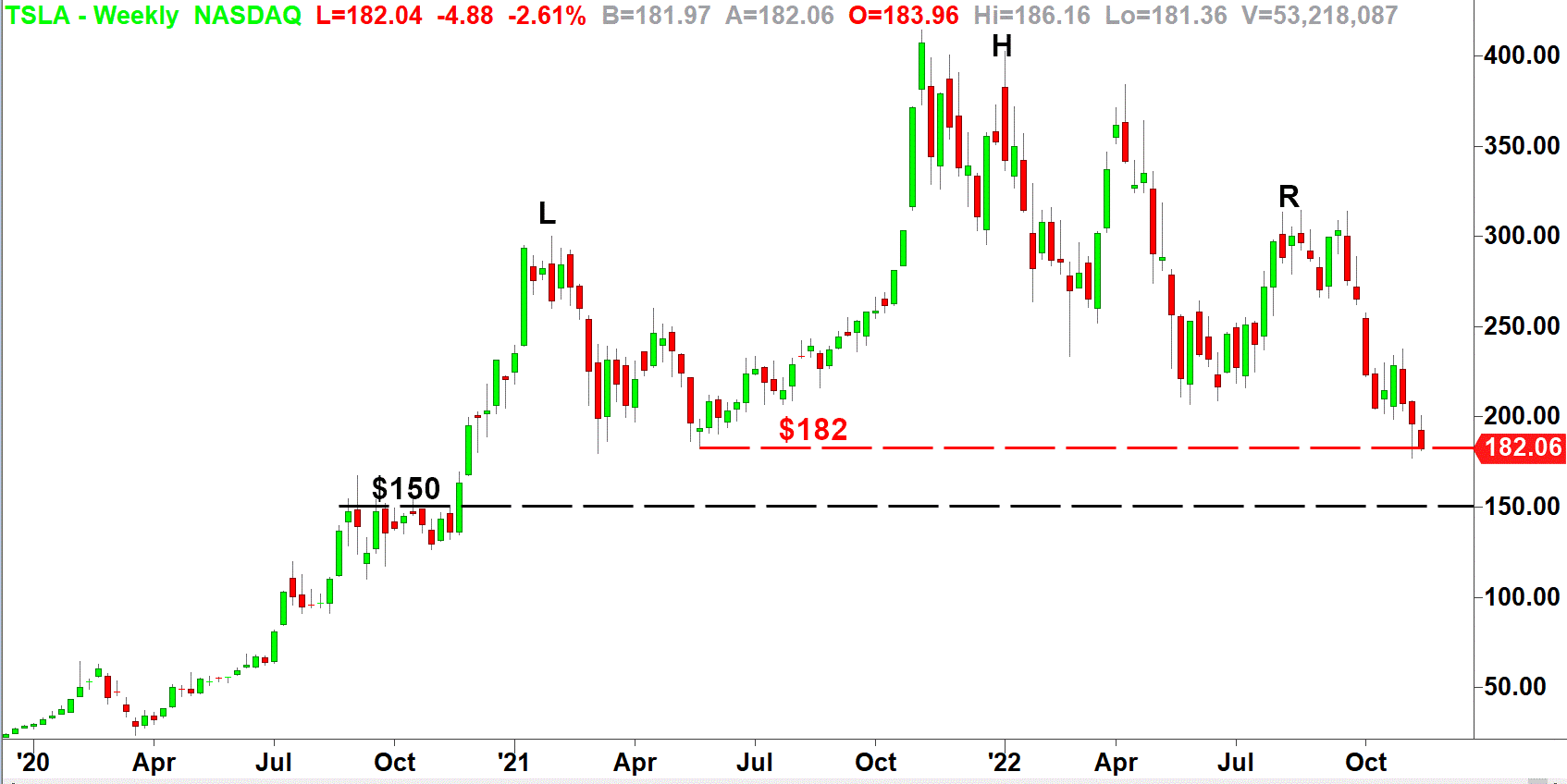 The second reason is Tesla's weekly chart, which has formed a rather large head-and- shoulders pattern (L-H-R). The massive bearish formation is nearly two years in the making.

The $182 support level (red line) is still the key. If that line breaks, the stock could easily fall to $150 (black line), a former resistance level from two years ago. I'll reconsider owning the stock at that level.

The third reason for selling Tesla concerns the economy in general. Amazon's (AMZN)  executive chairman Jeff Bezos recently warned about an impending recession, as the company he founded prepares to lay off thousands.

The layoffs aren't limited to the tech sector. Trucking giant C.H. Robinson (CHRW)  just laid off 650 workers, or 3.6% of its workforce, due to worsening economic conditions. The fact that those layoffs occurred at the start of the holiday shopping season sends a negative signal about the economy.

I have no doubt that Musk will succeed with Twitter. For example, he recently discussed adding debit cards, checks, and digital money transfers.

Decades ago, Musk's X.com, which provided similar services, eventually merged with another company, Confinity. Together, X.com and Confinity became the genesis of PayPal (PYPL) .

How many jobs will be lost in a recession? Bank of America estimates that 175,000 jobs will be lost per month during the first quarter of next year. Before the end of 2023, over a million Americans could lose their jobs as the unemployment rate rises to the Fed's projection of 4.4%.

Those job losses equate to fewer major consumer purchases, including autos. That's bad news for all auto manufacturers, and Tesla is no exception.

Get an email alert each time I write an article for Real Money. Click the "+Follow" next to my byline to this article.
TAGS: Investing | Jobs | Stocks | Automotive | Electric Vehicles

If You're in Neurocrine Biosciences Consider Getting Out: Here's Why