Let's begin with a chart of the S&P. Just over a week ago I drew in a head and shoulders bottom (not shown on the chart below). The measured target would be in the 4,550 area. The S&P closed at 4,549 on Thursday.

If that wasn't enough, do you recall that uptrend line that was broken that everyone fussed over (along with the 50-day moving average)? The S&P has now returned to the scene of the crime. And of course this is the old high area. So there is a lot going on up here in this mid 4,500 area.

Then there is the chart of XLE, an ETF to be long energy stocks. That head and shoulders bottom measures to the $55-$57 area. As a reminder the Daily Sentiment Index (DSI) for oil got to 93 just over a week ago. It may have another rally but I think this is the area it stalls out.

My beloved Transports have had a terrific run and that base does measure to 16,000 but with the hootin' and hollerin' over the trains and truckers on Thursday even I had to say, maybe it's time for this group to have a rest.

Then there is the yield on the Five Year Note. This is just a reminder that it closed at 1.21% on Thursday and that puts it right into the target zone of 1.20-1.25% now.

So you can see there are targets being hit and resistance reached. Breadth was poor on Thursday but again, not enough to roll over any of the indicators. Rather it was sentiment that was eye-popping.

The American Association of Individual Investors (AAII) saw bulls rise 9 points to 47% and bears fall four to 28%. That's quite a shift. 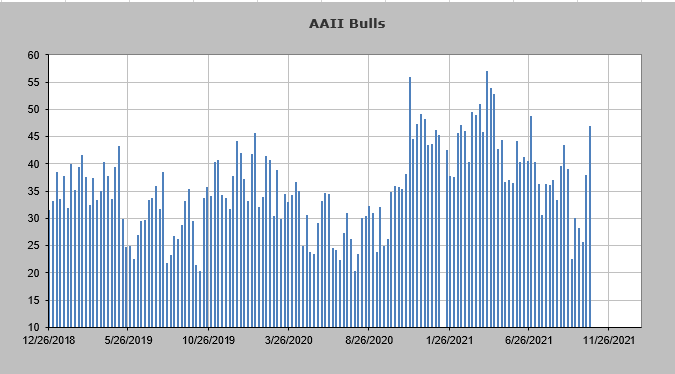 Then there is the National Association of Active Investment Managers (NAAIM) who a few short weeks ago lowered their exposure to 55. This week they brought it back up to 98. The upper 90s is getting pretty extreme. 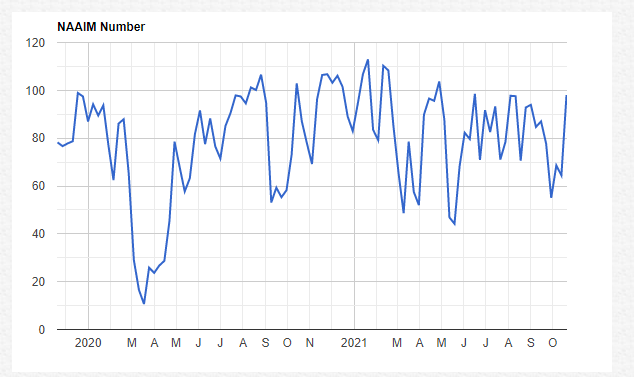 The equity put/call ratio has been under 0.50 for eight straight days so I expect sometime next week the 10-day moving average could turn up from a low(er) reading.

Finally there is the Daily Sentiment Index (DSI) with a reading on the S&P at 85. Nasdaq is at 84. And the VIX is at 13. These are getting quite close to extreme since readings over 90 or under 10 are red flags for me.

As long as the breadth indicators are still rising it is difficult to be bearish, but at some point we need to back off and after seven straight up days and 200 points for the S&P now would be a good time for a breather.