Tuesday morning, after the stock spiked in late March and then suffered five consecutive "down" days, Tilray Brands (TLRY) released the firm's fiscal third quarter financial results. Tilray posted GAAP EPS of $0.09 on revenue of $151.87M. The bottom line number crushed expectations for a net loss, while the top line result fell short of expectations despite year over year growth of 22.6%. A year ago, Tilray posted a GAAP EPS loss of $1.03 per share. Gross margin increased from 25% a year ago to 26% as gross profit itself increased 31% to $40M.

Why The Recent Volatility?

Last week the House of Representatives passed the Marijuana Opportunity Reinvestment and Expungement (MORE) Act in a 220-204 vote. Provisions inside the bill include decriminalizing marijuana at the federal level by removing it from the list of controlled substances and removing any criminal penalties for those who make, distribute, or possess marijuana. This bill, if passed into law, would impose a federal tax on marijuana sales with proceeds funding programs for substance abuse treatment and legal counseling to aid communities negatively impacted by the war on drugs.

There is, however, no sure path to passage in the US Senate, as there were only three Republicans among the 220 "yea" votes in the House, and half of the Senate is Republican. Additionally, New York Senator Chuck Schumer, a Democrat, may not be a supporter of this bill, as he has some ideas of his own regarding federal legalization.

Wellness provided sales of $14.697M, with no year ago comparison.

- Cost synergies from the Aphria acquisition came to $76M achieved on a run-rate basis to date. The firm expects to reach its $80M synergy target by the end of May, which will be five months early. The firm also expects to generate an additional $20M in synergies in fiscal 2023.

- Tilray has captured a rough 20% share of the German medical cannabis market. Germany is Europe's largest market for medical-use cannabis, and is expected to be a large market for recreational use once legalized.

- Tilray's Manitoba Harvest unit has launched its Hemp+ Macha and Hemp+ Supergreens powders exclusively at over 300 Whole Foods Markets (AMZN) locations across North America. The products are expected to land on shelves this month throughout the US and Canada.

As of February 28th, Tilray had a net cash position of $279.2M, down significantly over nine months' time, but up from a year ago. Accounts receivable and inventories have grown but only small. This leaves current assets at $695,8M. Total liabilities amount to $282.4M, which is also down significantly from nine months ago. Tilray stands with a current ratio of 2.46, which is comforting.

Total assets add up to $5.819B. However, nearly half of that comes from the entry for "goodwill." Readers know how much I love that. When adding what the firm refers to as "intangible assets" to "goodwill", non-definable assets comprise a rough 75% of total assets. Doesn't that seem a little bit ridiculous to you?

Total liabilities less equity runs to $1.158B, so assets dwarf liabilities whether or not the entry for goodwill is downsized. Even completely excluding the entries for both goodwill and intangible assets (yes, I know that goodwill is an intangible asset), assets still outweigh liabilities. All that said, I very reluctantly give Tilray's balance sheet a passing grade, but I do not love it.

Tilray is okay in my book for speculation.

The variety in products helps. The deal with Whole Foods helps. The firm is clearly putting in the work to reign in the liability side of the balance sheet. I wouldn't go "all in" on Tilray or any of the existing cannabis stocks based purely on the hope that the Senate passes some form of federal cannabis legalization. I do think however, this name could be okay, at this level for a trade. By the way, as of mid-March... 14% of the entire float was held in short positions. 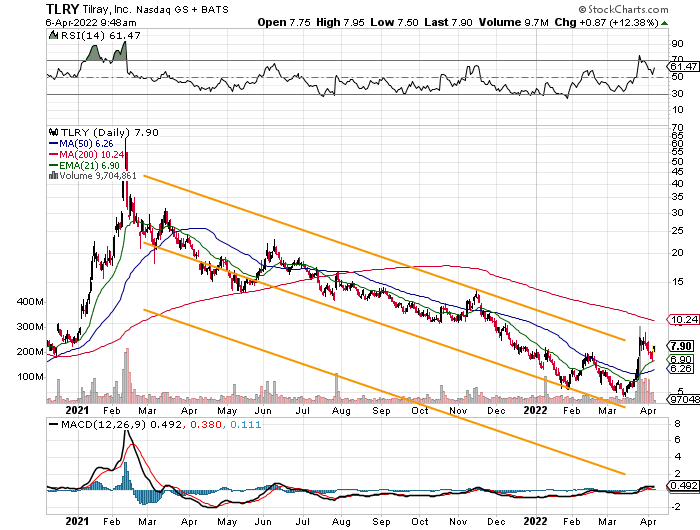 Readers will see that TLRY has been engaged in an attempt to break out of trend for several days now, but has so far failed to complete that move. It would be my preference to wait for confirmation of a take and hold of that upper trend line prior to allocating capital toward equity. Once support is established, the likeliest target would in my opinion, be the 200 day SMA, currently $10.24.

Get an email alert each time I write an article for Real Money. Click the "+Follow" next to my byline to this article.
TAGS: Earnings | Investing | Stocks | Technical Analysis | Trading | Marijuana | Cannabis