By TIMOTHY COLLINS Aug 13, 2019 | 01:54 PM EDT
Stocks quotes in this article: TLRY, VFF, APHA, CRLBF, OGI, ACRGF, CGC
It still baffles me when an investor races toward Tilray ( TLRY) rather than scooping up a more profitable cannabis name at a more attractive valuation.
You can pick almost any fundamental measurement and find another name in the sector more attractive than the $4 billion-plus valuation on Tilray. That said, it's nearly impossible to find another name with a float as tight as Tilray. The staunch handed majority holder coupled with a few exchange-traded funds in the sector virtually make Tilray a stock that has found a floor, simply because there is no one able or left to sell it.
The company has been a disappointment for the better part of a year when it comes to reporting earnings. It finally set aside its approach to creating partnerships in the industry when it purchased Manitoba Harvest to break into the hemp and natural foods market. It's a small purchase at over $300 million, but a nice diversification.
Don't get me wrong, Tilray has some attractive qualities, like its push into hemp and CBD. Maybe the most intriguing factor is the ability to import oil into the U.K. and Ireland,  as well as the outdoor cultivation in Portugal. In short, the company is making a strong move in Europe. The market there won't be nearly as large as the U.S. market, but there's no shame in grabbing the low hanging fruit.
CBD is all the rage in conversation around hemp and cannabis, but I get the feeling the U.S. market is currently saturated with low-quality product. It's nearly impossible to find a gas station not selling some sort of CBD tinctures or avoid an email offering CBD as a miracle cure. Until we hear from the Food and Drug Administration, I believe the current glut of gas station and mail-order CBD crud (aka "can't buy dis") will hold back growth.
Tilray isn't calling for profitability until at least the second half of 2019, which makes me wonder why investors wouldn't first scoop up profitable names like Village Farms International ( VFF) and Aphria ( APHA) or smaller names closer to profitability like Cresco Labs ( CRLBF) or Organigram ( OGI) . Heck, the discount on Acreage Holdings  ( ACRGF) to the potential Canopy Growth ( CGC) makes it more attractive than Tilray here in my view. 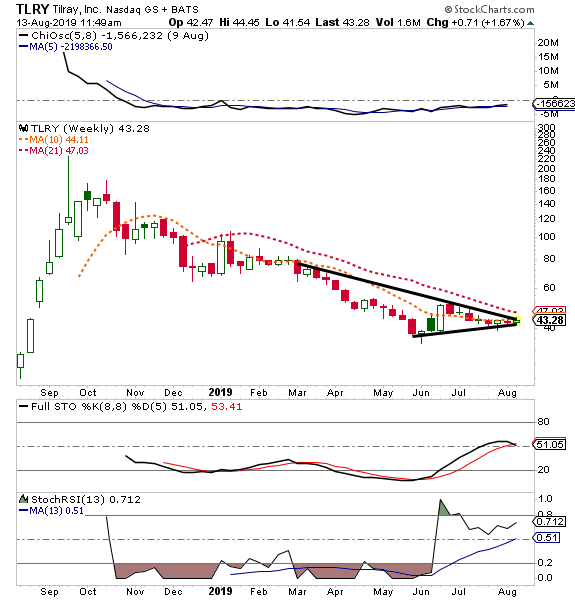 The options' market is pricing a move around 11% this week. That's actually much smaller than what we've seen over the past three reports, but the price action is so tight here on Tilray, I actually think it may be under-pricing the move this week.
September's options are priced in the 20% movement range. That's less surprising given the time until expiration, the recent struggles in the sector, and the overall market volatility. On first glance, I'd see the chart appears to be bottoming based on price, but that Full Stochastics crossover potential is worrisome. If I were taking a position here, it would be long volatility or simply long the stock. Fortunately, I don't have to trade it, so I will simply watch, but it is worth noting that a move higher could easily morph into a squeeze, so I would not be in a hurry to short any pop.
Get an email alert each time I write an article for Real Money. Click the "+Follow" next to my byline to this article.
TAGS: Investing | Stocks | Cannabis | Stock of the Day | Earnings Preview