By STEPHEN GUILFOYLE Aug 13, 2019 | 11:45 AM EDT
Stocks quotes in this article: NVDA, AMAT, BABA, M, WMT, DDS, JCP, TLRY, CGC, NVS, BUD
On deck. Ninety percent of corporate America has already stepped to the plate. There are still a few higher profile tech names out there. Nvidia ( NVDA) and Applied Materials ( AMAT) come to mind. Several Chinese domiciled firms have yet to report, too, most notably Alibaba ( BABA) .
Then there are the retailers. They are coming, and coming in size. Macy's ( M) will lead off on Wednesday morning, then Walmart ( WMT) , Dillard's ( DDS) , and the curiosity that is JC Penney ( JCP)  report. Perhaps overlooked, are a couple of headline level Canadian cannabis producers, Tilray ( TLRY)  is Tuesday night, and Canopy Growth ( CGC)  is on Wednesday. It seems that in the blink of an eye, cannabis went from hot, hot, hot to cold as ice. Let's take a look at Tilray. Shall we?

The Toronto-based cannabis producer will put second-quarter performance to the tape after the second bell. The conference call, which for money-losing operations -- heck, really for everyone in this day and age -- is often more important than results, is scheduled for 5 p.m. ET.
Current expectations are for a loss per share of 27 cents on revenue of roughly $40.2 million. The revenue number, if realized, would be good for year-over-year growth of 313%. While the loss would widen significantly from a year ago, at a 27 cent loss, this would be flat sequentially. Whispers out there are for perhaps a penny below consensus. The revenue print will take precedence for investors over the profit/loss, in my opinion.
Understand the groundwork. For the full year 2018, revenue across the entire industry amounted to $12.2 billion. Expectations for this year are for roughly $17 billion. Remember that back in 2018, Cowen estimated the global market for cannabis to size out around $50 billion. Cowen analyst Vivien Azer, by the way, is considered a leader in the industry of cannabis.
The largest impediment to success for firms like Tilray remains federal legalization of marijuana across the U.S. A total of 33 states as well as the District of Columbia allow legalized medical use cannabis, and 11 of those also allow some recreational use.
Once cannabis is legalized, it becomes difficult to imagine that U.S. domiciled firms will not emerge to compete with their Canadian counterparts that will obviously have a significant head start.
This is one reason why partnerships -- or even equity stakes -- with larger U.S. firms are a key focus for the industry at this point. Tilray, it appears, has a competitive advantage here. Currently, Tilray has a deal in place with Sandoz, a Novartis ( NVS)  subsidiary, to distribute non-combustible product where legal. Tilray also has a significant deal -- worth about $100 million -- in place with Anheuser-Busch InBev ( BUD) to create non-alcoholic beverages infused with CBD or THC or both, where legal.

The Chart: A Tough Technical Read 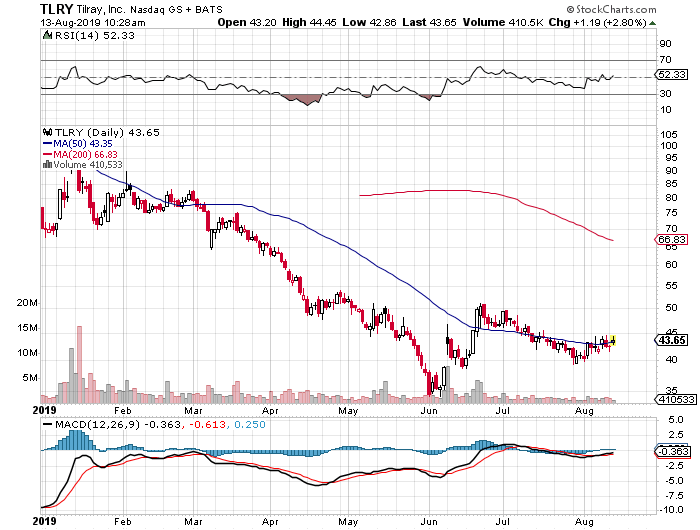 While the daily MACD and Relative Strength apparently offer us little in the way of technical analysis for this company, it may be important that the shares appear to be taking the 50-day simple moving average amid Tuesday's broader-based rally.
Understand that by most metrics, these shares are, even though down for the year, over-valued. Forget about a price-to-earnings ratio, these shares are trading at 73-times trailing sales, but "only" 23-times expected sales.
This data, though will change by Tuesday evening.
An investor is not truly able to analyze this name fundamentally. This is speculative. That understood, I would not enter into an equity stake with out doing something either to hedge the position, or to reduce net basis. Traders who decide to go this route, will do it without me. This is not a condemnation. I am happy with my book the way it is. That said, a trader interested in getting in ahead of the numbers, but also interested in controlling net basis could....

Get an email alert each time I write an article for Real Money. Click the "+Follow" next to my byline to this article.
TAGS: Earnings | Investing | Stocks | Cannabis