By BRUCE KAMICH Aug 26, 2019 | 11:45 AM EDT
Stocks quotes in this article: TIF
Tiffany & Co. ( TIF) was slammed Friday as the broad market retreated on a host of worries. Earnings are due out soon (Aug. 28) so let's see if Friday's decline was telling us something about the stock or the broad market.
In the daily bar chart of TIF, below, we can see that the stock price of TIF has been struggling the past 12 months. Prices made a recovery rally from December to April but finally failed at the underside of the declining 200-day moving average line. Another rally failure can be seen at the beginning of August. The shorter and more sensitive 50-day moving average line has been sporting a negative slope since late May.
The daily On-Balance-Volume (OBV) line shows a peak in April followed by a decline signaling that sellers of TIF have been more aggressive the past five months. The Moving Average Convergence Divergence (MACD) oscillator failed at the underside of the zero line in late July but it now shows a possible cover shorts buy signal.

In this weekly bar chart of TIF, below, we can see that prices peaked 12 months ago and the price strength this year looks like a bounce in a longer-term decline. The 40-week moving average line has been in a decline since the fall of 2018.
The weekly OBV line shows a recovery from December but the bigger pattern is bearish. The MACD oscillator on this longer time frame is in a sell mode.

In this Point and Figure chart of TIF, below, we can see a potential downside price target of $77.46 being projected. A decline to the $77 area puts things close to the December nadir and increases the possibility of further declines. 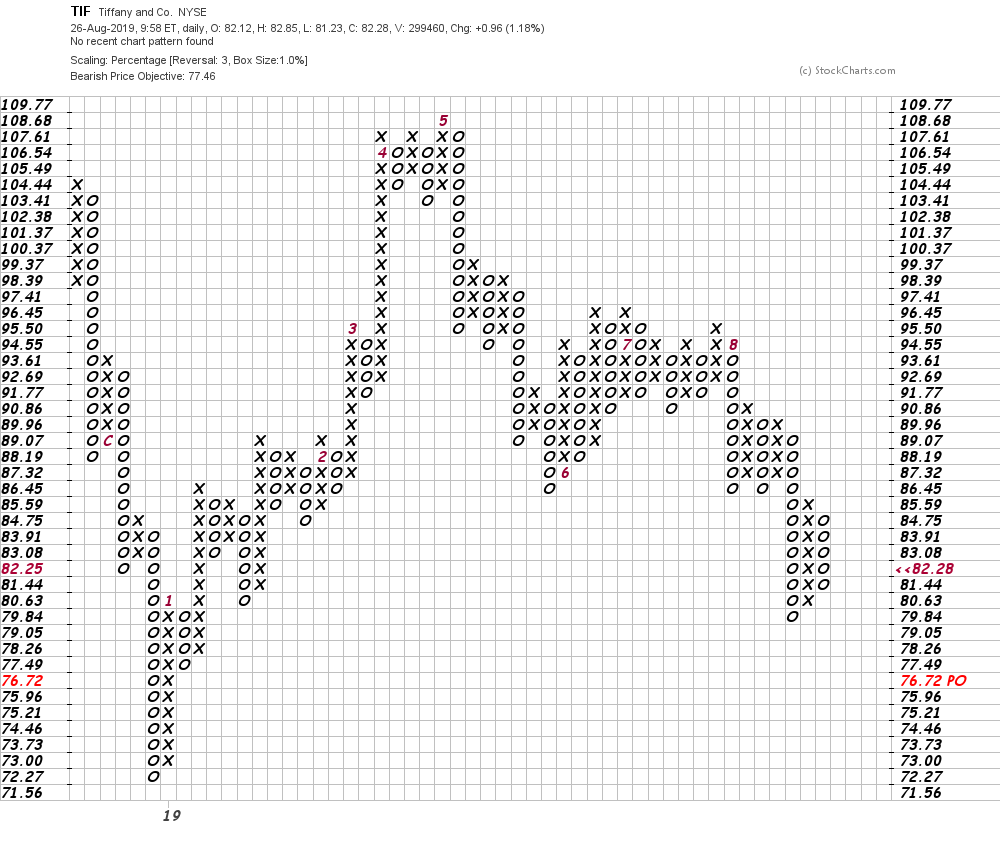 Bottom-line strategy: TIF could bounce a bit in the short-run but the bigger picture I see across the charts (above) is the likelihood of further weakness and a retest of the December low.

Get an email alert each time I write an article for Real Money. Click the "+Follow" next to my byline to this article.
TAGS: Investing | Stocks | Technical Analysis | Consumer Discretionary | Earnings Preview