For his second "Executive Decision" segment of Mad Money Wednesday night, Jim Cramer spoke with Donald McClymont, chairman and CEO of Indie Semiconductor, the automobile chipmaker that will soon be merging with Thunder Bridge Acquisition (THBR) , a special purpose acquisition company, or SPAC.

Indie will trade under the ticker "INDI."

McClymont explained that Indie was built slowly and carefully over the past 10 years. It takes a long time to establish yourself in the auto business, he said, and they have already done the hard work. There's a big backlog of products to build, which is why Indie is entering the public market to fund their expansion.

When asked why they chose a SPAC over a traditional IPO, McClymont said timing was the driving factor.

Let's check out the charts of THBR.

In the daily Japanese candlestick chart of THBR, below, we can see that the shares made a familiar-looking surge in December with THBR soaring 50% in value in less than one month. Prices peaked and subsequently declined all the way back to its starting point around $10. This is also a familiar pattern on a number of SPACs since February. The slope of the 50-day moving average line is negative and the 200-day line is cresting.

The On-Balance-Volume (OBV) line has declined since late December telling us that sellers of THBR have been more aggressive. Prices made equal lows in March and the 12-day price momentum study made a higher low from early March till now. This is a small bullish divergence.

In this weekly Japanese candlestick chart of THBR, below, we can see the two most recent candles showing lower shadows around $10. The lower shadows suggest that traders are rejecting the lows.

In this daily Point and Figure chart of THBR, below, we see the price decline of the past few months. Prices could bounce but there is overhead chart resistance. 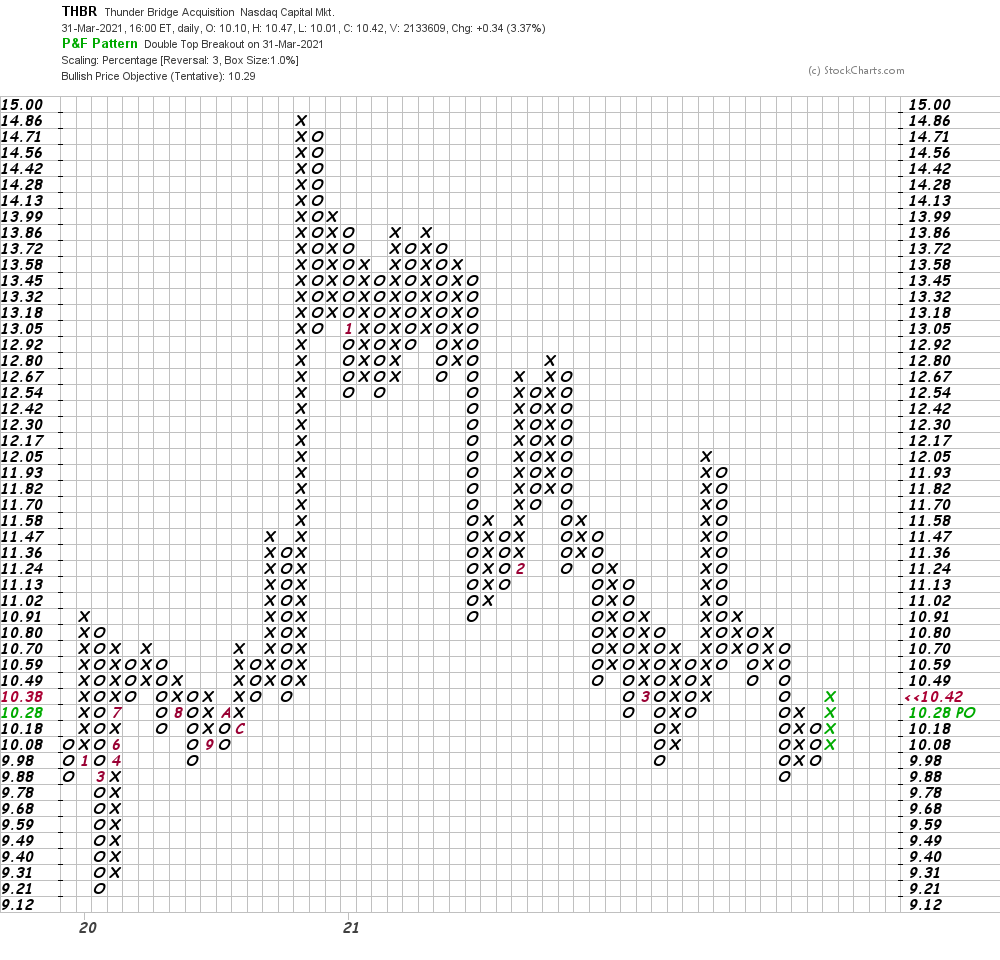 Bottom-line strategy: I don't have the fundamental chops to understand whether this automobile chip maker will succeed in the public market but the downside risk in the stock seems limited right now.

Get an email alert each time I write an article for Real Money. Click the "+Follow" next to my byline to this article.
TAGS: Investing | Stocks | Technical Analysis | Automobile Components | Semiconductors & Semiconductor Equipment | Transportation | Mad Money | Executive Interview