During his "Mad Money" program Friday, Jim Cramer gave his game plan for this week, starting with Thor Industries Inc. (THO) and Eli Lilly and Co. (LLY) , the latter of which will be meeting with analysts. Cramer said Thor had gone from market darling to disappointment and he sees no catalyst for a turnaround. He did expect good things from Lilly, however, and he'd be a buyer. Let's check out the charts of both of these companies before the opening here on Monday.

In this daily bar chart of THO, below, we can see that this stock has struggled the past 12 months. Prices bounced with the broad market from late December but have drifted back down near the December low the past six weeks or so. Both the 50-day moving average line and the 200-day moving average line have bearish slopes. The volume pattern does not show a rise in the first quarter to suggest that the rally is sustainable. The daily On-Balance-Volume (OBV) line only firms in January, which is not enough evidence of aggressive buying. The 12-day price momentum study is not showing us a bullish divergence to foreshadow a potential rally.

In this Point and Figure chart of THO, below, we can see a potential downside price target of $45, which would be a new low for the move down. Not a good endorsement. 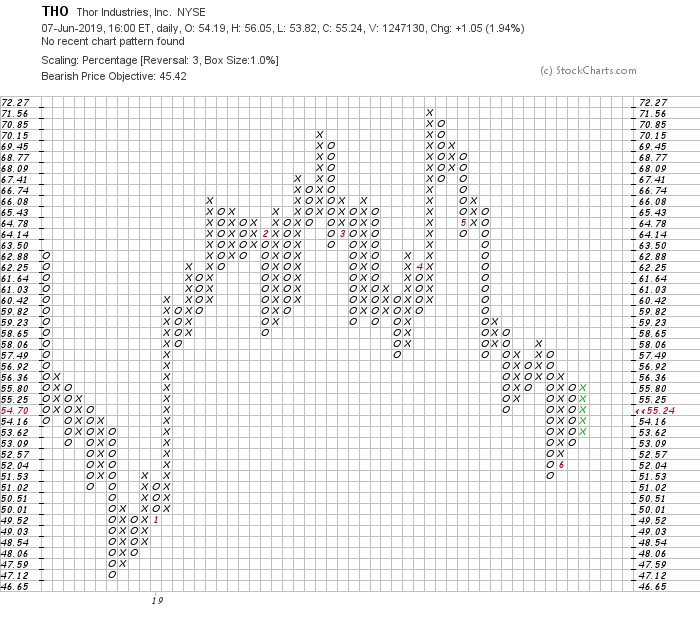 In this daily bar chart of LLY, below, we see a much different narrative. Prices began a rally last June and the 200-day moving average line has a bullish slope. Prices are currently below the declining 50-day moving average line, but that could change quickly with a short rally. The daily OBV line has been steady the past two months and the trend-following Moving Average Convergence Divergence (MACD) oscillator gave a cover shorts buy signal in early May and is not far from the zero line and an outright buy signal.

Bottom line strategy: The charts of THO are not attractive now but LLY is buy-able with sell stop below $113 or on strength above $121.

Get an email alert each time I write an article for Real Money. Click the "+Follow" next to my byline to this article.
TAGS: Investing | Stocks | Technical Analysis | Consumer | Pharmaceuticals | Mad Money | Real Money | Consumer Discretionary

As Race to Chase Strength Fizzles, Here's the Question

Hopes for a 'V'-shaped recovery were high at first Tuesday morning, but now we must ask: Does the intraday reversal signal resumed selling momentum or a healthy pause to digest Monday's bounce?

Is This the Start of a Bull Market or a False Breakout?

Buying the market here is about pricing the economic recovery and the end of financial damage being priced into these stocks.

NFLX is oh so close.

You've seen the rage over how much money these companies seeking bailouts have spent on buybacks and dividends -- but let's look at this from an aerial view.

Here's a SPY Straddle Play for a Bouncy Day

Prices are jumping around, but the concept and pricing of the straddle should not change, so here's where to keep your focus.