There have been times throughout my life where I have noticed the qualities of natural leadership in others. Not the kind that comes from appointment. That kind of leadership sometimes requires development after an individual is already placed in that position. Sometimes that development never actually evolves. Other times, either in a crisis, or perhaps simply in a group of folks who are otherwise friends, one can spot who is looked at either in an admirable way, or simply to make decisions, both large and small, for the larger group.

For so long, Apple (AAPL) has been a leader in corporate America. Throw in the group of four once labeled by Jim Cramer as FANG -- Facebook (FB) , Amazon (AMZN) , Netflix (NFLX) and Alphabet/Google (GOOG) , (GOOGL) -- and you had a core for market leadership that led largely thanks to expectations for growth, more than for fundamental value, though to say that there was none of the latter would at this point be disingenuous. Apple was clearly, and still is, a value name. The leadership narrowed at times throughout the life of the bull market, exacerbated by the evolution of both market models, and investment styles.

Getting the right price became far less focused on by portfolio managers (something I still don't get) and speed of execution became the way to make a buck without doing all of the requisite homework. The market model changed from one where each order was represented audibly at a centralized point of sale, to one where location and electronic pathways were more desirable than intelligent thought -- or the ability to reason when those around one are losing their minds.

Go talk to your non-market friends. Ask them about their investment styles, or their retirement money. These good folks may know what kind of fund they are currently in, at least the more astute among them, but many don't even know that... and very few even bother to think about individual stocks. High-tech names that we think so common, like Nvidia (NVDA) , or Salesforce (CRM) , those folks living next door to you may have never heard of.

Each and every one of you knows that forty or fifty years ago, high school seniors could fumble their way through a corporate balance sheet if they had to. Now, do you think that the guy across the street from you has worried for a second about forward-looking valuations? I am not knocking anyone, but I really think the public is far less financially literate than maybe ever before. That's why passive investment is so popular, and that's why market models have changed in ways that have reduced transparency. Folks do not even know that they have been asleep at the switch.

Is it concern over prospects for global economic growth? Is it Italy? A no-deal Brexit? China? Dollar strength? Yes. All of the above. Maybe you caught the Chinese October New Loans data early on Tuesday morning? I did not know it was possible to miss expectations by that wide a margin. That print came direct from the PBOC (China's central bank). I can hardly wait until Tuesday night in New York (Wednesday in Beijing) when China's National Bureau of Statistics goes to the tape with their October numbers for Retail Sales, Industrial Production and Fixed Asset Investment. Perhaps, though frightening, a poor showing would be welcome by world markets if this pressures the regime into thinking about compromise.

It is really the never-ending strength now seen in the U.S. dollar that I think causes the most pain in U.S. markets. It's not just the economic slowdown being experienced in China, but European budgetary politics on top of the unknown potential impact of a no-deal Brexit on growth. And then of course, the Federal Reserve's seeming lack of situational awareness.

I have harped on that recently, so I won't bore you to death, but understand that tightening monetary conditions into slowing global growth, while a nation is undergoing a significant trade conflict with key partners, thus forcing one's own currency to spike higher in value -- well, it's hard to say anything complimentary about such overt aggression. Sort of like doing chin-ups off an interstate overpass just to see if you could do it.

By the way, the reason why the financials will never return to market leadership is because the central bank tried to normalize interest rates and the balance sheet at the same time, prior to repairing the yield curve. This is so obvious that I just shake my head while typing out this missive.

How do you repair the yield curve now? You can't. At this point, if the central bank tried to reverse "Operation Twist," one can only imagine the economic carnage. If they tried that first, they would have been selling the long end at a premium, while keeping the short end in place. Too easy.

Markets could have stood that at the time, and the banks would have been entrenched as much-needed leaders in a normalized market, and a normalized economy most in need. Two years ago, the U.S. 10-year note gave up less than 1.4%. This could have been done. If only some one had the courage to act. Or ask.

Forward-looking P/E ratios for the S&P 500 in general have now dropped to around 15x. This is well below the five-year average. Then again, over those five years, a decade's worth of perverse monetary conditions had forced those with the ability to invest to overvalue assets of all kinds -- including equities.

The point is, just throw out what you think of as historical norms. There are none. For the reporting season currently nearing completion, S&P 500 earnings growth was quite robust, at roughly 26%. That's the most aggressive growth seen in any one quarter in eight years. Revenue growth for the quarter now stands at more than 9%. Markets have not reacted well. Winners have not been rewarded and everyone of us running a net-long book knows that losers have been punished... severely.

The problem is this. While the market is trying to price in all of the conditions that have already been mentioned above, it also has to price in our own fiscal slop, as well as the fact that this quarter truly was "peak earnings." As the economy almost inevitably slows, so will earnings growth.

Go, ahead, pull up the most recent Factset Earnings Insight. I'll wait. According to that document, expectations for this fourth quarter are running at growth of 14.2% for earnings and 6.7% for revenue. Going into the first and second calendar quarters of 2019, it gets even worse. I have been writing to you, and telling you on the air, that I am shaving profits on rallies over these last two months of the year. I'll still trade short-term, but investments cannot stand alone without risk management. There is too much out there trying to hurt you. You must rise and fight.

Macy's (M) has run over the past month or so close to in-line with many retailers, while the rest of Rome has burned down. The name trades at 10.4x forward-looking earnings, suggesting a below-average valuation through that metric in relation to its peer group. Cash flow is there. So is debt, a lot of debt. The firm's Current Ratio does imply that it will not run into a jam at some point should cash flow stay on track.

I am not in love with Macy's. I did make some money on the long side earlier in the year. I am tempted to short this one almost as much as I am to buy it, but that dividend. I hate chasing stocks that run into earnings. Then again, should an investor hang onto this name long term, the 4% yield will knock $1.51 off of net basis every year. Not too shabby for a $37 stock.

Industry expectations are for EPS of $0.14 on revenue of $5.4 billion. Whispers are running to the high side, not that this means much in November of 2018. 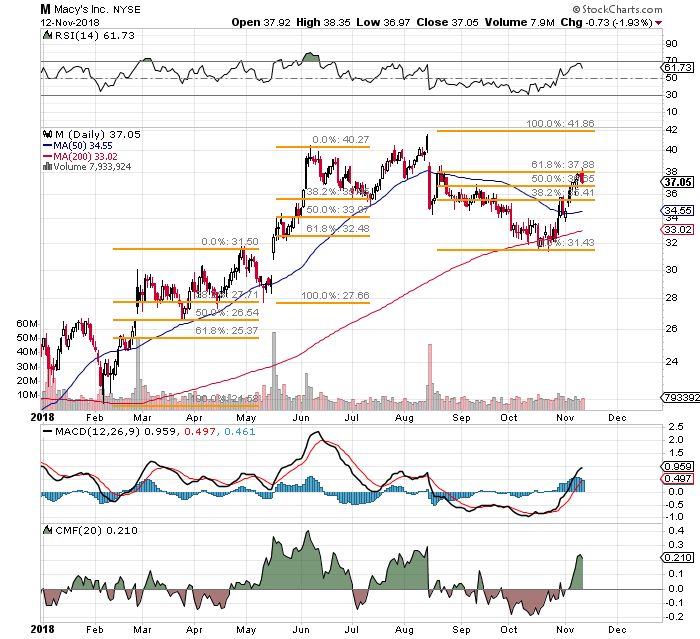 This is the game. From the chart, it is clear that the guys writing the algos that run this name respect standard Fibonacci levels. That means the short-term upside runs to about $42, the downside as far as $32 with a last sale smack dab in the middle. Okay, how to get involved, and stay hedged? I have an idea. Macy's will report again in late February. Let's use that to our advantage.

Macy's will pay a $0.38 quarterly dividend on January 2 to shareholders of record on December 14.

2) The trader gained this leverage by allowing gains to be maximized through February at a market price of $42 (or a net profit of 17.5%).

3) The trader has also hedged his position through next Friday (post-earnings) by purchasing the put, which is fully paid for by making the other transactions. Of course, now that trader will never see the dividend payment -- taking net basis back up to $36.11. Max loss by next Friday: 11.4%.