I have been following this indicator for more than 20 years and have always spent a fair bit of time scoffing at it. The reason I scoff at it is because it is very unscientific in its methodology. When we look at the Investor's Intelligence poll, we know that there is a set number of around 100 newsletter writers that they look at each week to determine if they are bullish or bearish. The same group. The same number. Oh sure, these tend to move more slowly since they do not jump around like day traders, but the Investor's Intelligence surveys have been around since the 1960s and have been quite useful over the years.

AAII has no set number of respondents each week. Not only might the number shift around each week, but those who actually participate might change week to week. Thus their methodology is much more random. I also think there is a time bias. The voting closes on Tuesday. So often the direction of Tuesday's trading has an effect on the tally that comes out on Thursday.

Recall that in the March decline, the bulls in this survey never got under 30%. Seems odd doesn't it? Yet, so many Tuesdays were rally days in March. I think that's why the bulls never truly pulled in their horns. Now comes this week and not only is Tuesday down 3%, but beloved tech stocks got smacked, and it was the first consecutive red days in the month of April.

So sure, the AAII numbers should have skewed toward more bearish due to the time effect, but for the bulls to fall to 25%, lower than we ever saw in March? Or the bears to surge back to 50%? 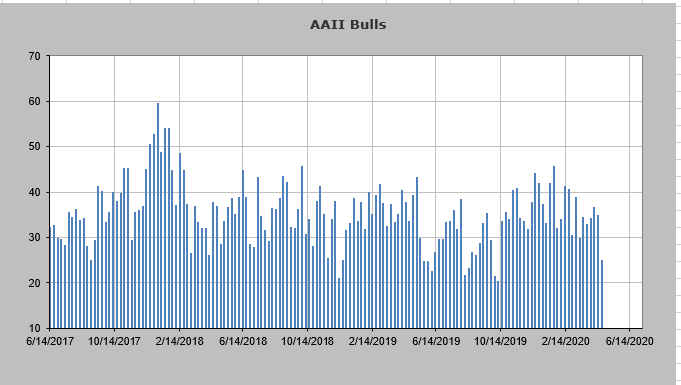 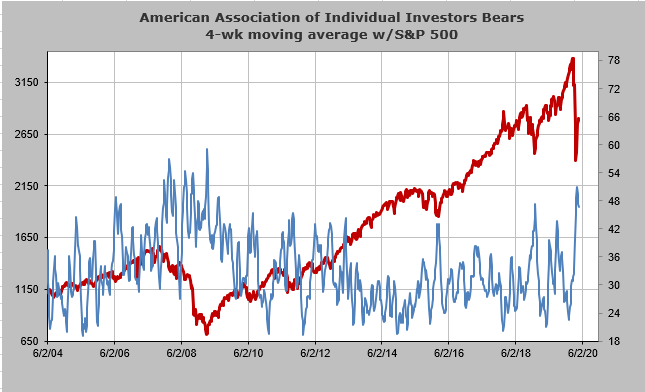 Now I hate to rationalize an indicator, so I won't rationalize that this clearly says folks are not terribly charged up about the rally, but I would have to say this particular sentiment indicator is now an outlier in its extreme readings.

Just look at the put/call ratio, which has remained elevated during the rally for the most part. But Thursday it managed to close at 88%, which curiously is the first close under 90% in almost a month and only the second one in two months. I would say it's a shift.

We see the 10-day moving average of the put/call ratio is now at 95%, which is more neutral than anything, but that moving average has come down from 130%. Again, a shift.

Away from the AAII readings, I am going to report there is still no change in the indicators. Perhaps the only minor change is that for the first time the 30-day moving average of the advance/decline line crossed the zero-line, thus stepping a toe into overbought territory.