If I had told you after last Friday's decline, followed by Monday's decline, that we would get the first consecutive green days in the S&P 500 in five weeks this week you would have been thrilled, right? Yet no one seems thrilled because we came off the high. I mean, the Russell had rallied nearly 20% in a few days, did you think we should just go for 30% in four days?

I began my career, like most, sitting in front of a screen all day, watching blinking prices, watching news scroll. Then in the mid-1990s, after sitting in front of a screen for 15 years, my husband and I moved to Asia for his job. Depending on the time of the year, the time difference to New York, or Eastern Standard Time, can be 12 or 13 hours (there is no daylight saving time in Asia). I tried my hardest at first to stay awake at night and sleep or take naps during the day so that I could continue to trade and watch all those blinking tickers. And the news, let's not forget the news.

But after a few months of sleeping on the sofa in my office for so many hours each night, I decided it was time for a change. I made my trading decisions based on my indicators and charts and set my computer and went to sleep at a normal hour. I admit, I usually woke with an hour to go in the trading day -- around 3 a.m. my time -- but here's what I discovered: I did better when I had a plan, I stuck to it, and I didn't let the blinking lights and the news distract me from my plan.

In the past few days, the news out of Washington has been a form of "let's lurch from excited to disappointed," and back to excitement and disappointment. Unless you are a day trader, it hasn't helped you much, has it?

The indicators said we should rally this week, better than we have up until this point. And you know what? We have. We have had the first consecutive green days in the S&P in five weeks. We had terrific breadth on Tuesday and Wednesday wasn't so bad either. In fact it was enough to get the McClellan Summation Index to turn up.

The good news is that for the first time since January, this indicator needs a net negative of -2000 advancers minus decliners to turn back down. Sure we've had plenty of negative 2,000 days, so it's not as though the indicator is home free, but that is a big change. The bad news is at negative 2,000 it has stepped a toe into short-term overbought territory.

As far as sentiment goes, the Investor's Intelligence bulls fell to 30%, which is the lowest reading since they were 29% in December 2018. For perspective in October 2008 they got to 22%. 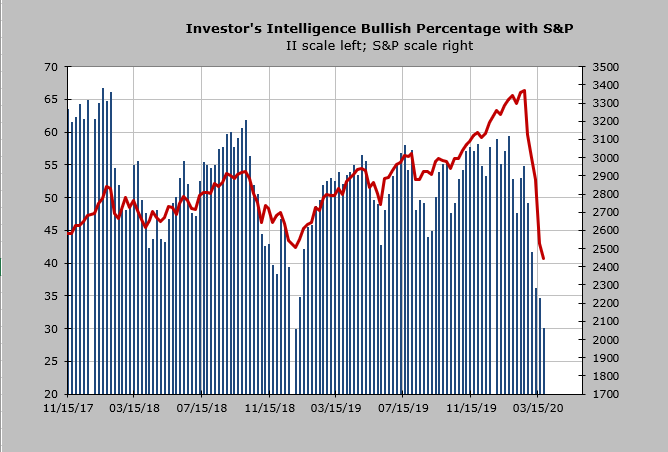 The bears now outnumber the bulls by more than 10 points with the bears at 41%. This is higher than December 2018. In October 2008 they were at 54%. I consider this a plus for the market.

This is the first rally we have had of any substance off the lows. I expect there will be testing and retesting and rallies and more testing in the months ahead. I can't possibly consider that I could day trade these wild swings, but I do know the indicators say some of the selling has dried up for now, and that sentiment got too bearish. I have no idea what the market will do on a day-to-day basis, but I suspect even if we pull back for a day or two, we will rally again before we get a real retest. I don't intend to sleep through it, but if watching the blinking tickers all day long is making you on edge, maybe it's time to take a step back. Oh, and mute the news, because it will probably get worse before it gets better. You'll probably sleep better too.