We have officially entered the Katy Perry market. You're hot, then you're cold....

That's not just today, either. The end of the year feels edgy. This last month will put Santa and his ability to rally stocks to the test. Let's take a look at where we stand.

The S&P 500 continues to dominate the headlines, but it definitely isn't outperforming. The index did get rejected at the 21-day simple moving average (SMA) on Monday on its first bounce attempt. Now, it looks like we have the 50-day SMA squarely in our sights for a test (check this chart of the ( SPY) fund). We could easily hit that Wednesday as it is only $3 lower. Since we are nowhere near oversold in terms of trend or momentum, I suspect we'll test it this week if not Wednesday. That level ties in well to the September high, right before a pull back. I would look for the Full Stochastics to try and bounce off 20 as well like we saw in September and October. I'd look for that to happen in the $440 to $442 range. 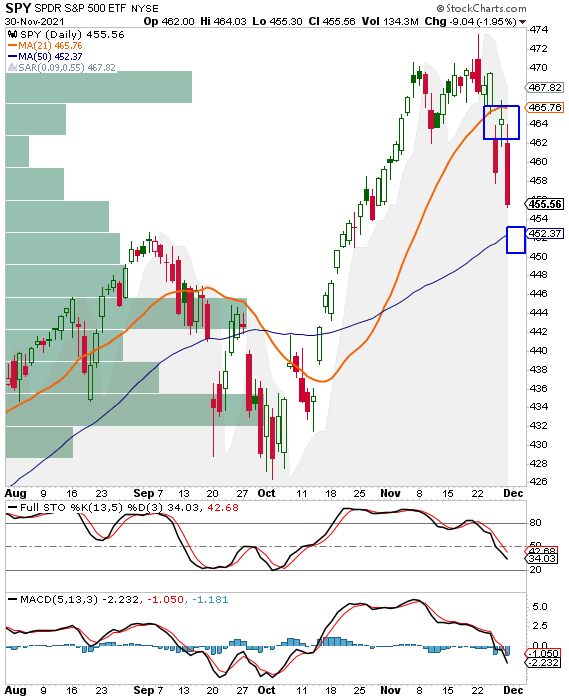 The Invesco QQQ Trust ( QQQ) continues to be the best of the group but even that is showing cracks. We're back under the 21-day SMA today, running in a small channel that could be a subtle bearish flag. A close under Tuesday's lows puts us at risk of another quick 3% to the downside. We should find support around the $380 to $382.50 level, but I'm sure bulls would prefer not to test it. Unfortunately, trend and momentum are nowhere near oversold. On the plus side, they could easily turn higher here and recapture an upside swing. I don't think I'd be a player on the long side until we are back above $400, but if we close under $390, I will be looking at the short side. 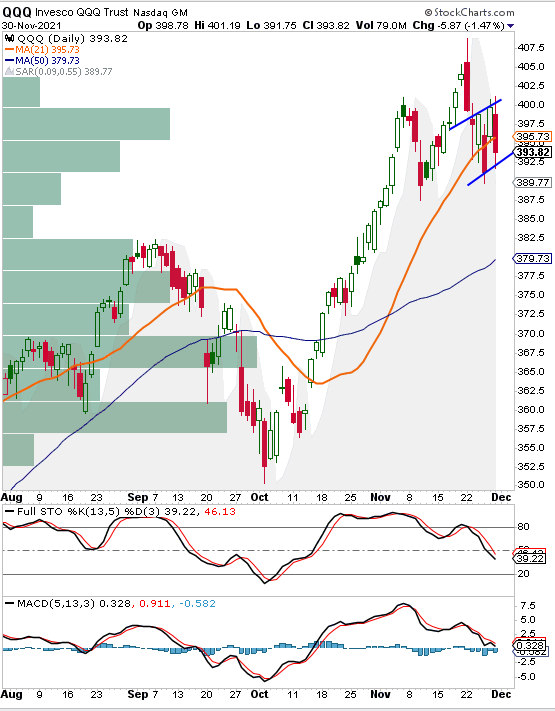 Lastly, the iShares Russell 2000 ( IWM)  has been a train wreck for most of November. We revisited the September closing lows where we found buyers now. A close under $216 will likely result in a trip to $211. Unlike the other two indexes, IWM is grossly oversold right now. We have a small bullish divergence in the Full Stochastic indicator. If I'm leaning toward a bounce candidate, it would be here, as I see $7 down vs. $10-plus on the upside. I wouldn't call it heavy conviction, but if the Full Stochastics moves above 20, while price hangs out in this area, it may be worth a bit of a lottery ticket. 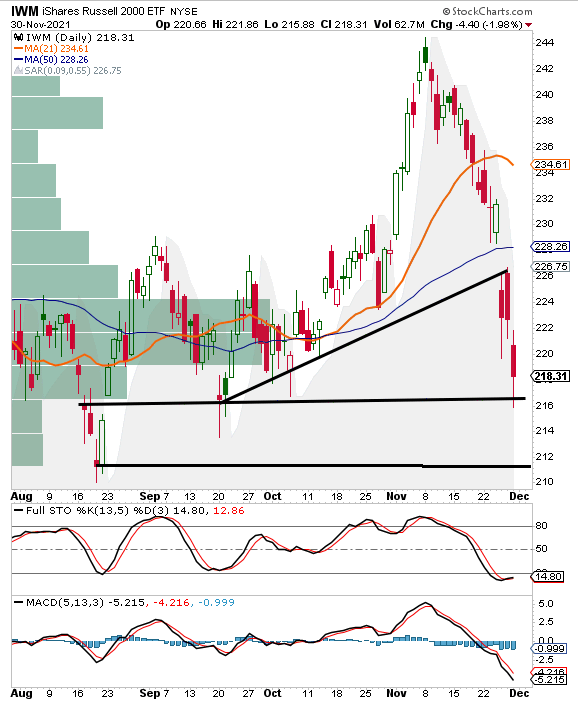 Overall, I expect December to have more bumpy action. I don't foresee disaster from these levels for the large-cap indexes, but the Russell 2000 sits in a very dangerous place. We need a bit of a rally in the more speculative names if we want to start 2022 on the right foot.


Get an email alert each time I write an article for Real Money. Click the "+Follow" next to my byline to this article.
TAGS: Investing | Options | Stocks