At least last summer when breadth turned sour and the indexes held up we could pinpoint the strength to technology as a whole. We could see it in the mega-cap tech stocks. The rally was heavily concentrated in those names, but it was spread out among tech in general.

On Wednesday a few of the index movers were up, and that held up the major indexes much better than the rest of the market. Breadth, which has been deteriorating for a week or so continued its deterioration. The only good news is that on Wednesday, it was so glaring that everyone could see it handily. It was the third straight negative breadth day, something we haven't seen in two months.

Not only that, but the number of stocks making new lows is soaring. Nasdaq has more new highs than new lows. That is highly unusual for a market at new highs. It also means it is harder to find stocks that are going up and easier to find ones that are going down. Nasdaq's new lows are now closing in on the peak reading we saw at the September and October lows.

I always ask myself: If the index fell back to those lows would we have fewer stocks making new lows than we had then? In this case, I think we can agree, the answer would be no. 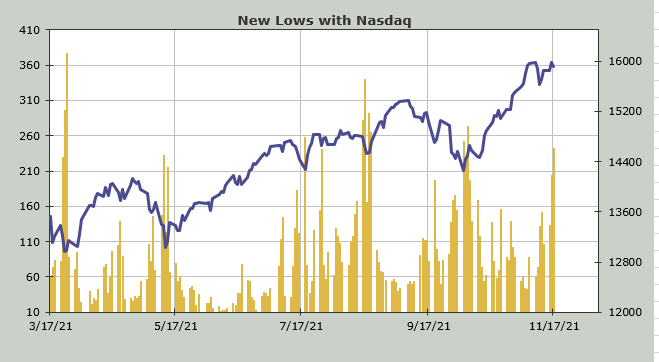 Oh, we might excuse Nasdaq with all those biotechs on the new low list, but what about the New York Stock Exchange? Up until this week it hadn't been too glaring, but that has now changed. The NYSE had 80 new lows on Wednesday. That is double what it began the week with. Keep in mind the S&P 500 is still up on the week -- barely. The NYSE new lows are now closing in on the peak reading we had two months ago when the S&P was at 4,400. I simply cannot spin that positively. 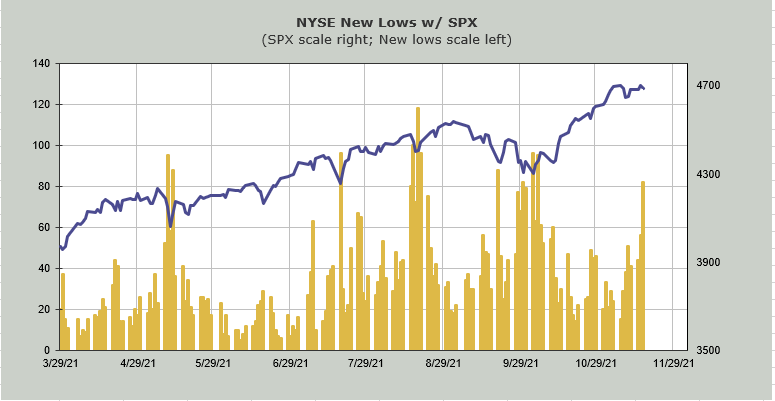 I don't think we've even seen a decent shift in sentiment yet. The put/call ratio on Wednesday was .81. It was higher a week ago when the beloved FANG names got hit. On Thursday, we'll get the freshest reading for the surveys from this week when the American Association of Individual Investors survey is released. I would expect it will reflect the poor action, but we'll see by how much.

The National Association of Active Investment Managers exposure could see a decline, too. But it was 108 two weeks ago and 103 last week. I don't expect it will fall much below 90 this week.