As those of you lucky enough to wake up on this side of the dirt on Friday morning rip that crazy thing atop your shoulders from the warmth of that comfy pillow, I am sure you wonder. You wonder... does the human animal have an innate character? To put it plainly, are we inherently good? Are we evil? After coming to no conclusion, and perhaps brushing one's teeth, the next thought likely concerns trend. Are equity markets in a confirmed uptrend? It seems absurd to even consider the thought. That said, markets just might be heading in that direction.

Consider the curious case of Thursday. After baptism through algorithmic fire, our central bankers now appear to understand that every speech, every utterance comes with a market reflex. Like the Patellar Reflex, also known commonly as the "knee-jerk", this response is both immediate and involuntary.

Far too quickly for you and I to dissect, one set of algorithms will respond to news-related keywords, while the next group responds to momentum. So trend, always highly important, becomes even more so, now that reasoned thought has been removed as a factor in price discovery. Or has it?

When the Fed Chair mentioned his doubts concerning global growth, and when he mentioned that he still expected the balance sheet to become "substantially smaller," I fully expected a negative market reaction, and momentarily... there was one. Oh, the keyword readers reacted. Markets leaned into the red. The momentum followers were not there, though.

Instead, when the S&P 500 hit the level that I have been telling you all week was pivotal (between 2570 and 2575), equities found broad support, and the momentum went against the keyword readers. This change in current would have been seen as an epic, "movie worthy" moment, if it had happened in old fashioned crowd style trading.

The point is that this is the kind of reversal that happens in a bull market. I am not yet so easily convinced. The Fed Chair also stated that he has seen no evidence of a domestic economic slowdown in recent months. Does he even know that there are a bevy of free sites that report basic economic data? Because the evidence is everywhere, with the labor market the only consistent outlier.

By the way, Vice Chair Richard Clarida addressed the Money Marketeers on Thursday evening, and seemed quite cognizant of both current conditions, as well, and an openness to potentially adjusting the pace of quantitative tightening. Plainly, while the central bank's missing presence on the bid side at auction has not been felt at the long end of the curve in an overwhelming way, the removal of liquidity that will take months to truly feel, needs to be flexible. You all know that I feel repairing the yield curve needs to be job one, and should have been attempted prior to the start of the normalization process.

There is no doubt that a certain level of finesse that appears beyond the scope of current leadership is probably required. I would like to see implementation of a mild "Operation Un-Twist", where the central bank might actually increase short-term holdings as a way to both finance Treasury while suppressing the short end of the curve. This, while allowing the free market to control the long end, only selling notes and bonds if yields on the long end contract in correlation with the short end. Yes, such a move would require some creativity as well as some courage. Are we good, or are we evil? No, don't answer. Just be courageous.

Another sign, at least to this primarily equities trader (though I'll trade anything from baseball cards to cracker jack prizes) that perhaps the trend may have really changed was the Thursday issuance of $1.5 billion worth of 8.5-year and 10-year paper by a firm some of you never probably have heard of -- Targa Resources. Why was this deal newsworthy? The first new junk bond deal in 41 days. That's why.

A product of a renewed bull? At least a renewed oil bull, which in effect may be one and the same as an equities bull. Remember, gang... energy makes up a disproportionate slice of the high-yield debt market. Remember a couple of weeks ago, when I informed readers that i was loading up on quality oil names such as Exxon Mobil (XOM) , British Petroleum (BP) , and Royal Dutch Shell (RDS.A) ? I cautioned at that time to stick with established, well known dividend payers such as these, and stay away from the junk crowd, as this market could, at some point, present as an unwanted risk.

Is this deal a sign that the worm has turned? Did I claim to be a wise man? What I surely do know is that, according to the Financial Times, North American high-yield funds have seen inflows this week following eight consecutive weeks of outflows. That is at least interesting. By the way, I am not the expert on this matter, but if you need a hand, I've got a guy. That guy is Real Money colleague and dear friend Peter Tchir of Academy Securities. On these matters, I trust no one more.

The Urge To Merge

Investors may have noticed Thursday's 2.4% decline in the market price for Dow Jones Industrial Average component Pfizer (PFE) . PFE was easily the worst performer among those 30 blue chips on a day that saw the average rise by half of one percent. What gives? Well, first one has to review recent news events. Bristol-Myers Squibb (BMY) announces a $74 billion stock and cash takeover of Celgene (CELG) . Then Eli Lilly (LLY) announces that they will spend $8 billion to acquire Loxo Oncology (LOXO) .

What happens when big pharma needs to grow faster than the industry is capable of organically? Consolidation. The Biotech boogie. On Thursday morning, StreetInsider reported on potential interest by Pfizer in Amarin (AMRN) . That stock ran 22% on the day, closing at $18.35. I have criticized some recent deals as having been consummated at levels that I saw as too expensive. Pfizer is one of my names. So, now that this impacts my own book, how do I proceed? 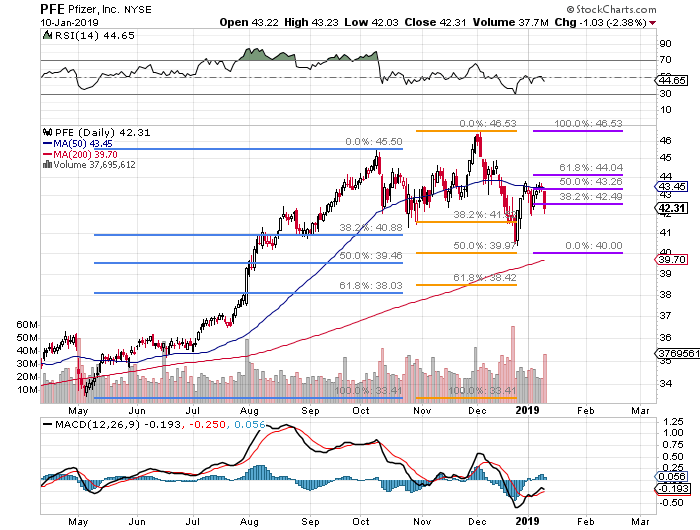 My stated reason for being in Pfizer all along has been price stability and income. For those two reasons, this has been an outstanding position that has done its job in a wildly volatile market. The current dividend yield at this last sale is 3.41%, good for a net basis reduction of $1.44 per annum, or 36 cents a quarter. The stock, by the way, goes ex-div this January 31.

Do I dump the name now that it is under pressure? If hard news breaks, there could be more downside. Of course not. I just told you why I am in this stock, and that the stock performed well in that function. Do nothing? No. At the end of the day, I am here for one reason.. to make money. I am much more likely to add than sit on my hands.

What is obvious is that the algos apparently respect Fibonacci when it comes to Pfizer. Outside of the Christmas Eve massacre, this name has traded between $42 and $46 since October. I don't need to buy the stock at Thursday's closing prices, but below $42, I will be there, incrementally. PFE reports on January 29, two days ahead of the 36 cent haircut. On Thursday night, February 1 $42 puts went out at $1.04. Want to buy Pfizer at a net below $41? That's how. Either the shares are put to the investor there in three weeks, or the investor makes a buck, and takes a pal out to lunch. I am fine with both outcomes.

Get an email alert each time I write an article for Real Money. Click the "+Follow" next to my byline to this article.
TAGS: Earnings | Economic Data | Economy | ETFs | Funds | Indexes | Investing | Markets | Stocks | Trading | Market Recon | U.S. Equity