Monday had something for everyone.

Let's start with how dull the market was -- even with the pop and drop. The bulls would say never short a dull market. The bears would say the market can't hold onto a rally.

The bulls would say the 10-day moving average of New York Stock Exchange's new lows has breached not only 100, but is now lower than it was in late March/early April. In the spring, it was 86 and now it is 78. I do expect this will bottom out later this week. 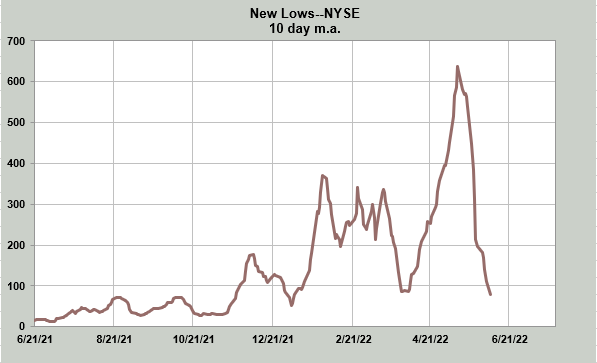 The bears would say that the NYSE Hi-Lo Indicator is already at .45 and it peaked at .51 in March/April.

The bulls would say the 30-day moving average of the advance/decline line is not yet overbought. It still has room to get over the zero-line. The bears might nag that despite a 10% rally, it hasn't gotten over the zero- line.

The bulls might say that the transports were solidly positive on Monday. The bears might say: Look at interest rates back over 3%.

I would say that the Daily Sentiment Index (DSI) for bonds nudged down to 10 (I am surprised, needless to say) from 11 where I thought it would get to single digits. I would still think any rise in rates this week will take it to single digits and provide a reason for bonds to rally (rates to fall).

The bulls would say the McClellan Summation Index is still rising. The bears would say the Russell 2000 got a smidge over 1900 (1903) and couldn't hold on, because there is so much resistance in that area (see Monday's column for a full discussion of the Russell and its resistance).

I think this bull/bear debate is the nature of what happens when the market reaches resistance and gets short-term overbought. In other words, for the time being, the market is doing what it ought to.

You might notice that the Overbought/Oversold Oscillator has not come down much in this chop-fest. I would posit that it is possible/likely that late this week we will see the Oscillator head south (get oversold) in a meaningful way (it's the math). If I am correct in that late this week, the market sells off that would set us up for an oversold rally again sometime next week.