For the last month, most folks have scoffed at the divergences in the market. The ones who haven't scoffed are the ones who own the stocks that are diverging from the indexes, but the folks who are in mega-cap tech and indexes think the world is just fine. And from their perspective, I suppose it is.

One thing we haven't seen very often in this market is the stark divergence in breadth as we have seen for the last five or six weeks. Breadth has gone down, while the S&P 500 has rallied 4%. I have noted that this can go on for years, but is it healthy?

But what happened on Wednesday was a little bit of a different twist. You see, many of the non-FANG tech stocks had been enjoying the rally until about a week or so ago. But since then it has become even more narrow within tech. I like to look at the "next generation QQQ" fund  (QQQJ) . It doesn't trade much, but it shows us how much risk folks are willing to take in the market. You can see it peaked in late June (recall my view that we should pullback in early July), but Wednesday's action was all about "risk off." That's the new twist, that even in tech-land it's gotten too narrow.

You can see the narrowness in Nasdaq's Hi-Lo Indicator. Rarely does Nasdaq keep on rocking upward -- in this case to the tune of 5% -- while this indicator plunges. It is quite typical for Nasdaq to then play catch up with the indicator. But again, this sort of divergence is not common, not as large as this. 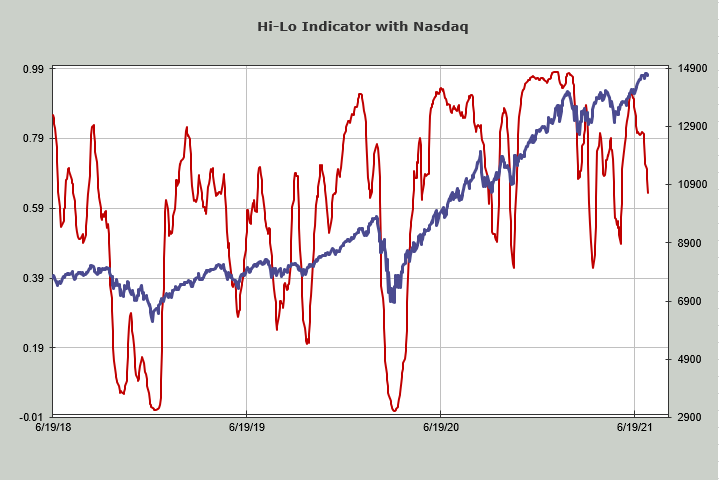 Then there is sentiment. Despite the first two consecutive red days for Nasdaq in a month, the Daily Sentiment Index (DSI) is at 89 for Nasdaq. The Investors Intelligence bulls are at 61.2%. What's more is the bears are at 15.3%. Despite that the majority of stocks are in a downtrend, folks are not concerned at all.

The Russell 2000 exchange-traded fund (IWM) has come close to tagging that line that I have drawn in. At this point, despite the "risk off" we saw on Wednesday, I think complacency is too high. I would like to see a gap down opening under that line. I think it would shake things up. I think it would get folks concerned, especially if the big cap indexes followed on the downside.

If we look at the 10-day moving average of the equity put/call ratio, we see that it has come up quite a lot. Just think how it would spurt upward, if that line broke on IWM. Or if folks decided to sell beloved Apple (AAPL) . A spurt up to the top of the page is ultimately bullish.

I will leave you with one final chart on the market so that you can understand exactly how much selling has taken place under the hood. The Volume Indicator is now at 49%.