Earlier this week, I said I thought the market should come down late in the week because, well, it was the math, according to the Oscillator, and now I am reminded of that old adage about being careful what you wish for.

We had so much selling on Thursday that more than 90% of the volume was on the downside on the New York Stock Exchange. Were folks squaring up in advance of the consumer price index numbers on Friday? Were they selling, because it was becoming clear that the indexes were more likely to break down from the range they have been in all month than up? We don't know, nor should it matter.

What matters is that the market is in a different place than it was a month ago. A month ago, bearishness was sky high. As I noted here yesterday, it is no longer super bearish, although Thursday's action will go a long way toward pushing it back there. The Investors Intelligence bulls were already at 35%, up from 28% in May. The equity put/call ratio's 10-day moving average had fallen from .76 to .56. And now I can add that the National Association of Active Investment Managers moved their exposure this week back to 50. 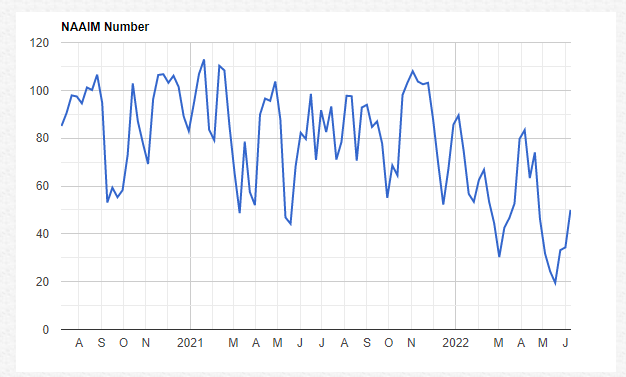 Then there is the total put/call ratio's 10-day moving average. It is now at .96, down from 1.16. It too doesn't scream too much bearishness. 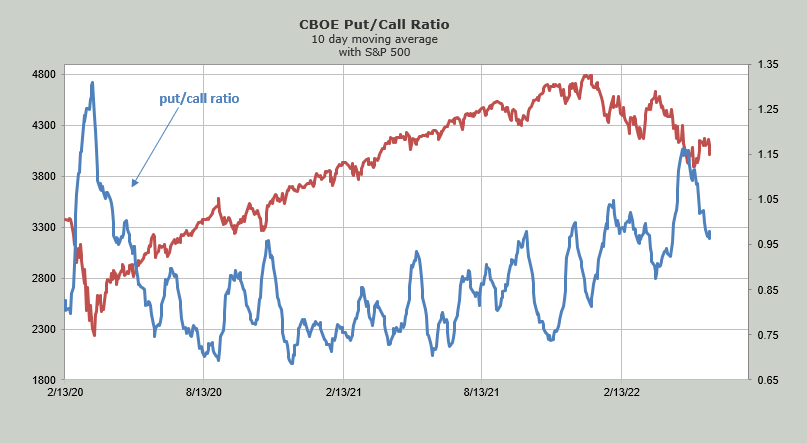 Now let's talk about the Overbought/Oversold Oscillator. The first thing you will notice is that it finally moved down. It has been hovering at the high for nearly two weeks, which is highly unusual in a bear market. But now it has fallen. There are still two more "math" days to go.

By that I mean that in the next two trading days -- so Friday and Monday -- this 10-day moving average of breadth will drop positive 2,167 and positive 2,394 (that's net breadth on the New York Stock Exchange). Even if the market takes a liking to the CPI numbers on Friday and the market rallies, it's hard to imagine breadth will be better than 2,167 Friday and better than 2,394 on Monday, because that's what it will take to get the Oscillator to move up now. Thus the math says the Oscillator should move down.

That's another reason the market is in a different place than it was a month ago. A month ago, the Oscillator (blue line) was at the lows, well under the zero-line. Now it is still above.

By midweek next week, we should be oversold enough to rally again, but I don't think it will be the same situation as it was a month ago, because the intermediate-term indicators will not be oversold as they were in May. For example the Hi-Lo Indicator was at .04 in May and as I noted yesterday, it is back to .62, which means it's not oversold anymore.

One final note is that I really thought the Russell 2000 would make another try up into that 1900-1930 resistance area once we get back to an oversold condition, but now I have my doubts. The 50-day moving average line is already down to 1905.