This week we have witnessed what happens when a market gets oversold and can't rally but instead works it off by going sideways. It's obviously not pretty.

We have also witnessed approximately 80% of the stocks that trade on the New York Stock Exchange make new 52-week lows. Thursday saw another expansion of new lows on both the Nasdaq and the NYSE. My own Hi-Lo Indicator for the NYSE is now at 2. Nasdaq's is at 6. This is all very extreme.

We know it's extreme in the short term, so let 's talk once again about the intermediate-term sentiment gauges. I know folks are still amazed that last week's sentiment readings didn't show fear or panic and I am certain several will not show the type of panic the markets have in the next few days, either.

Thursday we saw the American Association of Individual Investors' weekly survey released with a 9-point drop in in bulls. While that is good news in that bulls have backed off, they remain at 30% which is pretty much where they were two weeks ago. Recall last week they were up 8 points. 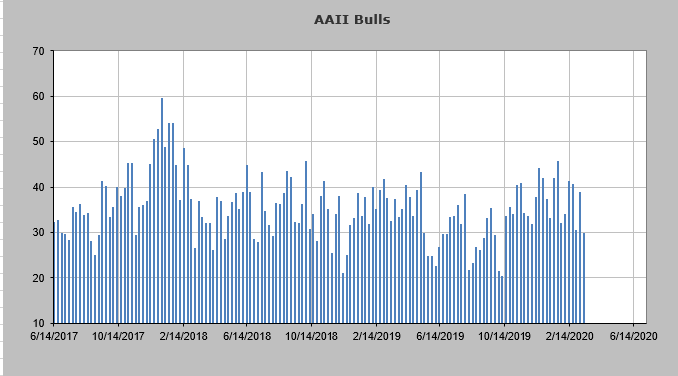 The bear camp did, however, expand rapidly. The bears are now at 51%, which is quite high. So let's move to the four-week moving average of this group. It is still under the October peak and well under the December 2018 peak. Now I grant you it is high but on an intermediate term basis, it doesn't quite fit the size of the decline yet. If they are 50% again next week then the moving average will be right near the October reading. It simply takes time to get these indicators to the same point as the market. 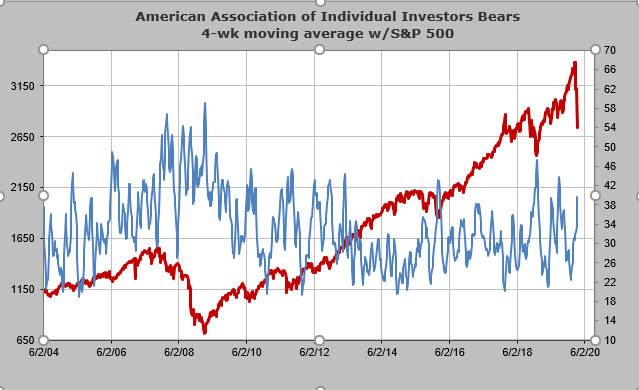 First, notice that it isn't anywhere close to the October low or the December 2018 low. Some might say that it has been a trend of lower highs since 2015, but I would point out that this time it came from such a severe low it will take a while longer to get to the point that we consider extreme on this chart.

Now let's turn to the 30-day moving average of the advance/decline line, what I use as an intermediate-term Oscillator. Here it looks oversold, but I look at the math behind it. Again, I do not show this looking like it will be at a good oversold until April.

I will end with a short-term positive. Monday evening we saw the Daily Sentiment Indicator (DSI) fall to single digits for both Nasdaq and the S&P 500, and we saw the Volatility Index (VIX.X) go to 90. Then we had a big rally on Tuesday. Today, it fell back under 10, this time both stock indexes are at 5, and the VIX is at 93. If it weren't Friday (which has seen a lot red in 2020), I would think we should rally. But perhaps we need to wait for a lift for next week now.

Jim Cramer: Food Companies Are the Winners in This New Stay-at-Home Movement

I think their sales are sustainable in part because we are scared to go to the supermarket but we know we have to because we can't go out much.

Spice Maker McCormick Is Adding Some Heat to the Charts