Shocker? As a trader, investor, and economist who writes on and speaks on the record quite often regarding the state of our nation's economy, public policy and most especially financial markets, there are three things that tick me off when I listen to others that also appeared in the media.

One, would be those who speak about markets in such a broad sense as to not be pinned down should they end up being incorrect or on the other hand... to pretend that they called it, whatever "it" was, after "it" happened. Some of you are reading this. You know who you are.

Secondly, I can not stand those who either do not name names when speaking about stocks, or who work for big firms and having that background, I know that their comments are legally scrubbed responses to questions that had been sent to them the day before.

Lastly, I can not stand those who start almost every answer with "I don't know how anyone could really be surprised by this?" Really? Aren't you the same folks not naming names? Yeah... LOL.

I know, I'm a hypocrite. GameStop (GME) . I honestly don't know how anyone could really be surprised by this. In fact, what I don't understand is how this was not done sooner, or when the stock was trading at even higher prices. That said, from a corporate perspective, at least current management realized that they were letting a golden opportunity slip away and did finally act.

What GameStop did so far was really just enable itself to sell up to $1 billion worth of stock. All we really know is that GameStop has filed a prospectus to sell up to a maximum of 3.5 million shares of common stock from time to time through an "at the market" program. This is not like the big secondary offerings of old where the shares are priced overnight, usually at of slightly below the last sale and a big investment bank ends up supporting the deal price for half a day or two depending on how good a client the issuing company was, or how good clients were where the shares had been placed. Stand there and get hit in the teeth. That's what we used to do.

This is not that. GameStop, using Jefferies (JEF) by the way as a sales agent, and not necessarily an investment banker may or may not make sales, depending on whether or not they like the price or need the money. This type of secondary offering is not done overnight, but might be done over weeks or months. Proceeds will be used to strengthen the balance sheet and for general corporate purposes, which one might imagine would be to facilitate the company's transition from a mall-based dinosaur into a cutting edge e-tailer with a focus on gaming.

GameStop reported global sales up 11% year over year for the nine week period, and up 18% for the five week period (both) ending April 4th, which was yesterday. In other words, publicity, good or bad has been good for business. 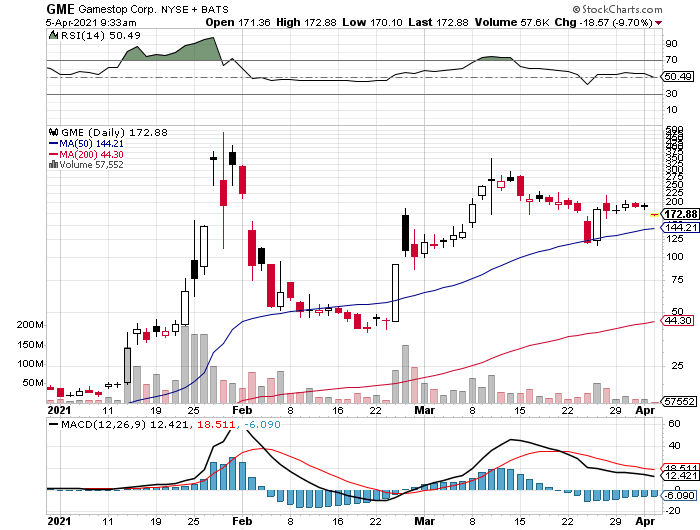 I think most readers, even if they search, will not find any useful technical patterns here that might make a trade. At least I have not. Would I buy equity here? No. Would I sell equity here, if I were long the name? Having missed the really low prices, I would not be long for the name. period. What I am likely to do is reload or add to my derivative positions, which is a cool way of saying, I may write some puts.

With all of the really short-term positions already having expired, I am down to just one series. I am short more than a few January 2021 $10 puts. Now, even with today's $0.10 pop in the value of those puts, they trade nowhere near where I took that original position, but that position may still be worth adding to an implied value of roughly $0.90.

Remember, there are no sure things in this sport, but with Ryan Cohen apparently making his impact felt, I think I am willing to increase an already large bet that I will never have to pay $10 for this stock, and that if I did, I probably would want to.

Get an email alert each time I write an article for Real Money. Click the "+Follow" next to my byline to this article.
TAGS: Investing | Markets | Stocks | Technical Analysis | Trading | Gaming