Indices such as the Dow Jones Industrial Average (DJIA) and S&P 500 ( (SPY) ) are generally viewed as convenient ways to measure the health of the entire stock market. Indeed, they are the indicators that most folks in the business media use to determine if there are uptrends, downtrends, bull markets, or bear markets.

The major indices generally do a good job of measuring overall market health, but there are times when they can be very misleading. The problem is that there a small number of big-cap stocks that can move the indices in one direction while hundreds or even thousands of smaller stocks are moving in the other way.

Over the last 10 weeks, there has been a significant disconnect between the stocks that led early in the year and the indices. Growth stocks, speculative small-caps, hot theme names, and other groups have been very weak for a while, but the S&P 500 was hitting a new high Thursday morning.

For a clearer picture of what is going on out there, a much better indicator is the ARK Innovation ETF (ARKK) . ARKK was in a very strong uptrend off the March 2020 low and gained nearly 400%. The fund held the stocks that market participants favored for a very long time. It topped at $160 on Feb. 16 and a week later had fallen 20% to $128, which is the definition of a bear market.

Since falling into a bear market, ARKK has been in a trading range and continued to languish. It is down more than 3% Thursday as growth stocks and small-caps are taking it on the chin again.

This is what is really going on in the market for most individual traders that focus on stock-picking. The S&P 500 and DJIA are totally disconnected from this action. For most traders it has been a bear market for over two months now, but we never hear about it in the media.

This presents the most crucial question right now: What will happen to ARKK and the stocks that it reflects if there is a major correction in the senior indices? Will they continue to fall, or will there be some rotational action as money comes out of the names that are currently at highs?

There is no easy answer, but that is the dilemma we face if we start to see deeper corrective action in the S&P 500 and DJIA. 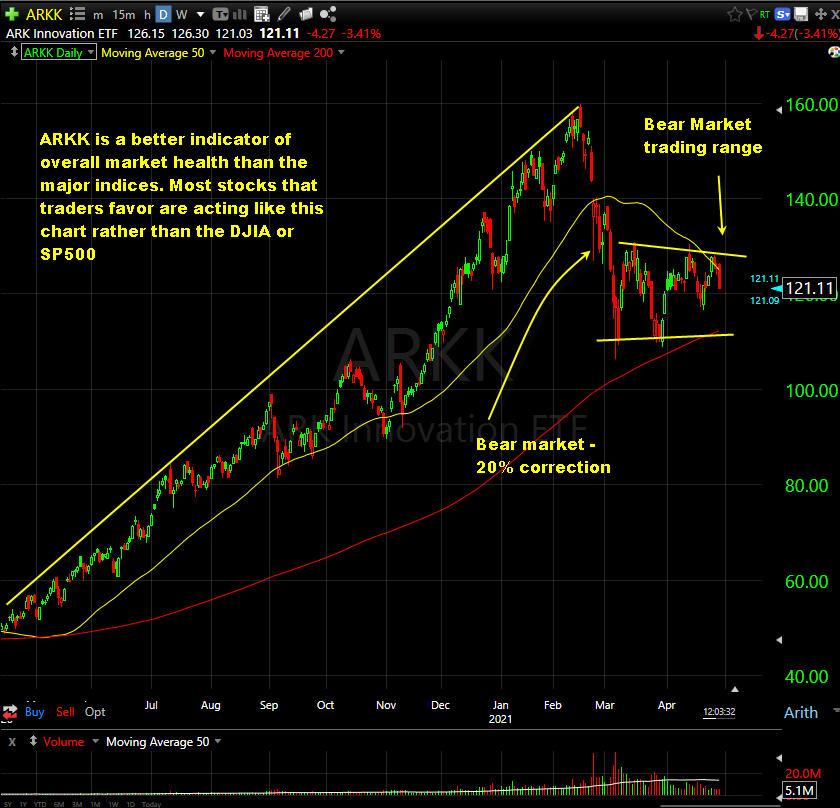 Get an email alert each time I write an article for Real Money. Click the "+Follow" next to my byline to this article.
TAGS: ETFs | Index Funds | Indexes | Investing | Markets | Small Cap | Stocks | Trading

FuboTV Is Not for the Faint of Heart

I prefer spreads as individual calls and puts can be a bit pricey.