You could have blown me over with a feather when I saw that this week's Investor's Intelligence bulls did not tick down, but ticked up. OK, it was marginal, to 55.3% from 55.1%. But that is not where you want this sentiment indicator when we've already been correcting for more than two weeks. 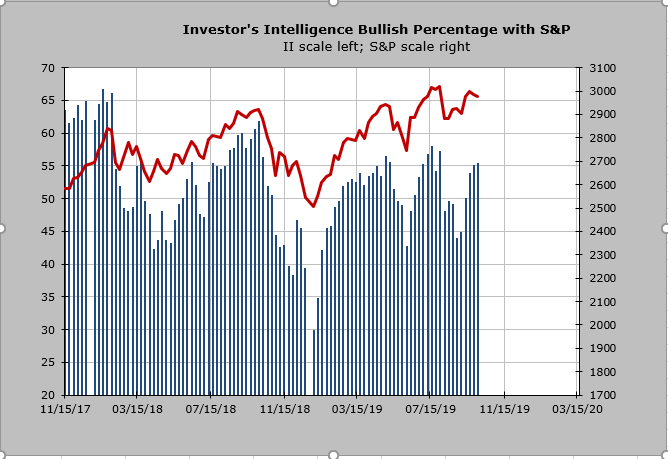 I guess I just don't see a consensus in any of this. I don't see where everyone is too bearish yet. I figured for sure we would get there with a move down. I was wrong.

As for the statistics, breadth finally took it on the chin. Now let me explain. Breadth hasn't been great, as I noted here Monday, it lagged quite a lot on that day's rally, but we haven't seen one of those days where breadth is really negative. We did finally see that on Tuesday.

I still have a very funky situation with my Overbought/Oversold Oscillator, where just based on the math it isn't really oversold the way it ought to be by now, mostly due to breadth being so wishy-washy of late. The charts, however, make them look oversold.

The McClellan Summation Index is still heading down, and that tells us what the majority of stocks are doing; it turned down over a week ago. When I plug in what it will take for it to stop going down, I discover that it would require a net differential of positive 2,200 advancers minus decliners on the New York Stock Exchange. Once it gets to positive 2,000 or more, it has stepped a toe into oversold territory and it can go more.

Typically after the Russell 2000 has been red for nine of the last 11 trading days -- and, yes, it has -- I would start plugging in lower closes for Nasdaq to see when the Nasdaq Momentum Indicator gets oversold. For that to be considered a good oversold, I want to see lower closes for Nasdaq and the indicator goes up. No matter what I plug in, in terms of lower closes, for the next week or two, the indicator does not go up. It would go up if I plugged in a higher close, but that's not the way I use it.

Then there are the number of stocks making new lows. You already know about Nasdaq's increase to triple digits and the rise in the 10-day moving average. Tuesday the NYSE saw new lows double from the previous day to 53. 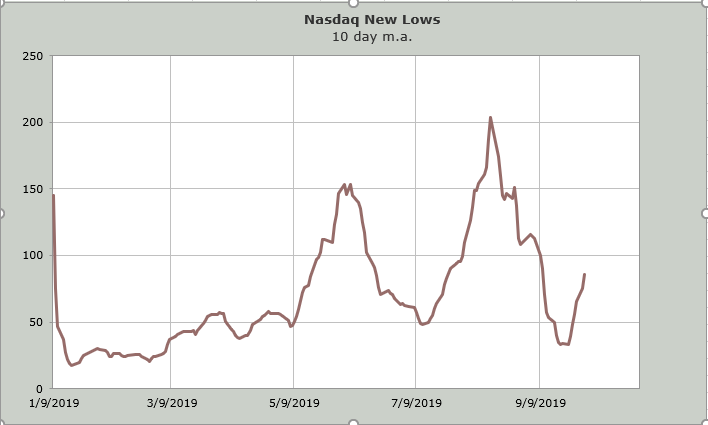 Many of the major indexes are filling their early September gaps, and there is some sort of modest oversoldness, so we could bounce, but it still doesn't feel like a "good" oversold to me.