The near-term chart trends of the major equity indexes remain mostly neutral except for two that are bullish. Market breadth remains positive.

So, where does this leave the markets right now? 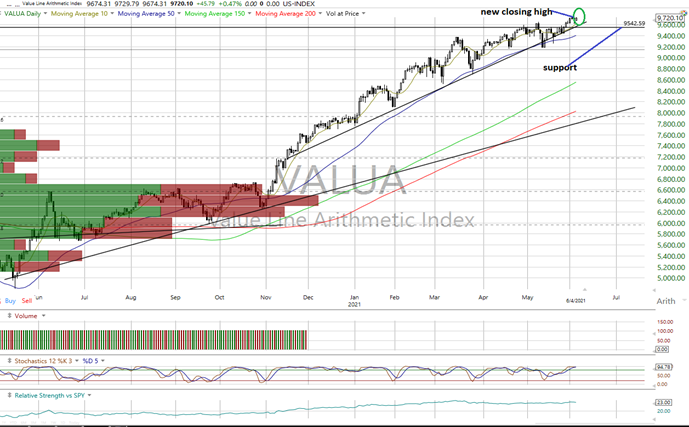 All the major equity indexes closed higher Friday, except the Dow Jones Transports, with positive internals as all closed at or near their intra-day highs.

The close found the Value Line Arithmetic Index (see above) making another new closing high while the Nasdaq Composite closed above resistance and is now short-term bullish. Regarding the Value Line index, we reiterate that its large component population combined with a lack of market weighting offers a more even-handed view of the equity markets and, as such, adds a positive tone to the markets in general.

So, the Value Line index and Nasdaq Composite are near-term bullish with the rest staying in neutral trends.

Market breadth remains positive on the All Exchange, NYSE and Nasdaq cumulative advance/decline lines while the stochastic levels remain overbought on all the charts except the MidCap 400, which gave a bearish stochastic crossover signal Friday.

The McClellan 1-Day Overbought/Oversold Oscillators are neutral on the All Exchange and NYSE while the Nasdaq is now mildly overbought (All Exchange: +47.84NYSE: +42.38 Nasdaq: +51.38).

The Rydex Ratio (contrarian indicator), measuring the action of the leveraged ETF traders, dipped to 1.17 but remains in bearish territory.

Last week's AAII bear/bull ratio stayed neutral at 26.58/36.64. The Investors Intelligence Bear/Bull Ratio (contrary indicator) saw another drop in bullish sentiment to 16.8/51.5 but remains bearish. The drop on AAII and II % of bulls is an improvement from what we had previously viewed as an excess of bullish expectations.

The Open Insider Buy/Sell Ratio dropped to 26.3 and remains neutral. In our opinion, it continues to show a lack of buying interest on their part.

Valuation continues to appear extended with the forward 12-month consensus earnings estimate for the S&P 500 from Bloomberg rising to $191.13 per share. The S&P's forward P/E multiple is 22.1x with the "rule of 20" finding fair value at 18.4x. The valuation spread has been consistently wide over the past several months while the forward estimates have risen rather consistently.

The 10-year Treasury yield closed at 1.56% and near support. We view support at 1.55% with resistance at 1.63%. We continue to believe the moves in the 10-year yield may well have the greatest influence over the near-term action on the equity indexes.

We remain near-term "neutral/positive" in our macro-outlook for equities.

What's going on inside the head of the Fed Chair or anyone sitting on the committee (FOMC) as they roll into Wednesday afternoon's block party?