More new closing highs and near-term uptrends. So, what's to worry about?

While the charts of the major equity indices remain bullish, some of the data has intensified its cautionary signals and suggest to us short-term risk has become more elevated. We believe this may result in some pause or partial retracement of recent gains.

Only the S&P 500, DJIA and Nasdaq 100 closed lower Tuesday as the rest posted gains. Internals were mixed on the NYSE and positive on the Nasdaq.

Also, the Dow Jones Transports finally closed above resistance, which shifted its short-term trend to positive from neutral.

As such, all of the charts are now near-term bullish.

Meanwhile, breadth remains positive with the cumulative advance/decline lines for the All Exchange, NYSE and Nasdaq staying bullish.

However, the stochastic readings are all in the high 90s, with the exception of the Dow Transports, suggesting overbought conditions prevail. Yet, no bearish crossover signals have been generated at this point.

In addition, the leveraged ETF traders, measured by the detrended Rydex Ratio (contrarian indicator see below), moved even deeper into bearish territory at 1.41 from the prior 1.35 reading and are now very leveraged long.

The detrended Rydex Ratio is 1.41 (bearish). 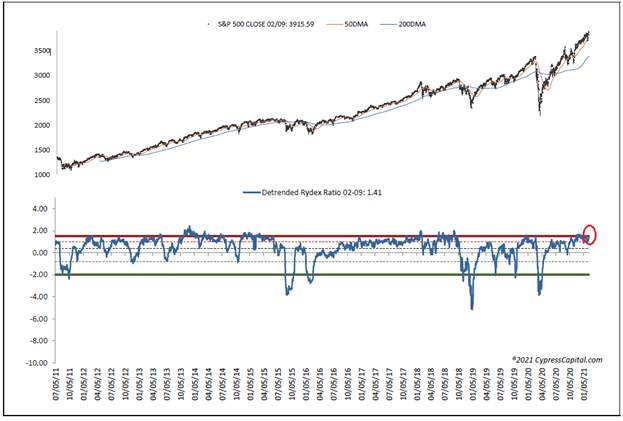 In contrast, the Open Insider Buy/Sell Ratio (see below) has now officially turned bearish as insiders intensified their selling to 21.5 from their prior 25.9 level. We reiterate, we have found the Rydex/Insider dynamic at current levels to be a prescient indicator regarding market pullbacks or at least pauses. It may not pinpoint the exact moment but is well worth heeding, in our opinion. 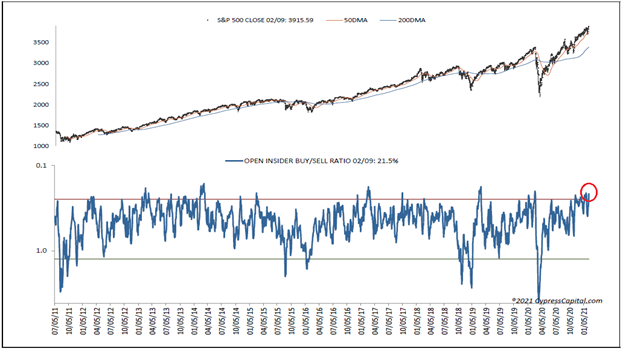 Valuation continues to appear extended. The forward 12-month consensus earnings estimate for the S&P 500 from Bloomberg rose to $172.29 per share, leaving the S&P's forward multiple at 22.8x, while the "rule of 20" finds fair value at 18.8x. The valuation spread has been consistently wide over the past several months while the forward estimates have continued to rise.

For the reasons noted above, we are staying "neutral" in our near-term outlook.