It doesn't get much crazier than this. Look at the list of the 15 largest companies reporting after the bell Tuesday: 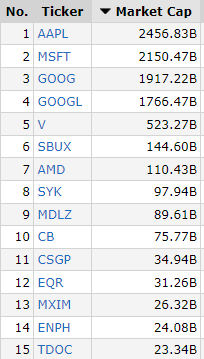 If you don't read tickers like a second language, then maybe a few names escape you but the fact that there are two companies with more than two trillion-dollar market caps, along with one closing in on a two trillion-dollar valuation is amazing. The headlines are always hard to keep up with when Apple (AAPL) , Microsoft (MSFT) , and Alphabet (GOOGL)  report on the same day.

And tonight we'll add in Advanced Micro Devices (AMD) and Maxim Integrated Products (MXIM) on the chip and technology side, Teladoc Health (TDOC) on the heath tech platform/stay-at-home side, and Visa (V) plus Starbucks (SBUX) for a look at retail and expenditures. In short, this is going to be an incredibly informational evening. It's also going to be hectic to keep up with price movements.

The tech side of the market is getting beaten up Tuesday, but small-caps continue to underperform. Granted, today, it is more of performing in line with the Nasdaq, which is the worst performer of the biggest indices. At times, it is doing a little better, but overall, being one-tenth percent better on a 2% down day isn't anything noteworthy.

Unfortunately, I don't feel like we're going to find a bottom in small-caps or enthusiasm around them until the large-caps step aside. And by that, I mean get hit hard first. I'm looking for a quick drop to around the 50-day simple moving average on something like the Nasdaq. Of course, small-caps would get hit as well, but if they didn't get hit as hard, I believe there would be a draw back into the smaller names. Right now, those names are death. China is death too.

This feels like more than just the summer doldrums. To put it in relationship terms, we're "working through some stuff." Until we get through this, I would expect big volatility through this earnings season.

While the names reporting Tuesday night would be a great opportunity to get a possibly needed washout, with the market down heading into the last hour, I'm worried we'll get buy the dips here. That might change if we rally into the close, but if the Nasdaq is lower by 1.50% or more then I expect we'll see buyers come in on the earnings release from names like AAPL and GOOGL. Basically, I expect them to go higher if that's how we enter the release news. That being said, this could be a great opportunity for that washout.

I'm going to watch from the sidelines in these names and pass on involvement into earnings.

Get an email alert each time I write an article for Real Money. Click the "+Follow" next to my byline to this article.
TAGS: Earnings | Investing | Markets | Stocks | Trading | Technology | U.S. Equity