Coring the apple? Maybe. Maybe not so fast. Let's explore.

Apple (AAPL) , the greatest consumer electronics company in the history of the world, reported the firm's fiscal fourth quarter financial results on Thursday night. These results were disappointing. The firm posted GAAP EPS of $1.24 on revenue of $83.36 billion. Earnings landed right on consensus (well below the whispers), while revenue fell almost $2 billion short of Wall Street's expectation. Incredibly, these numbers also represent earnings growth of 70% on revenue growth of 29%. Talk about great expectations.

During the call, CEO Tim Cook stated that he felt that shortages in the supply chain and lingering effects from the pandemic probably cost Apple a rough $6 billion in sales. Apple CFO Luca Maestri added the situation will not resolve itself this year, and that the negative impact to the current quarter will be larger than that $ billion that the CEO mentioned for the September quarter, despite the fact that the reporting period does not include data for the new iPhone 13. That's all the overnight crowd needed to hear. "Sold" is what they said under their collective breath, as they pressed their order entry buttons.

As with the firm's headline performance, individuals business lines within the product segment for the most part did very well relative to past performance, but fell short of expectations. Products produced sales of $65.083 billion, up 30% year over year, while failing to meet consensus. Services, however, were again, a bright spot. Services contributed $18.277 billion (+25.6%) in revenue, well above the $17.75 billion that Wall Street was looking for.

What folks need to remember about the services segment, is that it is not directly impacted by shortages of semiconductors and other components, other than the fact that limited sales of the firm's product also limit Apple's installed user base, which does not yet seem to be a problem at this point. The Services segment is also a high margin business. The segment ran the quarter at a gross margin of 70.5%, well above Apple's firmwide gross margin of 42.2%. To illustrate, Services for the fourth quarter comprised 21.9% of sales but 36.6% of operating income.

As for the Products segment, iPhone contributed $38.868 billion in sales, up 46.9%, but also almost $3 billion short of projections. iPhone, by the way... still comprises 46.6% of all firm-wide sales. The second largest component of the Products segment is Mac. Mac sales increased 1.6% to $9.178 billion, which was short of consensus. Wearables, Home and Accessories kicked in $8.785 billion in revs, well short of Wall Street's view, but good for growth of 11.5%. iPad (my favorite Apple gadget) brings up the rear with sales of $8.252 billion, good for impressive growth of 21.4%, and also the only one of these four product business lines that actually beat Wall Street.

Apple has not offered forward guidance since the start of the pandemic. The firm stuck to that practice for this reporting period. However, aside from offering any official guidance, Tim Cook, after it was already understood that shortages are still impacting the firm's sales, commented on how strong demand still is, which we know to be true. Cook expects 'to achieve very solid year over year revenue growth and to set a new revenue record during the December quarter."

Apple ended the quarter with a net cash position (cash, equivalents and marketable securities) of nearly $63 billion, down significantly from a year ago. Current assets, however, are only down a rough $9 billion over the past 12 months, as the reduced cash balance is to a great degree offset by an increase in accounts receivable. People pay their bills? Then all is good. Inventories are up a couple of billion in dollar value as well.

Current assets still outweigh current liabilities, however there has been significant growth in accounts payable and term debt. Total assets are much larger than total liabilities less equity, but there was growth in long-term debt as well. The balance sheet is fine as you well expected. That said, I liked it more a year ago than I do today.

Apple returned $24 billion to shareholders during the past three months, including $3.6 billion in dividend payments. Turning to cash flows, the firm produced $93 billion in free cash flow, and as you know has committed to being net cash neutral over time. What that means in floor broker speak... is that often enough the guy buying the stock next to you is the company itself. 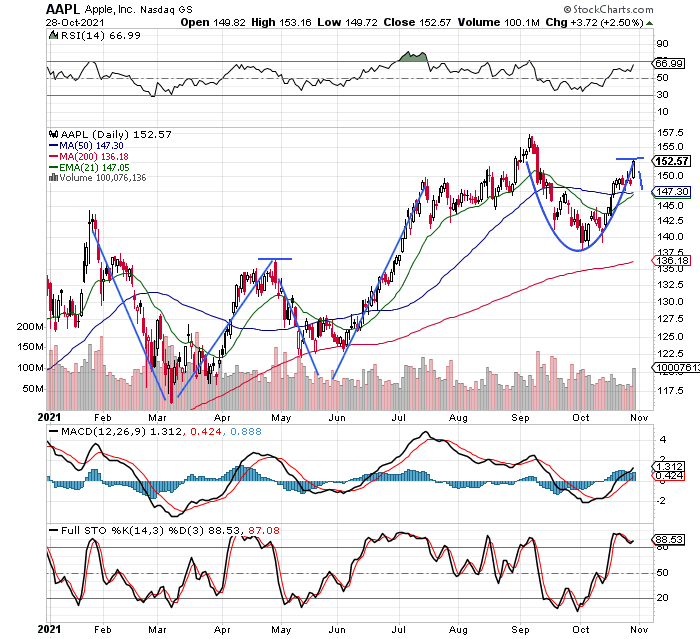 This is almost too good to be true. Let me show you.

Readers will see that Relative Strength, the Full Stochastics Oscillator and the daily MACD were all hoping that Apple's stock would take a little tumble. That's exactly what they'll get this morning with support possibly found at the cross-section of the 21 day EMA and the 50 day SMA.

Ladies and gentlemen... we are about to witness the development of a handle being added almost automatically to the two month cup pattern. What this will do is move the pivot from the left side of the cup to the right. "Sarge, are you telling shareholders that they want this selloff?" Bingo, cowboy. This selloff is exactly what we want. The pivot gets knocked down a rough $5, and thus, a technical catalyst for a breakout... in essence becomes easier to reach.

I am not saying that this is easy money. What it is, is an opportunity... to add at a discount ahead of a year that is setting up as the year that renewed supply meets probably inelastic demand. I am fired up, my friends.

Get an email alert each time I write an article for Real Money. Click the "+Follow" next to my byline to this article.
TAGS: Earnings | Investing | Markets | Stocks | Technical Analysis | Trading | Software & Services | Technology | Technology Hardware & Equipment