By STEPHEN GUILFOYLE Jul 11, 2019 | 12:00 PM EDT
Stocks quotes in this article: BBBY, WMT, TGT
This morning, my area lost power as I sat down to write my Market Recon note for Real Money. That's not so tough. I just had to pack up a laptop, and drive to someplace where lights were visible, sit down and get back to work.
I have had tougher jobs. Jobs where performance is judged by one's last trade. Jobs where tomorrow was only a sure thing on Friday. Jobs where one battled miserable climates, or dealt with wild animals that, on occasion, eat people.
That's nothing.
I have never, nor do I ever, want to be the interim -- or permanent -- CEO of Bed Bath & Beyond ( BBBY) . Poor Mary Winston. She does not dig holes in the ground. She does not sleep a few feet above the ground, so who knows what doesn't creep up on her. She does not spend weeks in the snow. She has been running Bed Bath & Beyond for less than two months, and for that, we wish her well.

There Was A Time

I remember a time when my wife would drag me out to our local BBBY, with a 20% off coupon in hand and we would search for whatever it was that she said we needed. I complained, but I really did not mind. I kind of liked Bed Bath & Beyond, and I liked hanging around with my wife. That experience changed dramatically over the years (the shopping part of said experience). Probably a year ago, I finally gave up for good. Too many times I had left the store in disgust only to find what I needed in Walmart ( WMT) or Target ( TGT) , and that was before I became truly comfortable with e-commerce (I'm kind of old). Mary Winston understands. I can tell.
I have found that if shoppers really enjoy understaffed stores, items with no labeled pricing, and lines at registers that never seem to move, then step right up: Bed Bath & Beyond stores, or at least the ones near me, are just your cup of tea.
For the first fiscal quarter, the firm reported an adjusted earnings per share of 12 cents, which exceeded expectations. That print also deserves an LOL. That adjustment was a more than $400 million impairment charge, disclosed only as "Goodwill and trade-name impairments related to the North American Retail reporting unit, and trade-name impairments related to the Institutional Sales reporting unit."
Ah, thanks for the clarification. Let's invest our retirement money now. You think... Probably won't happen again, right? Wrong. This time was the "again." Bed Bath & Beyond pulled the same stunt last quarter, only for more than $500 million, so I guess this is a significant improvement? Include the charge... play the game by Generally Accepted Accounting Principle standards, and the earnings per share print drops just a bit... to a loss of $2.91. Kind of paints a different picture.
In addition to the firm's "profitability," sales printed at $2.57 billion, or a drop of 6.5% year-over-year, while same-store sales showed an incredible decline of 6.6%, far worse than the 3.8% decline that the analyst community had anticipated. The firm guides the full year toward the lower end of ranges, for both adjusted earnings and revenue laid out earlier this year.
Why do I think Mary Winston understands? Simple. Winston states, "We need to give our customers a reason to keep shopping in our brick and mortar stores, and in order to do that we must update and enhance store experience."
Winston has obviously tried to shop in one of her locations. The big question is just how to enhance? How to bring us back? The firm runs with cash and cash equivalents of $700 million, plus an additional $200 million in short-term investment. That's up against long-term debt of just under $1.5 billion. Total liabilities are rising faster than total assets.
Do I like the name? No. Will they be here tomorrow? Tomorrow? Yes. 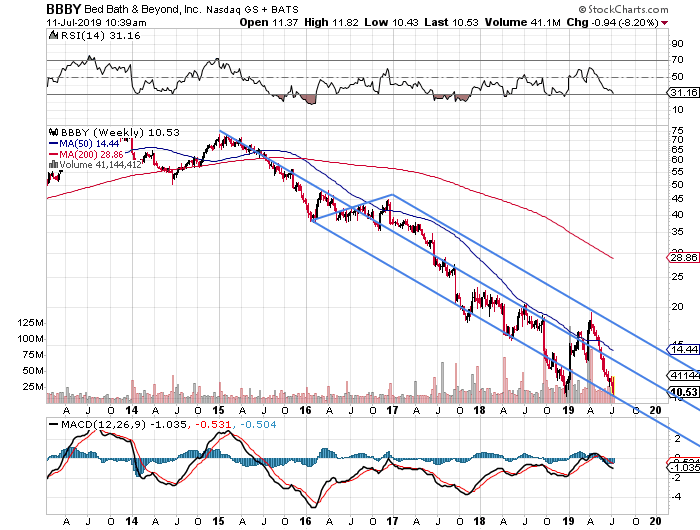 It's not everyday that you see a largely unbroken five-year Pitchfork model. Then again, there's always an exception. Incredibly, after all this time -- after countless consecutive quarters of double-digit percentage earnings contraction, after reducing the share count by 43% over six years and a repurchase program still ongoing (that's what I call some serious dollar cost averaging) -- this chart is simply beyond belief. It would be difficult to find a worse case of under-performance anywhere among still relevant firms.
Would I buy shares of BBBY? Not with your money. Even if I didn't like you -- and I do like you. If one were already long and wrong these shares, can anything be done at this point? One could sell January 2020 $12.50 calls against the position. They're still worth a buck. Damage control.
Get an email alert each time I write an article for Real Money. Click the "+Follow" next to my byline to this article.
TAGS: Investing | Stocks | Food & Staples Retail | Retail