By TIMOTHY COLLINS Nov 07, 2019 | 01:12 PM EST
Stocks quotes in this article: QCOM, XLNX
Maybe chips aren't dead. Maybe 5G isn't as distant to top- and bottom-line business as we're currently pricing in the market. Obviously, Qualcomm  ( QCOM) showed the markets that a chip stock can beat numbers and guide higher. Granted, the company pulls a lot of revenue and margin from its licensing segment, but a swing in sentiment might start there.
I'm keeping an eye on Xilinx ( XLNX) . The company delivered strong second quarter earnings a few weeks back, but third quarter revenue guidance of $710 million to $740 million was well short of the $844.9 million estimate Wall Street held. For the full year, the company expects revenue in the $3.2 billion to $3.28 billion range, which is $110 million to $200 million shy of estimates. Given that Q3 will be $100 million to $135 million short of estimates, we can conclude it holds most, if not all, of the full-year miss.
Huawei Technologies plays a major role in this miss, so it's not about poor product sales or missing the market or even losing out to competition. Management stated 5G demand is strong. This is a political impact, not a business one. Yes, it has the potential to be drawn out, but unless we see Huawei run into the ground, that business should come back. In other words, the political impact isn't a killer of Xilinx, and while it may be short-term, it isn't indicative of overall business demand.
After that disappointing late October report, shares have broken above a bearish wedge pattern. The bulls did manage a higher low along with the lower highs, but shares broke out on Monday, essentially rendering the consolidation pattern as a marked low. Now, we're seeing a new flag created this week. My focus is on the 50-day simple moving average (SMA).
Xilinx hasn't traded above that level since the end of July. It has been the spot where sellers have knocked back the stock three times this week. I wouldn't want to buy right here, right now because another knock back will put us in the $94-$95 range, but a close above $97.50 should put us on a path to $100. That's where things get really interesting, since there is a gap waiting to be filled to $104. 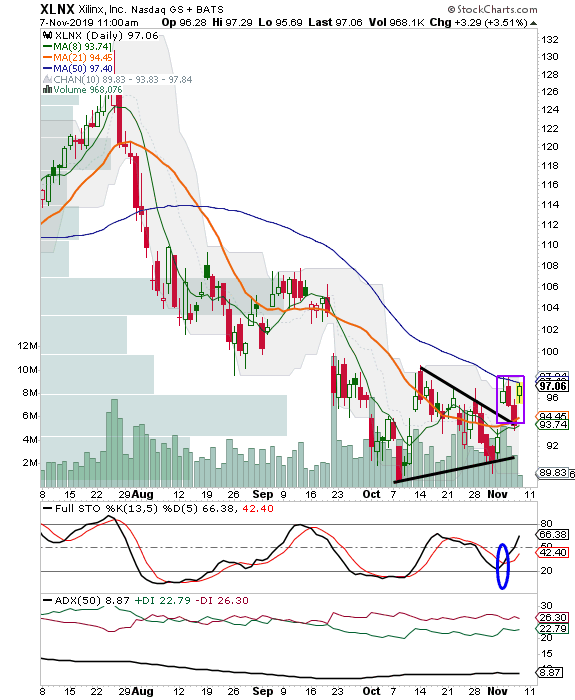 Again, keep a close eye here is you are looking for some long side, especially in recently beaten down and 5G-related names. Xilinx is a quality name that has suffered from bearish political action, not mismanagement or missed business opportunities.
Get an email alert each time I write an article for Real Money. Click the "+Follow" next to my byline to this article.
TAGS: Earnings | Investing | Stocks | Technology Hardware & Equipment | China