For his first Executive Decision segment of "Mad Money" Monday, Jim Cramer spoke with Marc Casper, CEO of Thermo Fisher Scientific Inc. (TMO) , which just received an emergency authorization from the U.S. Food and Drug Administration (FDA) for the use of its Covid-19 test.

Casper said Thermo Fisher's test will be available in more than 200 labs and has the ability to provide results in as little as four hours. He said samples will be collected at doctors' offices and testing facilities and sent to its expanding network of equipped labs. Thermo Fisher began shipping 1.5 million test kits and are ramping up production to support 2 million tests per week with further capacity planned for up to 5 million per week. Cramer asked Casper how Thermo Fisher's test compared to other Covid-19 tests and Casper responded that the only competitor is the virus itself. He said everyone's tests are needed and the more capacity we have, the better.

Let's check out the charts of TMO to see if they are following the broad market or if they can blaze a new trend.

In this daily bar chart of TMO, below, we see that prices have declined since the middle of February but there are now some positives. TMO has fallen below the 50-day moving average line and then rebounded to fail at the underside of that line, showing that the line reversed roles from support to resistance. The slope of the 50-day line is now negative. TMO has also fallen to close below the 200-day moving average line, which is just now cresting.

Trading volume has been heavier so far this calendar year and the On-Balance-Volume (OBV) line has turned down from around the middle of February. The 12-day price momentum study in the bottom panel shows a higher low from late February into March. This is a bullish divergence when compared to the price action, which shows lower lows. The pace of the selloff has begun to slow and that is a positive.

In this weekly bar chart of TMO, below, we can see some weakness and some promise. Prices have declined to close below the 40-week moving average line and the line is just now peaking. The weekly OBV line shows more of a choppy pattern the past four months and that is a little better than if the line declined the past four months. The 12-week price momentum study does not yet show a low or a turn, but we are watching for just that to occur.

In this Point and Figure chart of TMO, below, we used daily price data. Here the chart shows a potential downside price target in the $230 area but also that a trade at $263.49 is needed to be a new low for the move down. Maybe this level will hold. Watch. 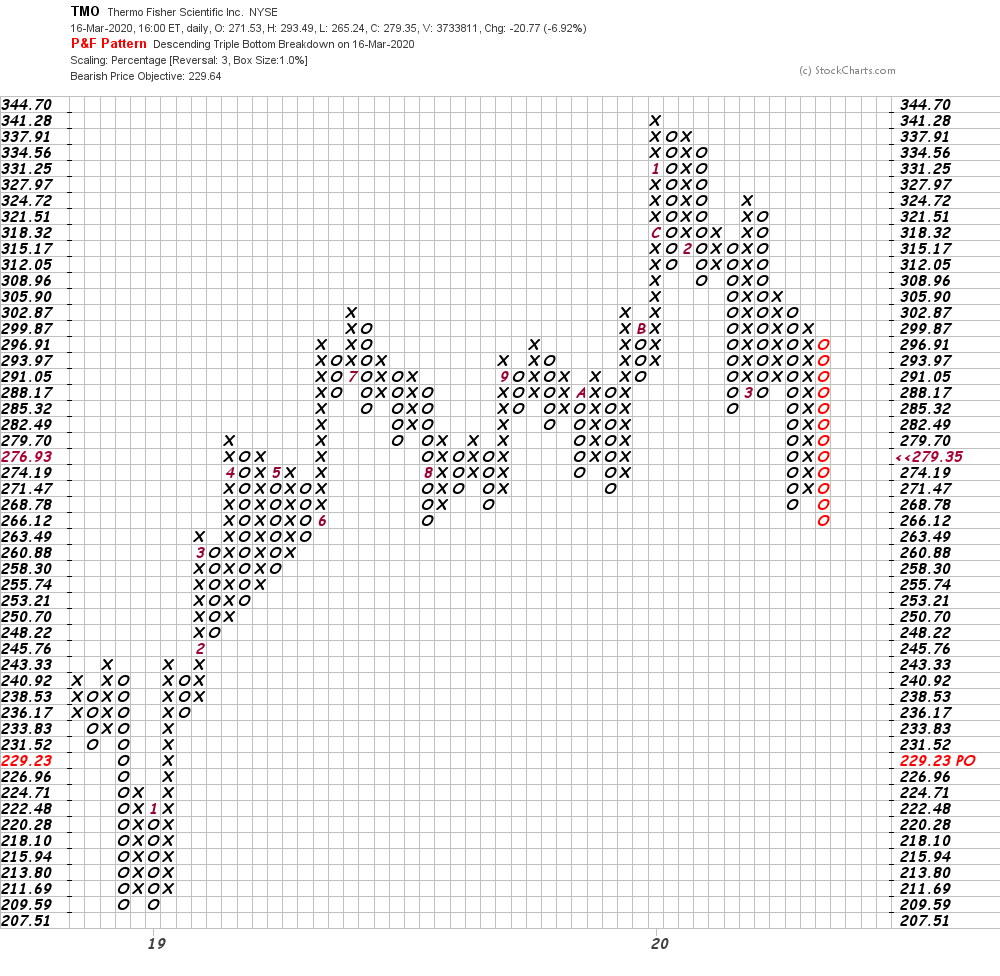 Bottom line strategy: I would be looking for TMO to find some buying interest in the $270-$260 area in the short run. News about the company's testing could mean that investors turn from sellers to buyers.