By STEPHEN GUILFOYLE Feb 10, 2020 | 12:15 PM EST
Stocks quotes in this article: AAPL, MSFT
Tough question right now: How to trade Apple ( AAPL) ? Jim Cramer always says that when it comes to this name, "Own it, don't trade it."
He's right about that. Most of the time. I am a little different, not just in my approach to this name, but also in my approach to the marketplace. I like Apple, and I like it long-term, which is Jim's focus in regard to the Actions Alerts Plus club.
You guys have that voice? You know, the one in the back of your head that dares you to beat the market, or beat a given stock -- to test your skill. It starts out with: "You know, if I were trading this name, I'd probably sell it here."
The plan is usually to buy it back cheaper. Sometimes it gets away. I have one of those going on right now in Microsoft ( MSFT) . Don't get mew wrong, I love Microsoft. That said, I did sell a tranche at $172 for a nice profit with the intention of getting back to full strength once the market was done taking profits. Well, last sale, $184. Good thing I still have the majority of that position in inventory. Done a little better getting in and out of Apple in a timely fashion of late. There's just one thing. All of my analysis concerning Apple, whether it be technical, or fundamental, or that fact that I think CEO Tim Cook is great at his job, had nothing to do with the impact on this firm's corporate performance that will be the consequence of this nasty coraonavirus that is currently making all things connect ed to China just one big unknown.
As most readers know, Apple depends on Taiwanese electronics manufacturer FoxConn for much of the iPhone assembly operations. Most of that work is done at two plants, one in Zhengzhou, and one in Shenzhen. The good news for Apple would be that the plant in Zhengzhou has been given the go-ahead to return to work. Some bad news is that the plant in Shenzhen remains closed. Authorities will take another look at that plant later in the week.
This does not mean that operations at the Zhengzhou plant will quickly return to normal. Workers there still face travel restrictions as well as quarantine. Estimates are only a rough 16,000 workers -- 10% of the folks employed at that plant -- made it into work on Monday. Workers at this plant have been told to wear masks, have their temperature taken regularly, and will have to adhere to a dining system meant to prevent the further spread of this virus. How much will this slow production? I have no experience in trying to work while also fearing the person next to you, but I can say this: In the days following 9/11 in lower Manhattan back in 2001, we did have to work with masks to get the U.S. economy re-opened, and to say that our ability to be productive was negatively impacted is to put it very mildly. Now picture that while avoiding close contact with your co-workers. I can't imagine.
On Monday morning, Trendforce, which is a market research firm, reduced its current quarter estimates for iPhone production to 41 million handsets. This would be a 10% reduction. That's the production side. Now, I want to take you back to Apple earnings released on Jan. 28. Those earnings were solid. Real solid, showing off a high level of execution across many of the firm's business lines. However, the revenue guidance offered was quite wide in its expectation. The firm explained at the time, that this was due to uncertainties created by the spread of this illness.
Now, we know that across China, many Apple stores have been closed, or operating with restricted hours. The plan was to get stores open Sunday. Now the plan is, we hope, for maybe partial openings later on in the week. Last week, Apple told us that these closings would be extended. The firm saw impressive growth last quarter for iPhones, services, and wearables, as well as meaningful traction in attracting new Chinese customers to the Mac product line. In fact, the greater Chinese market accounted for $13.578 billion in net sales, or 14.8% of the firm's total of $91.819 billion -- 14.8% of total sales exposure at risk.
As for the stock: It comes down to a word that so many Fed officials used to use to describe so many economic conditions: Transitory. Will investors see these impacts as transitory, and for how long will that perception hold? If you start seeing more people get sick across the Asia-Pacific region and beyond, it will not take much to rattle investors. Saving grace for investors? So many of these investors are being driven into U.S. stocks and bonds as safe haven. 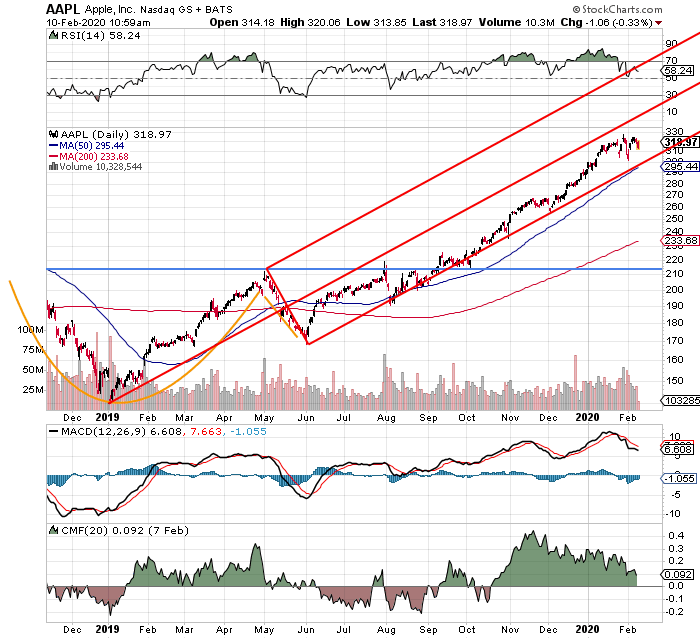 So far, nothing is broken technically. I remain long about a third of what I want to be long. I will continue on the behavior that has worked since that last earnings release. Regular readers already know what that is. For the rest of you, that means selling small in the high $320s and buying small closer to $300. I still believe that there will be a test of the 50-day simple moving average, or the lower trend lines of my Pitchfork, which right now are virtually the same thing.
I will tell you this: While I am more than open to the idea of writing covered calls against any long position where there is enough premium paid to make it worthwhile, I will not be writing puts in any of my tech names until this entire virus is seen in the past tense. Just too much risk involved.
I still believe that AAPL will trade at $400. I don't know when, and I am not willing to bet the farm.
(AAPL and MSFT are holdings in Jim Cramer's Action Alerts PLUS member club. Want to be alerted before Jim Cramer buys or sells them? Learn more now.)
Get an email alert each time I write an article for Real Money. Click the "+Follow" next to my byline to this article.
TAGS: Investing | Stocks | Technology | China | Stock of the Day